Chris Miner's "The Gospel According to a Young American" 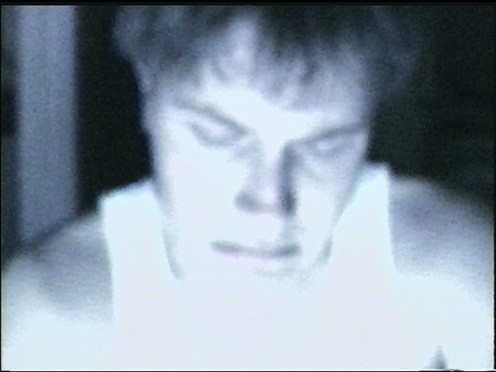 It is difficult to confess. Confessions can be genuine, but the "confessional" is a codified genre, with all the perks and failings of a genre. Starting with St. Augustine and perhaps continuing to James Frey, the confessional has seen some high and low points.

Chris Miner, the video artist and director of Crosstown Arts, knows this well. The artist's latest show, "The Gospel According to a Young American" is a comprehensive retrospective of almost 15 years of video art. Over 40 videos, broadcast on 20 boxy televisions, comprise a record of Miner's confessions— about marriage, faith and understanding. The pieces vacillate between Miner's raw, un-ironic self-professions and deftly ironized portraits of his surroundings.

At its best, the work is both on-its-knees and conscious of that well-worn pose. At its weakest, (and, perhaps, in the most genuinely vulnerable pieces, such as when Miner critiques his Mississippi heritage) the work seems to not know to whom it is addressed: God? Fellow men? The artist himself?

The exhibition, open through February 15th at Rhodes' Clough-Hanson Gallery, is loosely arranged like a church: pew-length tables and TVs are arranged in wings around the gallery, while a single alter-like television sits centrally in space. There is a small side-gallery with humble fabric benches and several televisions placed on low pedestals.

The televisions loop Miner's grainy clips, all shot on a camera and in a style that the digital generation has dubbed, reductively, 'VHS.' Miner favors a slow pace— single frames with minimal action, shots of old photographs, or frames of an unmoving landscape. If there is action in the shots, it is only to show the minuteness of human movement in an otherwise unerring stillness. 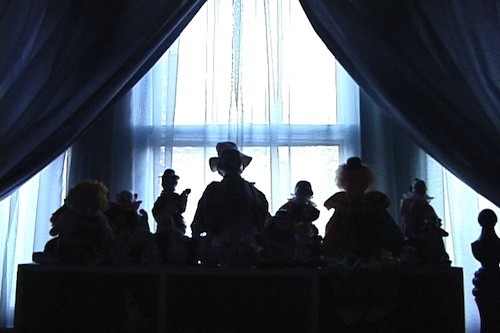 In The Best Decision Ever Made, Miner speaks over progressive shots of his late grandmother's Mississippi home. It is a small, pre-war white house, the sort that still has a root cellar and outdoor laundry line. He films the neighbor's dog pacing behind a wire fence, the sunset coming through winter oaks, the backyard garden shed and his grandmother's immaculately blue kitchen. He speaks at length about the difference between his grandparents lives and his own, ungrounded experiences ("I've been to three different colleges and two different grad schools…I've had five serious relationships with women, none of whom I lived in the same city with more than three months…")

The show's longer pieces allow the artist time to present a complex picture, and to guide the viewer through multi-layered (but rarely meandering) introspections. Many of Miner's shorter pieces are performative, such as Via Dolorosa (As Made Famous by Sandi Patti), in which the artist dresses up like a Christian-channel church marm and sings Sandi Patti's end-of-times dramatic ballad about the life and death of Christ. Via Dolorosa is a great piece— funny, uncanny and accessible.

Others of Miner's short works are less successful. In, Understanding the Complex, Miner interviews a white woman (assumably living on a military complex) who tells stories about how the racial diversity of the complex has shocked her. The woman, framed from a low angle, sits in a black recliner. It appears that her left hand is disabled— a detail that could only be captured from that specific angle. Miner is not present in the video.**

The problem with this piece, and several others like it (one where an old man, surrounded by plaques that say "JESUS" and hunting ephemera, speaks colloquially about his health; one where Miner's mother takes his elderly grandfather on a tour of a Native American craft museum), is that they are a part of the same self-reflexive project as the works that actually feature Miner. They are included as a part of his "Gospel." But, unlike the works in which Miner turns the camera on himself, they lack the important, slippery, narrative quality makes a confession into something more than just a confession.