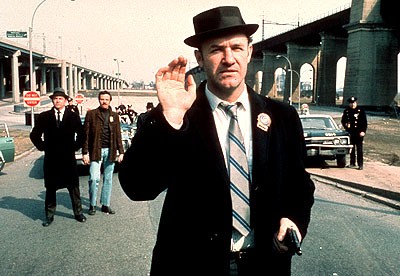 Welcome to the first installment of our ongoing attempts at dream interpretation. Today we take on infinite regress, gritty lawyers and road rage:

Gene Hackman was in a movie in the '70s, and then decades later he was in the same exact movie remade with the same title, almost shot for shot. The opening scene was a bit different. Instead of getting out of his car in an irritated fashion, he parked at the end of a long line of cars. His irritation was more about where he had to park. I remember a long wall, and someone walking away down the top of it, arguing to someone below. The movie had lawyers, and gritty conversations about the law.


Sometimes, in moments of existential frustration, I will reference the opening lines of Stephen Hawking’s A Brief History of Time. Hawking opens his book with an anecdote about an eminent scientist who, while giving a lecture about the nature of the universe, is interrupted by a little old lady who maintains that the world is merely a flat plate resting on the back of a giant turtle. “But,” retorts the scientist, “What is the turtle standing on?” and the lady says something to the effect of “You stupid asshole. It is turtles all the way down!”

It is turtles all the way down! I think this is what your dream is about: Hawking's stacked tortoises might as well be your long line of cars, or a movie that is the same shot for shot, or the bottomless gauntlet of boring B flicks from the seventies. You look for something deeper in your subconscious offerings and find only minor permutations of what you have seen before.


But you need not despair, MD, because if the Cosmic Turtles of Infinite Regress have anything to teach us, it is that we contain unseen multitudes. Same-ness doesn’t preclude depth. Maybe your dream is trying to tell you that something you previously saw as unremarkable was actually the point. You simply need to re-envision it, probably with the help of Gene Hackman. (What was this movie called, by the way? Was it Rest Easy, or You Can Sleep When You Are Dead? Jokes, jokes.)


In honor of Hawking’s little old lady, I will also advise you to check out the paintings of American folk artist Grandma Moses. I once heard an interview with Grandma Moses, who started painting at the age of 78, during which she said, “People keep telling me that the snow is blue. But I look and look at it and I can’t see any blue. So I just paint it white.” Was the snow blue? Was it white? Who knows. The point is that she kept looking.


We here at Exhibit M are taking a stab at dream interpretation, with the help of art and anecdote. Do you wonder what your dreams are about? Send them to: eileen@contemporary-media.com.