A Die-In at the Brooks Museum

This past Wednesday, a collective known as The Memphis Arts Brigade staged a die-in at the Memphis Brooks Museum of Art during a mayoral candidate meet and greet, hosted by the museum and ArtsMemphis. An hour into the candidate event, a member of the Brigade who was costumed as a police officer grabbed the mic and shouted, "Bang! Bang! Bang! Bang! Bang!" Twenty-four protestors then fell to the ground, covering their bodies with signs bearing the names of each of the 24 people killed by Memphis police in the past five years.

The protest comes on the heel of local actions surrounding the death of Darrius Stewart, an unarmed 19-year-old Memphis man who was shot and killed by police officer Connor Schilling in July.

Paul Garner, one of the protest's organizers, said, "We were at the mixer to use performance and art as a way to direct the conversation to include police accountability and police violence." Garner also said that reactions to the protest were mixed: "The performance was met with applause, but that faded quickly and people went back to schmoozing. There were people stepping over people to get cheese and crackers. There were some who appreciated the message and others who didn’t understand."

A die-in calls for protesters to lie prostrate on the ground as if dead. The form of protest gained popularity during the Iraq war and has recently become one of the most visible symbols of the Black Lives Matter movement.

Brooks Director Emily Neff commented, "Art museums like the Brooks are a great and safe place for conversations to be happening about contemporary social, cultural, and political issues.”

The Memphis Arts Brigade said that, though they don't usually announce their actions beforehand, they have more protests planned for the near future. 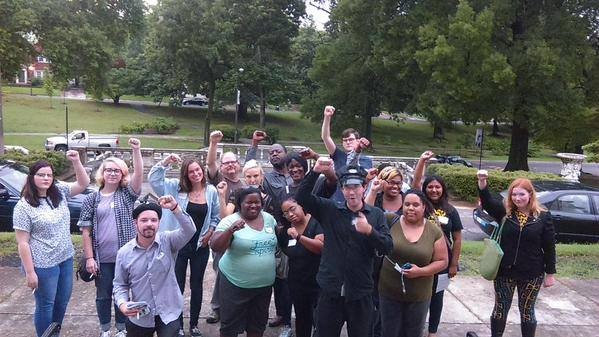