I hate Trump. We are less than a month into his presidency and I think I am going to have a heart attack at how enraged I get just listening to his voice. The press conference this week just about sent me to Regional One. My social media timelines can be summed up with three words, “What the fuck?” The art world is responding. The scene in Memphis is no exception. 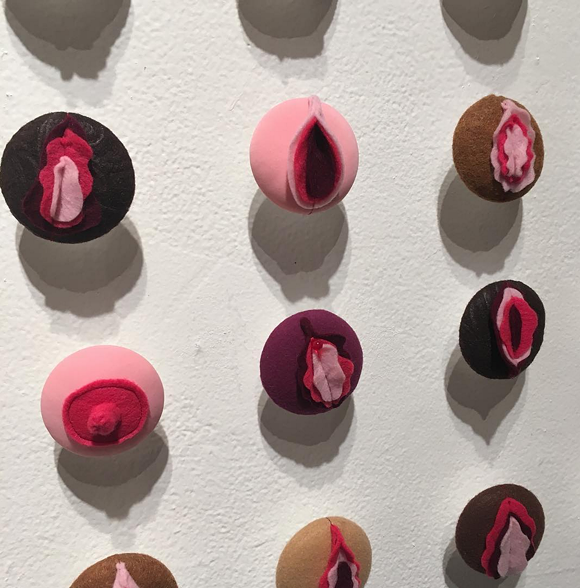 At the beginning of February, Marshall Arts was host to an exhibition that I organized of protest signs that were used in Women’s Marches around the country. Through the weekend, the exhibition "Nasty Women," is on view. Nasty Women is an exhibition curated locally by Chelle Ellis and Danielle Sumler as a response to the Trump presidency, “because sitting around and bitching was never an option for us,” according to Ellis. Some of the proceeds from sales of this politically charged exhibition are going to Planned Parenthood, over $1,700 thus far, another $600 coming just from a donation/tip jar collected at the opening reception. The work can be seen at the gallery Friday and Saturday, 6-9 pm and Sunday, 9 am-1 pm, and by visiting nastywomenmemphis.com. There will be a Q&A with the curators and artists during opening hours Saturday.

On view at the Orange Mound Gallery is "The Black Experience, a Rebirth of Black History Month." The exhibition examines the notion that “although we’ve had a black president for 8 years…we still don’t celebrate Black History Month beyond the use of predictable image and icons.” The exhibition is to celebrate African American history old and new. The show includes the work of well-known Memphis artists Jamond Bullock, Lurlynn Franklin, Lawrence Matthews, Lester Merriweather, Carl Moore, et al. Started by Linda Steele, OMG is located in the Lamar Airways shopping strip, and has been the host of several important community events recently. They are currently only open by appointment, so be sure to follow their schedule of events.

Since I returned from Baltimore seven months ago, there has been no exhibition potentially more important than the Fidencio Fifield-Perez installation at the Memphis College of Art. An undocumented immigrant, his work is strong and impactful. He is an alum of MCA and returns for a lecture March 2nd at the very exact time of 12:15pm. The opening is scheduled for March 3rd, 6-8pm. He was profiled recently in the NY Times as part of the American Dreamers series, stories from young immigrants who were spared from deportations and permitted to work during the Obama administration. Do not miss this exhibition. It is currently on view now until April 18th.

One of the many disastrous things Trumps plans to do as our illegitimate president is to defund the National Endowment for the Arts (NEA) and the National Endowment for Humanities (NEH). On Monday, February 20, 4-6 p.m., ArtsMemphis is combatting these threats with hosting a postcard writing event at Memphis Made Brewery, that includes beer!! The Art Center has donated supplies to create the postcards and ArtsMemphis will provide all necessary information needed to write the cards.