January 07, 2015
1 comment
Have you ever heard of The Streisand Effect? Back in 2003, Barbara Streisand somehow spotted her Malibu home in one of 12,000 aerial photographs of the California coast on a photographers’ website and sued him because she didn’t want anyone looking at her house. But here’s the thing: If she hadn’t pointed out that her home was the subject of one of 12,000 pictures, no one would have known, or probably even cared, that it was there. But now, because of Striesand’s attempt to suppress the photograph, it has its own Wikipedia page. The act of trying to suppress something brought more attention to it than it would have gotten anyway.

You’ve probably heard the story of The Interview by now: Seth Rogan, the “stoner king of Hollywood”, and his friend from the Freaks and Geeks days, James Franco made another of their middlebrow comedy movies to be released last Christmas. The plot involved Franco’s character, talk show host Dave Skylark, getting a chance to interview North Korean leader Kim Jon Un. The CIA, represented by Agent Lacey (Party Down vet Lizzy Caplan), makes them an offer they can’t refuse: Assassinate Kim. Will they do it, or are they too stupid to pull it off?

There are a few times in history when a group of filmmakers have made big, lasting political statements or captured the zeitgeist just right. Chaplin’s The Great Dictator, lampooned Hitler on the eve of war. The backdrop for Casablanca’s love story was a community of political refugees from war-torn Europe, a description that fit many of the actors on the screen. Kubrick’s Dr. Strangelove skewered the insanity of a world preparing to destroy itself with nuclear weapons. Now, to this rarefied list of films, we must add The Interview. And you can blame the Streisand effect for that, because The Great Dictator, it ain’t. 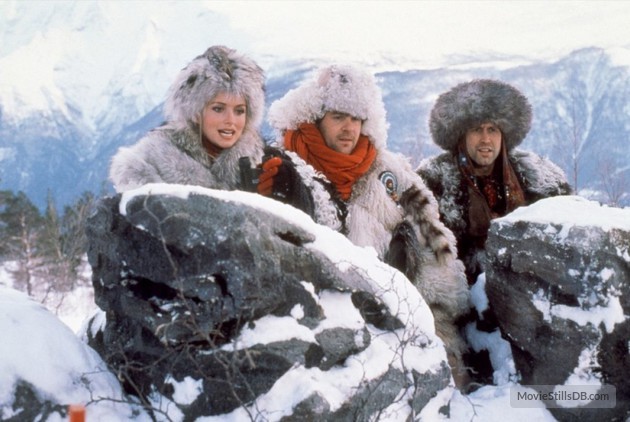 Don’t get me wrong. The Interview is not a bad film, per se. It has some funny moments, and some decent performances by Franco, Rogan, and Diana Bang as Sook, the North Korean handler assigned to Skylark.  It’s a surprisingly old fashioned action comedy in the John Landis/John Belushi/Dan Ackroyd vein. It wants to be The Blues Brothers, but its nearest antecedent would be Spies Like Us, the 1985 John Landis comedy that was originally supposed to star Ackroyd and Belushi but ended up replacing the deceased half of the duo with Chevy Chase. Like Spies Like Us, The Interview has its comic duo (Rogan plays Franco’s producer Aaron Rappaport) as untrained, and none too bright, field agents thrown into a totalitarian Communist dictatorship on a perilous mission of international import. The only reason the filmmakers chose North Korea as a target for humor is because they're the only totalitarian Communist dictatorship still around 25 years after the fall of the Berlin wall, and their internal propaganda looks ridiculous to the West.

But some movies are born great, and some movies have greatness thrust upon them. That’s what happened to The Interview when Kim Jong Un ordered a cyber hit on Sony Pictures after hearing that Hollywood was imagining his assassination. One of the many intertwining ironies of this whole affair is that the actor who plays Kim Jong Un, Randall Park, gives the best performance in the entire movie. Sure, his Kim is a privileged buffoon, but so are Rogan and Franco’s characters. Had the North Korean dictator simply ignored the movie’s provocation—if it can even be said to rise to the level of provocation—it would have made some money providing cheap laughs to theatergoers over the holidays and then been flushed down the memory hole with Spies Like Us.

But as it is, The Interview will have repercussions far beyond the multiplexes of the world. It’s an attack on a private company inside the borders of the United States by a state actor, and the United States has decided to respond. We still don’t know exactly who did it, although I find it unlikely that anyone but Kim was ultimately behind it, no matter who was hired by whom to do the dirty work, for the simple reason that the movie is so innocuous. Equally implausible is the theory that it was all a publicity stunt by Sony, as the damage to that studio is real and likely to be lasting, depending on exactly how many people Sony owes money to that have their lawyers and accountants pouring over the studio’s leaked financial information right now. The decision to pull the movie from release in the face of anonymous terroristic threats makes more sense if you consider that the theater chains were likely more concerned about their IT infrastructure being turned inside out than a physical attack.

Rogan and company didn’t do anything but set out to make a funny movie, and they were reasonably successful. The filmmakers were just artists doing their job, until they got swept up in something bigger. Maybe that’s how art is supposed to work.