Casino (1995; dir. Martin Scorsese)—Heavily edited, poorly dubbed, grotesquely commercial-breaked TV versions of Casino sadden me. I’m happy that Scorsese’s best film continues to rumble across the basic cable landscape in various shapes and sizes at various times of day because exhibition and syndication play a major role in pop-cultural canon formation. But a sanitized version of Casino makes little sense because indiscretion and tastelessness are two of its cardinal virtues.

Trade secrets about the gaming industry and the workings of the Midwestern mob, violent confrontations involving power tools and baseball bats, an endless parade of pastel-colored custom suits so gaudy they threaten to burn out your rods and cones —there’s simply too much in this vulgar American epic to absorb in one sitting. Add in the dueling voiceover narrations, the hold-your-breath instances when the camera rushes at characters like an attack dog, and the car-bomb explosions of raunchy absurdist wit, and you’re likely to feel lost.

The soundtrack does its best to disorient you, too; Casino’s nonstop music (62 songs are listed in its closing credits) is analogous to the constant electronic chatter of slots and video poker machines cluttering nearly every real casino floors. Given so many opportunities to choreograph miniature music videos within the frame of his story, Scorsese engineers perhaps his greatest pop epiphany—a long sequence where a pair of card cheats get taken down as Jeff Beck’s “I Ain’t Superstitious” wails in the background.

But give the movie the time and attention it needs and you’ll start to get it. Then you might start to love it. Casino is Scorsese’s Physical Graffiti, his 2666, his three-hour, thirty-course tasting menu that will set you back an entire paycheck if you add the beverage pairings, which you might as well because you’ve come this far. It is also a vision of craps-table capitalism unfolding in a multicultural American frontier where mobsters, bookies, cowboys, Italians, Jews, Arabs, Irishmen and anyone else who wants a piece of the pie can get in on the action if they’re willing to play. 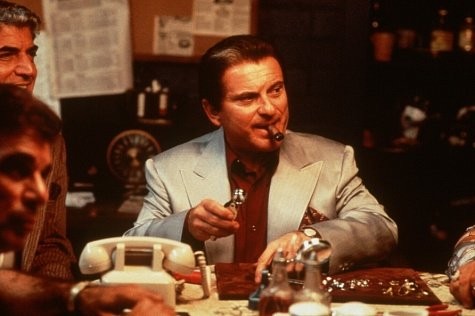 Although the three principal characters—gambler/casino boss Sam “Ace” Rothstein (Robert De Niro), mobster/hellspawn Nicky Santoro (Joe Pesci) and hustler/addict Ginger McKenna (Sharon Stone)—are assholes, their long, painful falls from grace matter because their bosses are much, much worse. Which is why Casino now plays as an apt and timeless statement about the apparently untouchable gangsters responsible for the current (and no doubt future) financial crises bilking us out of our money whether we like it or not. “It’s a pity in this state that we have such hypocrisy,” says Rothstein late in the film. “Some people can do whatever they want; other people have to pay through the nose. But such is life.”