Batman Begins (2005; dir. Christopher Nolan)—Here’s a weird observation about one of the most well-known films by one of the most resolutely “cinematic” filmmakers working today: Batman Begins looks and plays better on television than it did in movie theaters. Its shallow, constricted neo-noir photography translates well to a smaller screen, and its numerous spatial and logical lapses—which range from mildly irksome to maddeningly distracting—aren’t as bothersome when broken up by ads for Rizzoli & Isles every fifteen minutes.

Although the image of Batman perched atop the spire of a building like a Kevlar gargoyle is both Pop Artsy and sly, Nolan’s dour, somber treatment of my favorite comic-book hero is mostly indifferent to or uninterested in humor and/or visual poetry. It is earnest, expository and ever-so-serious. But it is also unusually realistic in two key ways. First, it depicts Bruce Wayne/Batman as what he really (and unavoidably) is—a guilt-crazed borderline psychotic with an undiagnosed multiple-personality disorder who suffers from near-constant mental stress and physical pain. Christian Bale plays Wayne as a slightly less malevolent version of American Psycho’s Patrick Bateman, and love interest Rachel Dawes (Katie Holmes) unconsciously echoes that film’s final lines when she tells him, “Your real face is the one that criminals now fear. The man I loved, the man who vanished—he never came back at all.”

Second, Batman Begins offers the most detailed, nuts-and-bolts superhero-training sequences to date. It spends nearly an hour exploring Wayne’s training with the League of Shadows, reinforcing the importance of theatricality and deception in combat, and fetishizing Batarangs and black body armor. And, miraculously, it makes room for a lovely and honest-to-God fun moment when weapons techie Lucius Fox (Morgan Freeman) responds to Wayne’s question about a giant camouflage-colored APC/AFV sitting in the corner by saying bashfully, “Oh, the Tumbler? Oh, you wouldn’t be interested in that…”

Human-scale humanism is rare in this brutal, nearly blood-free PG-13 blockbuster, but the trio of paternal subordinates watching over and working with Batman—Fox, butler Alfred (Michael Caine), and inspector Jim Gordon (Gary Oldman)—provide much-needed emotional support and average-guy gravitas which balance the fight scenes and Machiavellian meditations on justice, revenge and symbolic power. 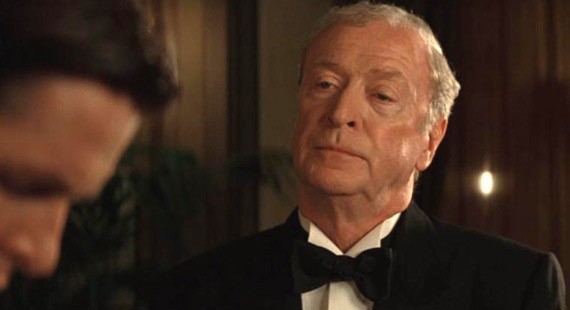 Batman Begins is strong enough to stand on its own, but as its final scene makes clear, it’s equally effective as the first part of a nine-hour epic that accrues considerable emotional power and thematic significance if you ever sit down and watch all three films back-to-back-to-back—a draining, highly enjoyable experience not unlike binge-watching a really good season of a really good TV show.