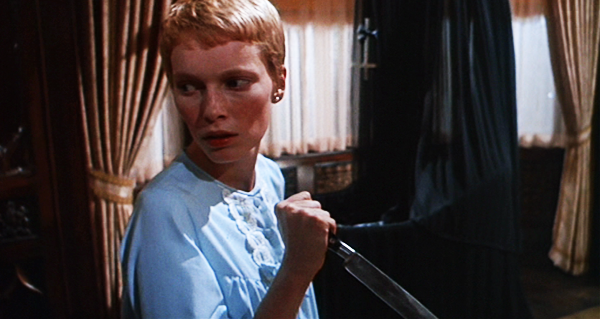 ELAPSED TIME: I watched it all.

WHY DID I STOP WATCHING? Rosemary cedes to Satan. Hail Satan!

Before we get started, I want to apologize. Apologize to myself because this isn’t a review of what I think may be my new favorite spooky movie, A Halloween Puppy, about a silly boy who accidentally magicks his mother’s boyfriend into an English Bulldog. D’oh! I’ve never actually seen A Halloween Puppy but if it is as good as A Talking Cat!?! — the other movie IMDB suggests for people who want to see A Halloween Puppy — it has to be great, right?

Or at least better, for my purposes, than The Exorcist, which I thought about watching last night but couldn’t because I think there’s someone living in my attic and/or my kitchen pantry. A bad, evil, possibly possessed person. I mean, I don’t know for sure, because if this person was living there, primed to kill me, they definitely wouldn’t reveal themselves until I decided to watch The Exorcist alone at midnight. It’s like a Schrodinger’s Cat thing. I’m sure you understand.

I don’t want to let you down (“I came here for CONTENT,” you are doubtless yelling now. “FILM WRITING CONTENT!”) so I watched Rosemary’s Baby. What a relief! Rosemary’s Baby isn’t scary, at least not like The Exorcist. There is a lot of portent, for sure. There is the telling murder of a young dope fiend who has been resuscitated and then possibly killed by a couple of weird old people, the Castevets, who live next door to Rosemary (Mia Farrow) and her husband, Guy Woodhouse (John Cassavetes.) And by the continued illusions to the death of children, all while the misty-eyed and dewy-skinned Rosemary avows her desire for a baby. There is that freaky half-lullaby theme that makes the first half of the movie (which, sans soundtrack, is exclusively about 1960s home design) into something foreboding.

But when the shit is actually going down, when Rosemary is raped by the Devil in a dream sequence (and to hide the truth her husband claims that he did it because he was “loaded” and “it was fun in a kind of necrophiliac way”?!?), the feeling isn’t so much fear is it is familiarity. The movie takes place on the very edge of the utterly normal, turning normal conversations about picture hangings into something slightly nefarious. Perhaps the scariest thing about Rosemary’s Baby is how, in the cumulative scene — when Rosemary discovers that everyone is, in fact, conspiring against her, and that she has, yes, birthed the son of the Satan — there is almost nothing, tonally, to differentiate it from a mundane cocktail party scene. Except that everyone is yelling "Hail Satan!" The movie ends with Rosemary learning she isn’t crazy, and then quietly realizing that she must accept her child and become crazy, because the world is crazy. Everyone she loves and knows is crazy.

It isn’t scary, but it is haunting. Especially considering Mia Farrow’s terrible real-life abusive marriage to Woody Allen, and the fact that director Roman Polanski eventually fled the country to avoid rape charges. And perhaps the most haunting thing about Rosemary’s Baby is not that it is about Satan, but that it is a hysterical rape myth (Satan, Polanski? Really?) constructed around a world that quietly condones the real deal.