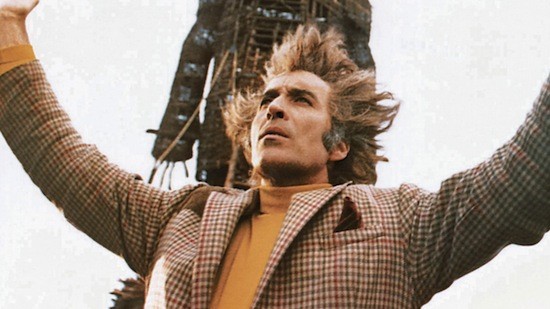 When I say The Wicker Man is a cult film, there are several layers to that statement. The traditional film critic-speak definition of a cult movie is one that was not successful in its original release, but has collected a devoted group of fans over the years. Think The Rocky Horror Picture Show or Evil Dead. The 1973 British film The Wicker Man, directed by Robin Hardy and written by Anthony Shaffer, certainly qualifies under that definition. It barely even got distribution in the states beyond the drive-ins, and yet, four years after its release, it was called “the Citizen Kane of horror movies.” I wouldn’t go that far, but the restored version currently in circulation and showing on Turner Classic Movies is no doubt a cut above your average splatter fest. The film’s cult was big enough to prompt a remake in 2006 starring Nicholas Cage, but that version has been relegated to a punch line along with most of Cage’s late-period work. 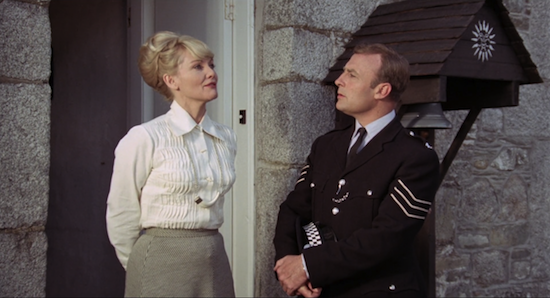 The second layer to The Wicker Man’s cult movie status is that it is literally a movie about a cult. According to Wikipedia, the film had its genesis in a conversation between horror actor extraordinairre Christopher Lee and screenwriter Shaffer. Lee, who had been the star of a string of increasingly fraught horror hits from the British studio Hammer, wanted to do something a little more cerebral and serious, and proposed a story based on “old religion”. Lee would go on to play Lord Summerisle, whose estate is a remote Scottish island with a seemingly normal population of 70s rural Scots. But when police Sgt. Howie (Edward Woodward) is dispatched to the island to investigate the mysterious death of a young girl, he discovers that there are secrets bubbling beneath the islanders’ placid exterior. At first, no one seems to remember the little girl. Then, a schoolteacher Miss Rose (Diane Cliento) admits that yeah, little Rowan did exist, and yeah, she was probably murdered, but it’s not really such a big deal. In fact, it was a good thing. The islanders are part of a pagan cult surviving from pre-Christian days who have existed in secret and isolation to avoid persecution. The devoutly Christian Howie is completely scandalized by the pagan’s free sexuality and bizarre religious practices, but as the film progresses, he is too slow to realize that he is being led into a trap.

Lee’s performance is one of the best in a storied career that spanned into the twenty first century playing Saruman in Lord Of The Rings and Count Dooku in the Star Wars prequel trilogy. He manages to make upbeat happiness blood-chillingly creepy. Woodward, who would later go on to play The Equalizer on American television, is his perfectly uptight foil. The film follows the familiar exploitation template of “one hour of talking, thirty minutes of blowing stuff up”. But in this case, the windup is the payoff, with a series of bizarre images and scenes of the islanders’ rituals juxtaposed with everyday British life in the 1970s. Odd are you’ll get a few laughs at poor Sgt. Howie’s expense, particularly in the scene where he cowers from a beautiful naked woman who just wants to get it on with him. As it turns out, if he had just given in to her advances, things would have gone a lot better for him in the end. And that’s also true of a modern audience’s reaction to The Wicker Man. Just go with all the weirdness, and you will ultimately be rewarded with a killer climax whose imagery has filtered down through pop culture for 40 years.