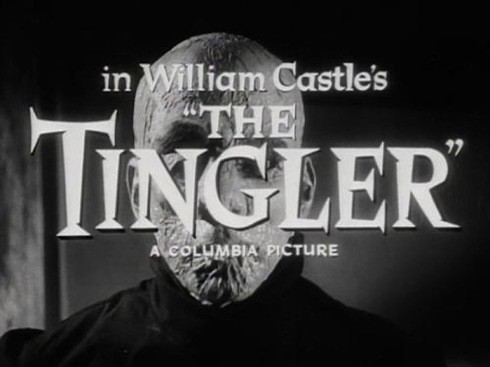 The Tingler (1959; dir. William Castle)—This claustrophobic, stitched-together, thoroughly ridiculous little thriller about (get this) the super-strong, extremely dangerous jumbo crustacean who lives inside human beings and crushes their spines whenever they get too scared to scream (see what I mean?) really freaked me out when I saw it on late-night TV thirty-some years ago. Granted, I was only eight or nine years old at the time, but I had an overactive imagination and I hadn’t taken biology yet. After re-watching The Tingler on TCM last Saturday afternoon, I’m happy to say that 1) it’s in no way as scary as I once thought it was and 2) it works anyway. It’s a lively and surprisingly self-aware slab of artisanal American cheese. 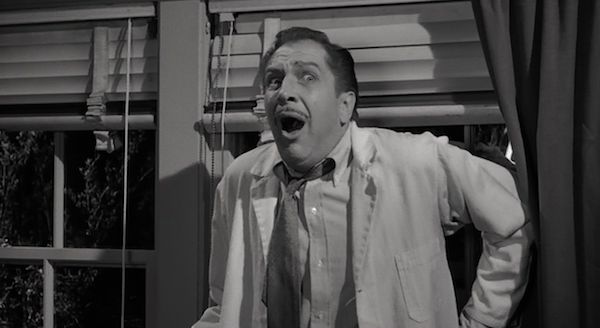 Relaxed, kinky and amoral Vincent Price stars as Dr. Warren Chapin, a cuckolded pathologist who wants to prove the existence of the vertebrae-cracking monster he calls “the Tingler.” The only problem is that he can’t get his hands on one; the Tingler tends to disappear whenever a person screams in terror. And everyone screams when they’re really scared—except, that is, for Lucy Stevens (Pamela Lincoln) a deaf-mute woman who runs a silent-movie theater with her husband, Ollie (Phillip Coolidge). You don’t need a master-class in B-movie tastelessness to imagine what happens next: Warren meets Lucy. Lucy is conveniently left alone one evening. Pretty soon Lucy starts seeing all kinds of crazy stuff in her apartment—machete-wielding zombies, hairy monsters throwing hatchets, sinks filling up with blood, that kind of thing. But Lucy can’t scream to keep the Tingler at bay. And just like that, Dr. Chapin has his latex-gloved hands on the creepy medical breakthrough of the century. If, that is, he can keep it locked in that metal container he put it in…

What’s not to love about a movie that begins with an appearance by director William Castle, who warns you that “some of the sensations…some of the physical reactions which the actors on the screen feel…will also be experienced for the first time in motion picture history…by certain members of this audience” while trying not to burst into giggles? What’s not to appreciate about that meta-textual stretch near the film’s climax wherein the movie itself appears to break down, the screen goes black, and a voice in the darkness urges you to scream as loud as you can because your life depends on it? What’s not to admire about a self-promoting whiz like Castle who rigged several theaters with motors that delivered mild electrical shocks to people sitting in certain seats during the film’s most suspenseful moments? And what’s stopping you from pairing The Tingler with Joe Dante’s Castle-inspired 1993 comedy Matinee for the kind of dream double feature they simply don’t program anymore?