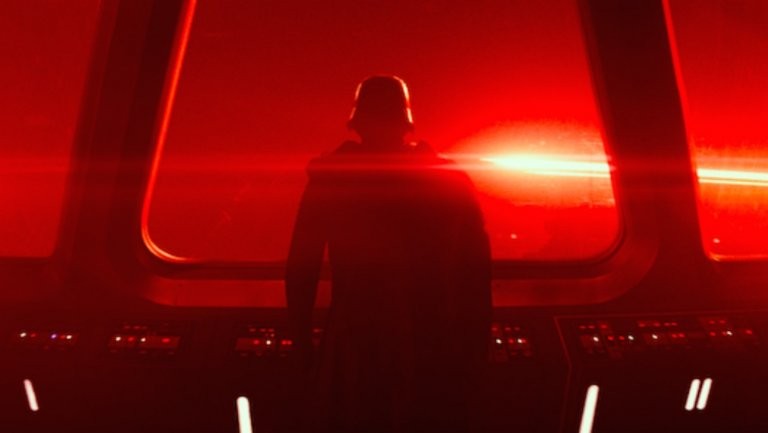 Star Wars fans have spent more than a decade in the wilderness. Sure, there were some great moments in the prequels, but over all, but there’s no denying that the twenty-first century has not been kind to George Lucas’ vision. But our time in the wilderness is over, and we have returned to the promised galaxy.

Star Wars: The Force Awakens is not a perfect film. Parts of the second act are muddled. The galaxy now seems a little less vast, and the political details are undercooked. There are times when the cast are shuffled around unnaturally to feed the needs of the plot. J. J. Abrams simply does not understand how hyperspace works.

But you know what? The prequels gave us complex galactic politics as Lucas tried to transform Flash Gordon into Issac Asimov’s Foundation. Truth to be told, that's what the fans who had obsessed over every detail in the Orig Trig thought we wanted, but we were wrong. I will forgive Abrams for playing fast and loose with the details of a fictional FTL drive cobbled from A Wrinkle In Time, because the tear-stained faces of the faithful streaming out of the 7 PM Paradiso screening last night attested to what he got right.

From Abrams history in TV and film, particularly in his butchering of the Star Trek universe, it’s clear that he’s better at character than plot. That made producer Kathleen Kennedy’s choice of Abrams to helm the reintroduction of Han and Leia a wise one, and her decision to have The Empire Strikes Back writer Lawrence Kasdan riding herd on him one worthy of Yoda. Gone is the unspeakable mishmash of dialog from the prequels. Kasdan’s screenplay is weighed down with an unwieldy cast, but pair of leads emerge in the persons of Harrison Ford and Daisy Ridley. 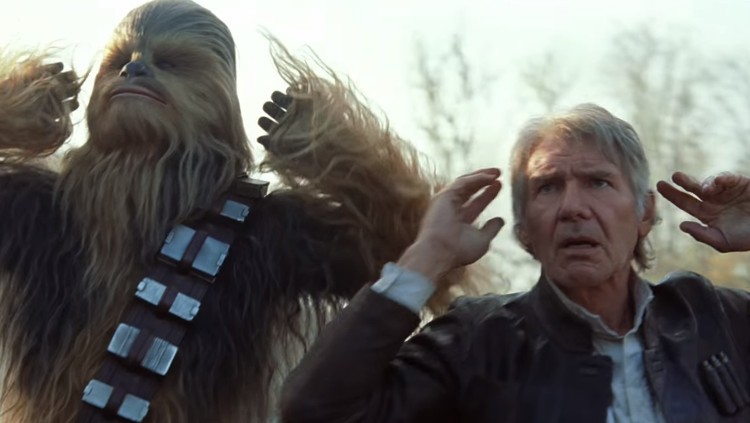 At this point, the only thing that could draw Ford out of a comfortable retirement of recreational aviation and bopping Calista Flockhart is the prospect of taking the controls of the Millennium Falcon one last time. Ford phoned it in for years in one big budget paycheck movie after another, which makes the sight of a fully armed and operational Han Solo something to behold. In the 30 years since the Battle of Endor, Solo has seen personal tragedy. He’s not the happy go lucky rogue any more, even if he’s returned to the pirate lifestyle, but neither is he a broken man. Chewbacca is still at his side, but he’s more than just a furry sidekick this time around. Kasdan and Abrams have made him a full fledged hero in his own right. Carrie Fisher’s Princess Leia is now General Organa, charged with defending the weak and fragmented Republic against the First Order, a fascist movement built from the fragments of the Empire. Leia’s not in the center of the action any more, but when Fisher and Ford share a screen for the first time in 32 years, this reviewer’s tears flowed freely. 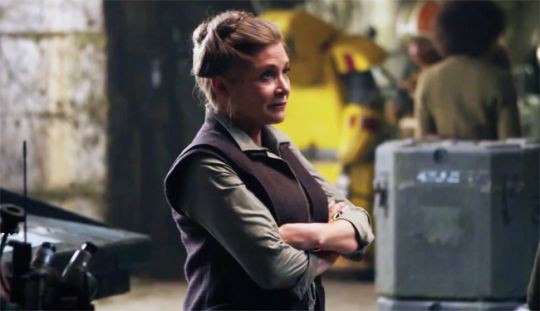 Taking Leia’s place is Daisy Ridley as Rey, an orphaned scavenger on the planet Jakku living off the scraps of the final battle that broke both the New Republic and the Empire’s militaries twenty years earlier. Ridley proved to be the project’s best casting choice, as she easily holds the screen with both legends and talented newcomers. She has the air of a bona fide movie star in the making. Her chemistry with John Boyega, who plays fugitive Stormtrooper Finn as a Cowardly Lion, bodes well for the future films. 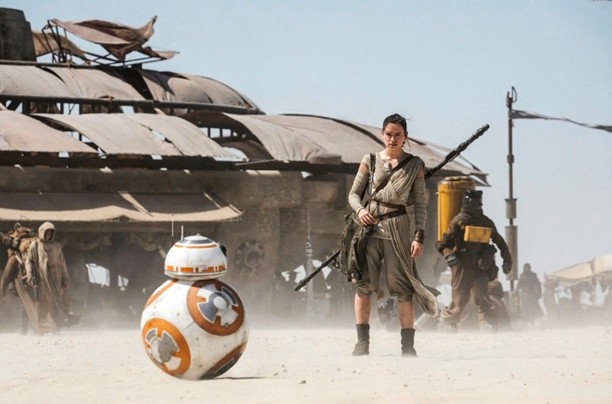 Rey’s opposite is Kylo Ren, played to the hilt by Adam Driver, who attracted attention on HBO as Lena Dunham’s boyfriend on Girls. Driver’s background in post-mumblcore naturalism serves him extremely well, as he paints Kylo Ren not as a cold force of evil nature like Darth Vader, but as a petulant, wannabe punk, prone to fits of rage and delusions of grandeur. To the audience, it’s clear that he’s just a pawn in a larger game being played by the Emperor’s successor, Supreme Leader Snoke (Andy Serkis), but he hasn’t figured it out yet.

I won’t be responsible for spoiling the ending for you, except to say that the emotional climax is devastating.
There are many callbacks to moments in the Orig Trig, but it would be wrong to say that The Force Awakens is a mere rehash of A New Hope. Sure, there’s a formula to these things, but Kasdan and Abrams are doing more than just walking us through the Stations of the Force. It makes perfect sense, for example, for the First Order to pursue the Tarkin Doctrine and construct its own superweapon. In the case of the good guys, no less an authority than Foreign Policy magazine weighed in this morning with this: “In hindsight, it’s clear that, for the Rebel Alliance the Imperial defeat at the Battle of Endor was a classic example of a catastrophic victory: a sudden collapse of a seemingly unbeatable foe that produced opportunities it was unprepared to exploit.”

Like a Chuck Jones Looney Tunes cartoon, The Force Awakens speaks on multiple levels. The kids will respond—strongly—to the swashbuckling and derring do, and the vibrant new stars in the making. For older fans like myself, there is a poignance in seeing how things turned out for our old heroes who won the Star Wars but botched the peace, leaving the next generation to clean up their mess. So it always goes.