January 11, 2016
1 comment
Music Video Monday is usually for Memphis acts only, but today, we make an exception for David Bowie. 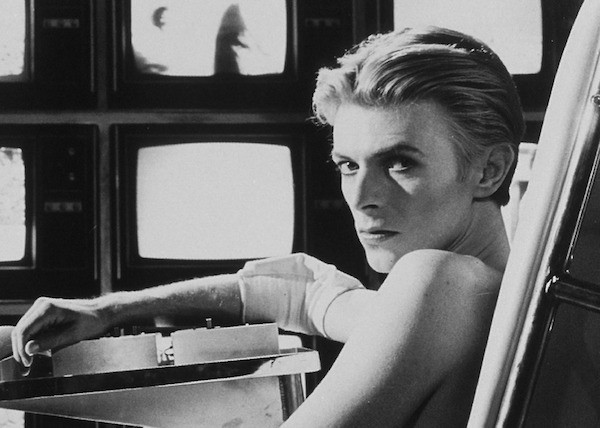 Bowie, who passed away last night, two days after his 69th birthday, was hugely influential in the development of the music video form, even though his career began long before the term was coined. The modern music video has its roots in "promo clips", short films made by record labels to promote their acts, intended to be played on TV shows like "American Bandstand" or "The Old Grey Whistle Test". Promo clips' primary function was to introduce English artists to American audiences, or visa versa, as it was much cheaper to produce a 3-minute short film than it was to mount a transatlantic tour. Bowie's first promo clip was released in July, 1969, intended to coincide with the first moon landing.


But Bowie's ascent to international superstardom didn't begin in earnest for another couple of years, when he became the face of what would be called glam rock. This promo clip from 1971 is all about showing the audience Bowie's new look.


The album Hunky Dory and its followup The Rise and Fall of Ziggy Stardust and the Spiders From Mars made Bowie a household name in England, with the help of this 1972 performance of "Starman" on Top Of The Pops.

In 1973, at the height of Ziggy's popularity, The Spiders From Mars played a show at London's Hammersmith Odeon. Director D.A. Pennebaker was there to shoot a couple of songs for new promo clips that would accompany Bowie's anticipated U.S. tour, but he was to taken with Bowie that he ordered his cameramen to film the entire show. Unbeknownst to him—and to the rest of the band—Bowie announced that night would be his last show as Ziggy. The resulting movie is now regarded as one of the greatest concert films of all time. Here's "Moonage Daydream" from Ziggy Stardust And The Spiders From Mars: The Motion Picture. In 2014, this song would end up on the Guardians Of The Galaxy soundtrack.


Ditching Ziggy was the first of Bowie's many reinventions of himself. In the mid-70s, he commandeered a Philly soul band and produced a series of huge hits, including "Fame", which he co-wrote with John Lennon. With the next slightly awkward clip, Bowie became one of the first white artists to appear on Soul Train.


In the second half of the 1970s, Bowie's drug habits had gotten completely out of control. He holed up in Berlin with Iggy Pop, who was also trying to kick, and former Roxy Music keyboardist turned producer Brian Eno for a trilogy of experimental art rock albums whose sound people are a still trying to emulate. The middle of the three albums—and Bowie's second album released in 1977—was called "Heroes".


Bowie had starred in the science fiction film The Man Who Fell To Earth a few years before, and as he became more interested in film, his promo clips became more elaborate. In 1980's "Fashion", the dialectic between Bowie and punk rock was on full display.


Bowie's greatest music video was also from the Scary Monsters and Super Creeps era. "Ashes To Ashes" was produced in 1980, When MTV was launched in August, 1981, they were desperate for content, and so this strange, groundbreaking music video was the first glimpse the MTV generation got of David Bowie.


In 1983, Bowie filmed this video for "Let's Dance" in Australia. Buoyed by constant rotation on MTV, it would become the biggest commercial success of his career.


Thanks to YouTube, there's a lot of great videos of Bowie playing live on the web. I'm especially fond of this one from Tokyo, recorded in 1978. In July 1985, Bowie was invited to play Live Aid, a benefit concert for African famine relief that became a huge media event, commanding what was at the time the biggest television audience in history. Bowie was between tours, so with the help of  synth pop legend Thomas Dolby, Bowie put together a pick up band to create a set that would function as a primer to his entire career. Each artist was allotted 17 minutes to play, and Bowie chose "TVC-15", "Modern Love", "Rebel Rebel", and "Heroes"

As the sun set over London's Wembly Stadium, Bowie played to an estimated TV audience of 1 billion. Before Live Aid, "Heroes" was a rather obscure number that Bowie continued to keep in his show just because he liked it. After this performance, it would become his signature song.


Bowie continued to record and tour in various guises until he was felled by a heart attack onstage in 2004. He retired from touring, but made a comeback album The Next Day in 2014. For "The Stars Are Out" video, he enlisted Tilda Swinton as co-star.


Bowie was diagnosed with cancer 18 months ago, but he kept his ailment secret as he recorded one last record, Blackstar, with his producer and friend Tony Visconti. As the end approached, he created one final music video, which was released two days ago. Today, as news of Bowie's death was announced, Visconti confirmed that Blackstar was meant as a "parting gift" to his fans. "His death was not different from his life—a work of Art."