The People Vs. O.J. Simpson

On June 17, 1994, I was waiting tables at Alfred’s on Beale Street. People at the bar had been watching the NBA finals, but while I was ringing in an order, I noticed that all eyes were now glued to a white Bronco followed by a gaggle of police cars. What’s happening, I asked a fellow server?

“He killed his wife, and now the police are after him.”

“He should just kill himself and get it over with,” I said.

My fellow server, whose name is lost to history, looked at me in horror. “How can you say that?”

Apparently he was a big football fan.

“Your wife is dead and now you’re running from the cops with a gun to your head? It’s over, man. You’ve fucked up. Better just to punch your own ticket. Go out with some dignity.”

Innocent people don’t lead half the L.A.P.D. on a low-speed while chase threatening suicide.

“You don’t know that! The cops frame people all the time.”

My fellow server was black, by the way.

“No they don’t. But it doesn’t matter. He’s making them look bad. They’re never going to let him get away,” I said, stringing multiple incorrect statements together. “Besides, you know what Frank Zappa said. ‘Be sure and get it right the first time, because there’s nothing worse than a suicide chump.’“

Somehow, quoting an obscure Frank Zappa song failed to assuage my co-worker’s growing anger. Onscreen, the infamous white Bronco rolled on down the freeway. The whole restaurant—patrons, cooks, bartenders, and busboys—had stopped what they were doing and were staring at the screen.

“If he lives through this,” I said. “It’s going to be the biggest mess you’ve ever seen. And it’s going to go on and on and on.”

At least I was right about something. 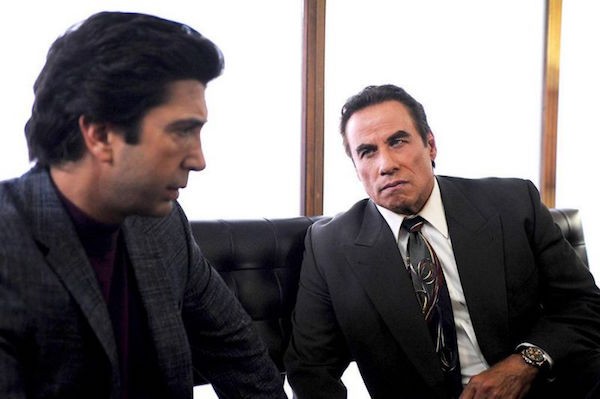 I have to admit, I was reluctant going into The People vs. O.J. Simpson, the new FX series about the murders of Nicole Brown Simpson and Ron Goldman and the circus of a trial that dominated all media in the middle of the Clinton era. I was still, twenty years later, sick of hearing about it or thinking about it. What good could come from revisiting this greatest of American trainwrecks?

Show runners Scott Alexander and Larry Karaszewski, who in the 1990s were writing stuff like Ed Wood and The People Vs. Larry Flynt, are using the biggest murder trial of the last century as a way to peer inside the current American psyche. Their view of the proceedings is summed up by a clip from Tom Brokow heard in the second episode: “A tragedy of Shakespearian proportions playing out on the L.A. Freeway.”

Cuba Gooding, Jr. portrays Simpson as a befuddled Othello, looking around with disbelief as his life crumbles around him. David Schwimmer disappears into the character of Robert Kardashian, O.J.’s friend and attorney whose family’s first taste of reality stardom came when he read O.J.’s (premature) suicide note on live TV. John Travolta is another instantly recognizable face whose performance as high profile defense lawyer Robert Shapiro transcends his personal celebrity. Sarah Paulson plays prosecutor Marsha Clark as a no-nonsense, successful career woman raising two kids in the midst of a messy divorce. Courtney Vance does a perfect Jonnie Cochrane, one character whose portrayal in the show is much more nuanced than his public image at the time suggested.

That the national law firm Cochrane started in his post-OJ stardom was the biggest advertiser for the show’s second episode illustrates just one of the threads that connect the past with the present. All of our current identity politics are at play here, from Ferguson to intersectional feminism, not to mention class. The black men who rallied to O.J.s cause did so because they thought the police couldn’t be trusted to treat black people fairly, and they weren’t wrong. Clarke is portrayed as a woman outraged that a serial domestic abuser was allowed to kill his wife because he was a celebrity, and she wasn’t wrong, either. There are no good guys or bad guys in The People vs. O.J. Simpson, and the protagonist’s guilt or innocence is kind of beside the point. The show is about what happens when human nature meets mass media, a subject that is even more relevant today than it was back then. The 1990s never ended. O.J. is still in the Bronco, and we’re still watching him, forming our own opinions for our own reasons, and looking for excuses to hate each other.