Two new TV series obsess over the details of a certain moment in time, but with vastly different approaches.

As Martin Scorsese’s new series for HBO, Vinyl is focused on 1973, a time which, in retrospect, was the height of the recording industry. Co-produced with Mick Jagger and much of the same production team behind Boardwalk Empire, including writer Terence Winter, Vinyl is a tale of out of control excess on all fronts. Bobby Cannavale, veteran of that show as well as Will And Grace, plays record executive Ritchie Finestra, head of the fictional American Century records. Ritchie is trying to turn his company’s fortunes around by signing Led Zeppelin and selling out the the German company Polygram, and turn his life around by getting clean and moving to Connecticut with his wife Devon (Olivia Wilde). But with cocaine bumping all through his hard partying social circle, it’s clear from the beginning that sobriety was going to be an uphill battle.

With his cronies Zak (Ray Romano) and P.J. (Scott Levitt) at his side, he uses his “golden ear” to find acts to create hits for the label, cringing when he finds out his A&R people had a turned down ABBA as uncommercial. Ritchie’s big breakthrough, which forms the frame of the pilot episode, is finding the New York Dolls and opening up the American glam rock scene. We also flash back to the 1960s, when Ritchie got his start in the business promoting soul singers. Ritchie is another totally unlikeable protagonist in the Scorsese mold of Leonardo DiCaprio’s Jordan Belfort in Wolf of Wall Street. Record executives and Wall Street junk bond traders both live near the bottom of the list of careers that inspire sympathy, and Ritchie’s cavalier attitude towards paying his artists justifies reflexive hatred.

But drug-crazed macho preening is not Vinyl’s biggest problem. It’s characters seem to lack motivation (beyond “he’s drug crazed”) for almost anything they do, flying into fits of rage and falling in lust almost at random. And for a historical story made by people who were there, it plays fast and loose with anachronism. Punk and hip hop arrive three years too early, and the concert scenes, which should be the series strong suit, come off like Rock Band: The TV Show. There’s a long way yet to go in Vinyl’s first season, but Scorsese and company will be hard pressed to get themselves out of the corner that the pilot’s frankly ridiculous ending painted them into. 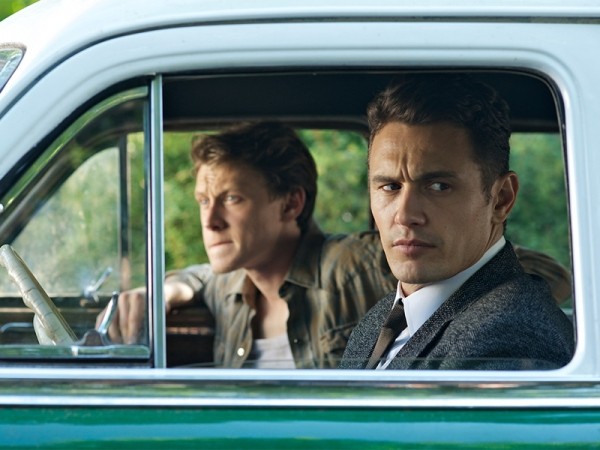 Better with the historical details is Hulu’s 11.22.63. With 50 years of conspiracy theorists picking over the Warren Report and Zapruder film, few historical events have been obsessed over as thoroughly as the assassination of President John F. Kennedy. Stephen King, who wrote the short novel that the series uses as a jumping off point, created the story out of seemingly the same impulse that drove Oliver Stone to make JFK: to wallow in the details and try to emerge with a coherent narrative. But there’s no Stone-esque psychedelia here. Director Kevin MacDonald’s pilot is a workmanlike table setting exercise, spelling out the rules of the time travel scenario that sees New England writing teacher Jake Epping (James Franco) going back to 11:58 AM on October 21, 1960 by merely stepping into the closet in the back of the neighborhood diner run by Al Templeton (Chris Cooper) Jake is convinced by Al to use the portal to try and stop the Kennedy assassination, and thus Vietnam and a host of other bad things from happening. He’s got a carefully researched dossier accumulated from his own time travel adventures, and advice like “If you do something that really fucks with the past, the past fucks with you.”

King has had a spotty record with adaptations of his work, but this 11.22.63 does a good job of capturing him at a moment of storytelling tightness. Franco is an appealing presence, and his experience in genre work, which often requires actors to convey information about plot and emotional states very quickly, shines through. The first of eight planned episodes finds Jake experimenting with all of the information advantages being a time traveller 50 years in the past brings, which, when done intelligently and with a sense of play, is the fun part about time travel stories. The trademark King supernatural creepiness comes into play in the person of the Yellow Card Man (Kevin J. O’Connor) who periodically appears to Franco to point out that he doesn’t belong in the past. With the expositional formalities out of the way, 11.22.63 looks ready to take off.