April 26, 2016
comment
In the deep recesses of Elvis lore, there is one image that stands out as particularly surreal: Elvis in full 70s regalia shaking hands with Richard Nixon in the Oval Office. As the prologue of Elvis and Nixon reminds us, it is by far the most requested image from the National Archive, more popular than the Marines raising the flag on Mount Suribachi or the Apollo 17 “Blue Marble” shot. As the image stares at us from the walls of countless dorm rooms and t shirts, it poses the inscrutable question, “What the hell was going on here?”

Director Liza Johnson tries to answer that question with Elvis and Nixon, with mixed success. One of the best choices from her and a trio of screenwriters (Joey Sagal, Hanna Sagal, and Cary Elews of Princess Bride fame) is beginning with the morning meeting where advisors Egil Keogh (Colin Hanks) and Dwight Chapin (Evan Peters) try to blithely slip in that the President’s nap time will be curtailed in favor of meeting with Mr. Presley. Kevin Spacey, used to playing a president in House Of Cards, absolutely nails Nixon, all hunched shoulders, quivering jowls, and indignation.

When we meet Elvis (Michael Shannon), he’s restless and irritable, trapped in Graceland’s TV room like a panther in a cage. In this telling, it’s the images of the military flailing around in Southeast Asia and the anti-war movement that drive him to seek an audience with the president. No longer a conduit of youthful rebellion, but an early middle aged, wealthy member of the establishment, he’s disturbed by the direction of the country, and thinks the best way he can help is to become an undercover narc. The alternate theory, long entertained by druggies everywhere, that Elvis, buoyed by the finest formulations from Dr. Nick’s pharmacopeia, was pulling Nixon’s leg, is not entertained here. 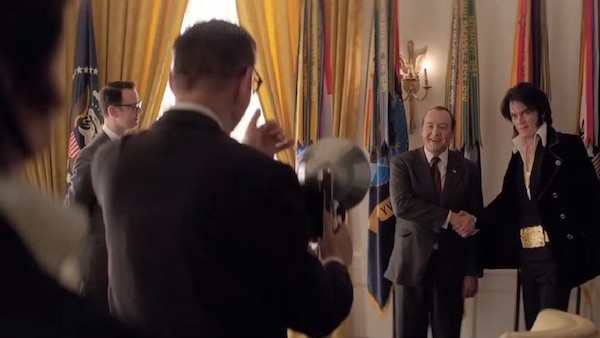 The truth is, the story of this weird picture of two of the most recognizable figures of the twentieth century is pretty thin gruel for a movie. Johnson treats it as a light comedy, which is appropriate, and is at her most interesting when she’s drawing parallels between the isolation and delusions of the President and the King. Both have two henchmen—Elvis’ are Jerry Shilling (Alex Pettyfer) and Sonny West (Johnny Knoxville)—who dictate the exact terms on which anyone can communicate with their boss. The climactic meeting is like watching two silverback gorillas trade dominance displays in the jungle, and it’s pretty fun.

The film’s weak link is Michael Shannon, but it’s not entirely his fault. There have been many attempts to portray Elvis onscreen, with varying degrees of success. For my money, the best was still Kurt Russell in the John Carpenter-directed Elvis TV movie from 1979. Shannon’s not a bad actor, and he gets Elvis’ body language right for the most part. But the voice is all wrong, and the look is just…well, Elvis was one of if not the best looking man of his century and Michael Shannon is not. He suffers especially when put up against Spacey’s uncanny Nixon.

Despite that glaring flaw, Elvis and Nixon is a good view for Memphis audiences and Elvis fans. It’s understatedly, and sometimes surreally, funny, and Johnson has some genuine insights on the isolating nature of fame. But the definitive film document of Elvis remains to be made.