I first discovered this pro tip during the 2006 Winter Olympics in Torino while recovering from hernia surgery. There is no better sport to nod off in a demerol haze to than curling. The experience was so positive (or at least as positive as recovering from major thoracic surgery can be), that when the doctor told me I had a massive hernia on the other side of my body, I scheduled the surgery around the 2014 Sochi games.

In 2012, when web streaming was becoming more practical, I endeavored to watch every event of the London games for a Flyer article. Between then and the Sochi games, I started to understand what experienced sports journalists are talking about when they say every Olympics has a different atmosphere. London had been a little stuffy, but uplifting; Sochi was ominous and vaguely dystopian.

OPENING CEREMONIES
The lead up to Rio had been a string of bad news: The rowers would be churning through sewage, Zika virus was going to be rampant, and the Brazilian government was literally collapsing just as the opening ceremony was looming. I was planning on catching as much of the games as I could, but my schedule was pretty busy, so I was going to keep it casual. Then my wife and I both woke up on Friday morning with a horrifying stomach flu, so my busy weekend turned into Olympic Fever Dream 2016. 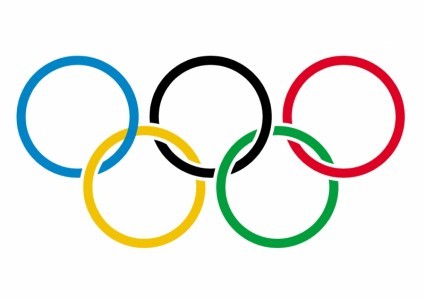 The opening ceremonies had three directors, including Fernando Meirelles, the Brazilian filmmaker who created the harrowing 2002 Rio crime epic City Of God. Working with a tiny fraction of the budgets Beijing and London had, they chose to lean heavily on projection mapping. You can see a much smaller scale example of projection mapping at the Crosstown Arts gallery this weekend with Fish, which, like much of the opening ceremony, uses a system of overlapping projectors throwing digitally manipulated images to create its illusions.

Maybe it was a result of my 100-degree fever, but I thought the program, which traced the entire history of human habitation in the Amazon basin and ended with a call for action against climate change, was superior to both better-funded recent examples. Rio’s secret weapon is Brazil’s incredible musical culture, and the beats didn’t stop with the end of the opening ceremony. Every event came with a live soundtrack of local musicians, and as far as I’m concerned Brazil has earned the gold medal in dancing. Despite the encroaching chaos of the outside world, the samba-infected mood of these games is loose and jubilant.

CYCLING THROUGH THE FUTURE

The story of Olympics coverage in the 21st century has been one of rapidly advancing digital video technology. 2008 was year HD came to Olympics, and the unwritten story this year has been the advent of 4K video. For the vast majority of viewers, its still being served in 1080 HD streams, but TV has never looked better than this. The colors are deep and varied, the blacks crunchy. Details in the foreground and background are constantly popping out you. What was an uncanny trick shot four years ago—such as the uncanny double images of underwater swimmers caused by reflections from the surface—now occurs in almost every swim heat.

The technical advances were immediately evident on Saturday at the Men’s 150 KM Bicycle Road Race. Cycling has always been a difficult sport to cover because of the speeds and distances involved, and only in recent years has it become practical to transmit digital HD video from a moving motorcycle. The combination of point-of-view images with drone and helicopter footage made for incredibly exciting viewing experience, and NBC used it very effectively to tell the story of a truly epic athletic contest. The race took six hours, and it was closely contested all the entire time. The course wound through the mountains surrounding Rio, and commentators were calling it the most difficult in Olympic history. The race was a brutal war of attrition, with riders bouncing on century-old cobblestones and dodging the shrapnel of their crashed competitors. Australian Richie Porto pulled himself off the pavement and tried to continue racing with a broken collarbone. The final few kilometers was a plunge from Fort Copacabana so steep and twisty the three leaders pulled away from the chase motorcycles, tightening the suspense for a breathless moment until the camera rounded a corner to reveal a pair of racers sprawled across the road. The survivor of the pile up was Rafael Majka, a two-time Tour de France King Of The Mountain winner who held a big lead when the course straightened out for the final sprint, only to settle for bronze after a pack of riders ran him down like wolves taking down a buffalo.

The same narrative played out the next day with the women’s road race, which was even more intense. Dutch cyclist Annemie van Vleuten was cruising down the mountain toward the gold when her tire slipped on drizzle slicked pavement and she crashed headfirst into a concrete curb on live television. Despite a severe concussion and three cracked vertebrae, she tweeted from the intensive care unit that she was bummed she crashed just when she was having the race of her life.

So here we are in 2016. Everyone’s got an Apple TV or Roku or Chromecast hooked up to their flatscreen. We’ve got the whole streaming thing cracked, right? This year we’ll be able to see any Olympic even we want live over the web, right?

The NBC streaming experience, both on the web site and through the Apple TV app, has been a total mess. The streams have been coming through clear, but you’re not always sure what you’re going to get when you click on an icon, because the labeling and times have been obscure and inaccurate. Early in the week, the automatic ad serving on the stream was so bad it ruined the Women’s Epee competition by covering most of the action with Samsung commercials.

As the games progressed, the ad serving situation seemed to get better. Many of the streamed events don’t have any commentary. This can be a problem for something like judo, where the line between winning and losing is unclear to the casual viewer. But with something like archery, where the objective is clear, the lack of narration really brought into focus how much the drama mongering, narrative based coverage is totally false.

Archery matches are great single-serving sports experiences. Sets go quickly, so there’s lots of scoring, lead changes, and tension. The arcs of the arrows ending with a satisfying “thunk” at the target makes for great television. Archers have a much wider variety of body types than, say, gymnasts. For every willowy Eastern European demigoddess looking like they’ve just come from the Wild Hunt, there’s a sturdy, kind-eyed math teacher type. The sport is also a great example of how quickly the Olympics can transform you into an armchair expert. I found myself getting blasé about 8s and 9s, even though any of these kind-eyed math teacher types could easily kill me with a single arrow from a quarter mile away.

Modern sports coverage and its obsession with psychological narratives goes back to Roone Arledge’s tenure at ABC sports in the 70s. It can be useful and truthful, as was the case with American Judo gold medalist Kayla Harrison. There are a lot of different ways to lose a judo match that fall short of losing consciousness, and it helps to have an expert explain the action. And Harrison’s story is genuinely compelling: She was sexually abused by her first coach, but recovered to become and activist and two-time gold medalist. She’s the former sparring partner of UFC superstar Rhonda Rousey, and she’s facing pressure to follow her friend into the more violent, lucrative sport, but that would mean giving up her calling to be a firefighter. It's a genuine moral dilemma!

Elsewhere, though, NBC’s attempts to drum up drama have been intrusive and unnecessary, and they seem unable to adapt when their preferred narrative is proven false. The US Women’s Gymnastic Team may be the greatest assemblage of athletes in their sport’s history, and they show every outward sign of having a healthy, supportive team relationship. Commentators repeatedly attempted to tease out jealousies and interpersonal drama, but the team’s performance was so dominant and Olympic in spirit that the women’s sheer virtue became the dominant story.

The pool was the arena for the games’ greatest heroics so far. Hungarian swimmer Katinka Hosszu won three gold medals in the grueling individual medley and backstroke events, breaking both Olympic and world records in the process. American Katie Ledecky left everyone in her wake winning three golds and a silver in dominant fashion. Simone Manuel created one of the games’ most transcendent images when she became the first African American woman to win a gold medal in a swimming event.

Then there’s Michael Phelps. At age 31—ancient by Olympic swimmer standards—his performance in the pool made a strong case that Phelps is the greatest Olympian of all time. Not only has he won a completely unprecedented 22 gold medals in the course of his storied career, but his win in the 200 Meter Individual Medly race put his lifetime individual medal count at 13. The former record for total lifetime individual gold medals was 12, and it was held by a man known only as Leonidas of Rhodes, a runner who won his ultimate medal at Olympia in 152 B.C.E. 2,168 years ago. There is much that needs changing in the modern Olympics, but Rio has so far lived up to the Olympian ideal. It's a celebration of humanity’s greatness, spanning the long millennia, and now served to your Roku in brilliant 4K video.