September 24, 2016
comment
Here’s my big takeaway from Eight Days A Week: The Beatles were a great band. 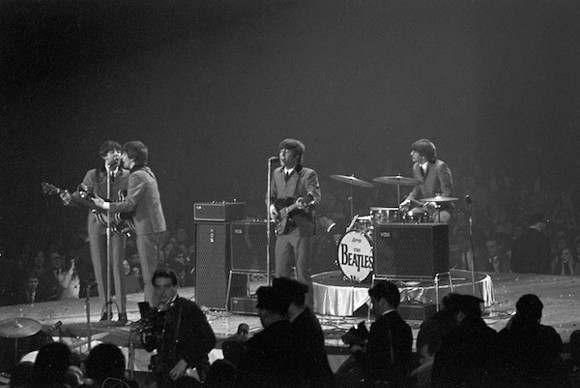 I mean, yeah, big whoop, right? The Beatles were a great band. Stop the presses. But I think The Beatles have been swallowed by their own legend. In the hip hop era, extolling the virtues of The Beatles will get the kids' eyes rolling. They are the quintessential Baby Boomer phenomenon, and this documentary is directed by another Baby Boomer phenomenon: Ron Howard, a guy whose showbiz career started in 1959. Lately, the Apollo 13 director has devoted his time to low-impact adaptations of DaVinci Code books, and this movie is another softball. Nobody ever went broke selling The Beatles to Baby Boomers.

There are some parts of this production that seem phoned-in. The sound design, which you would expect to be perfect in a project like this, is occasionally haphazard. It’s not exactly briskly paced. There are a few colorized segments that look head-scratchingly tacky. As an obsessive fan of the band and of music in general, I didn’t really learn anything significant about The Beatles from this film.

But wow, they were a great band. And they’re still great. A couple of years ago, my wife and I paid a bunch of money to see Paul McCartney at the FedEx Forum. Our expectations were tempered by the fact that Sir Paul was 70 years old, but we figured if we just got to watch Paul Freakin’ McCartney’s muscle memory fire for an hour or so, it would be worth it. The man is living history. But the show wasn’t like that at all. Paul killed it. He played for more than two hours, alternating between bass, guitar, piano, and ukulele, never leaving the stage. The only clue that he exerted himself at all was that he took his jacket off after a few tunes. If nothing else, the man is a good argument for vegetarianism.

Before the show, we were talking about how it would be preferable to see Sir Paul in a small room instead of the Forum. But during the show, he casually dropped an anecdote about his last tour where he played to a crowd of 300,000 in Ukraine, and we realized that for him, the Forum was a small room.

Eight Days A Week makes it clear that Paul and the lads pretty much invented the modern arena concert—or rather, it was invented because of them. Thanks to a ten-camera film setup, the first mega-show The Beatles played, Shea Stadium in New York, provides the documentary’s most compelling footage. They perform out on the baseball diamond, with the stage about where second base would be. The isolation from the 50,000-strong throng of their rabid fans provides a prefab visual metaphor for what it was like to be one of the Fab Four in 1965. There is no huge sound system visible, like there would be at a modern arena concert, because they simply hadn’t been invented yet. A good system for getting amplified music out to a crowd that big wouldn’t be assembled for years, when The Grateful Dead’s sound crew finally cracked the problem. At Shea, The Beatles played through the stadium’s built-in PA, a primitive system only designed for at-bat announcements and the organ player. Even more unfathomable from a modern musician’s perspective, they played without monitors. They couldn’t hear themselves. And yet, they played in tune, in rhythm, and sang harmonies more complex than just about anything you hear on the radio today. The show, which is appended in full to the version of Eight Days A Week now showing at Studio on the Square, is a dazzling display of virtuosity and stage smarts under difficult conditions that had no real precedent.
Like I said, The Beatles were a great band—not just a collection of genius songwriters and visionary artists, a great band. When Howard trots out 1963 footage of John leading the band through an Earth-shaking rendition of “Twist and Shout”, I thought, the young Beatles would kill at Gonerfest, the annual garage punk festival occurring in Memphis next weekend. Eight Days A Week confirms that every young group of miscreants who have picked up guitars and drums in the last fifty years have been playing in The Beatles sandbox.