November 23, 2016
comment
At first Christmas movies were all smiles. Lots of snowy landscapes, reindeer, and brightly wrapped presents for good little boys and girls, that’s all you needed to make a holiday movie and rake in those White Christmas bucks. Then after about 50 years of that, the Christmas backlash movie began to appear. Maybe it’s the twisted legacy of A Christmas Story, which is a fabulously positive holiday movie, but includes acknowledgements that the Yuletide can be a stressful time for all involved. Another early example of a holiday backlash movie is Planes, Trains, and Automobiles, which is probably the best Thanksgiving themed film ever made.

Terry Zwigoff’s 2004 Bad Santa is a standout holiday backlash movie because it dared to go full nilhilist. It revolved around Billy Bob Thornton’s scarily committed performance as Willie Stoke, a criminal deadbeat with a knack for safecracking and a taste for cheap booze and large women whose seasonal employment involves dressing up as Santa Claus. Nowadays, there are more holiday backlash movies (The Night Before and Office Christmas Party, for example) than actual holiday movies to backlash against, and if Bad Santa 2 is any indication, it might be time for a market correction.

As the English say, Bad Santa 2 does what it says on the tin. It’s pretty much just a straight remake of the original movie, a “let’s get the band back together” (except Zwigoff is out) done 10 years too late because nobody in Hollywood funds original ideas any more. That being said, it does, in fact, do what it says on the tin. Are you feeling grumpy about this impending season of darkness? Go watch Billy Bob Thornton and Kathy Bates—two extremely talented actors who don’t get to work as much as they should—lock horns as the worst mother and son pair since Caligula and Agrippina. Also back is Tony Cox as the treacherous elf Marcus, and Brett Kelly as Thurman Merman, the clueless little kid now grown up to a clueless young adult. 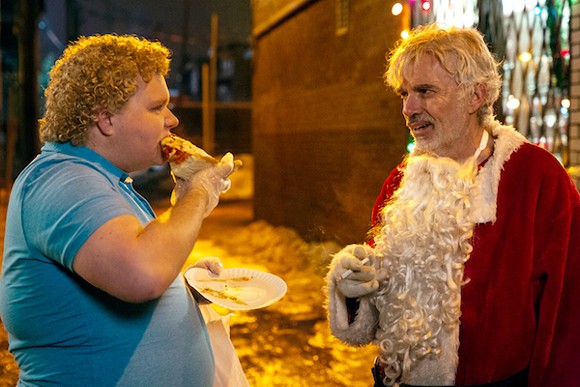 It may be difficult to impossible to shock us jaded filmgoers in this dark timeline, but Bad Santa 2’s writers Johnny Rosenthal and Shauna Cross gives it the old college try. About the time the novelty of seeing Santa Claus cuss at a midget starts wearing off, the film transitions into a low-impact heist comedy, and director Mark Waters executes both halves of the movie pretty well.

I always try to judge a movie first on what the filmmakers were apparently trying to achieve. On that level, the makers of Bad Santa 2 have clearly succeeded. But on the other hand, the thing they have succeeded at is making another Bad Santa movie. Maybe try to set the bar a bit higher next time.