Rogue One: A Star Wars Story

December 20, 2016
comment
“It is a period of civil war. Rebel spaceships, striking from a hidden base have won their first victory against the evil Galactic Empire. During the battle, Rebel spies managed to steal secret plans to the Empire’s ultimate weapon, the DEATH STAR, an armored space station with enough power to destroy an entire planet.”

Those are the opening words of the famous opening crawl from the original 1977 Star Wars. The entire plot of Rogue One: A Star Wars Story is contained in those three sentences. A lot has changed in the almost four decades (!) since George Lucas’ space opera debuted, transforming filmmaking in its own image. In the early days, part of the mystique of Star Wars was the feeling that the galaxy was a huge, real, and lived-in place. The spaceships were not gleaming, shiny, and white, but grungy, dirty, and falling apart. The crawl, and subsequent hints in the dialog, hinted at an extensive and complex backstory. When Lucas revisited his universe, beginning in 1999, he focused on the big questions: How did the Old Republic become the Galactic Empire? How did Jedi Knight Obi Wan Kenobi’s apprentice Aanakin Skywalker become Darth Vader? True, there was much fertile ground for imagination there, but the results speak for themselves. The prequels consistently looked amazing, but the stories, written by Lucas himself, were bloated, confusing messes. 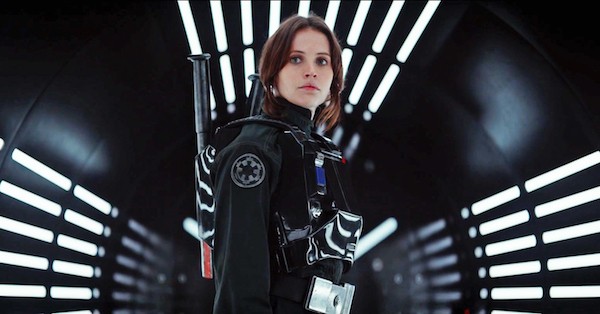 Lucas originally wanted to create a playground universe for other directors to work in. With the prequels, he abandoned that vision and tried to do it all himself. Now that Lucas is retired, and Lucasfilm sold to Disney, Executive Producer Kathleen Kennedy is trying to follow Lucas’ original vision. Last year, The Force Awakens continued the story of Luke, Leia, and Han with Lucas/Spielberg acolyte J.J. Abrams at the helm, proving that there was plenty of life left in the old formula.

Of course, the ultimate reason why Disney bought Lucasfilm for $4 billion is to replicate the success of the Marvel franchise, which pumps out a couple of loosely connected movies a year based on the enormous stable of comic book superheroes Stan Lee and company built up over the years. In Star Wars, Disney saw another ATM to make annual withdrawals from moviegoers pockets, and that means the once-every-three-years schedule Lucas operated on had to be accelerated. If The Force Awakens was the Star Wars equivalent of The Avengers, then Rogue One is Doctor Strange—except it’s much better than Doctor Strange.

In all of the almost seven hours of the prequels, Lucas never touched on the epic story he (with the help of Brian De Palma) wrote into the 1977 opening crawl. John Knoll, who worked as the special effects supervisor for the prequels, pointed that out a decade ago, but Lucas, stung by the lukewarm reception to his prequel trilogy, didn’t want to listen. Fortunately, Kennedy did. Rogue One is a prequel done right, and it succeeds by focusing on the details. For the first time, there is no opening crawl text, because it’s not an installment of the Skywalker family saga, it’s about little people getting caught up in the sweep of war. 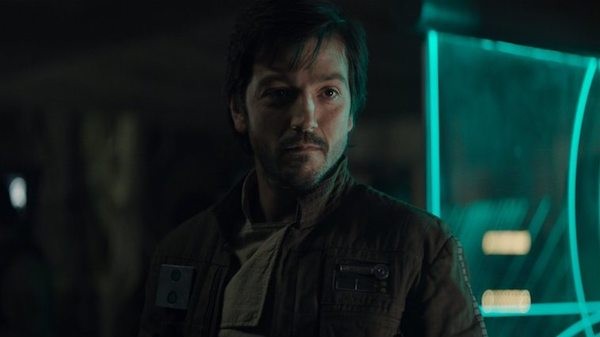 And “war” is the operative word. The Star Wars formula can be boiled down to three elements: Kurosawa samurai film, Flash Gordon, and World War II movies. All three elements are present, but Rogue One shifts the balance toward the third—call it Saving Private Leia. Instead of an opening crawl, director Gareth Edwards kicks off with a flashback. Galen Erso (Mads Mikkelsen), is a scientist who has fled the grip of the Emperor, hiding on a backwater planet with his daughter Jyn (Felicity Jones). But Orsen Krennic (Ben Mendelsohn), director of weapons research for the Imperial Navy, is not one to take no for an answer. He and his squad of black-clad Death Troopers kidnap Galen, but Jyn manages to get away with the help of Saw Gerra (Forrest Whittaker), a revolutionary waging a one-man war against the Empire separate from the Alliance to Restore The Republic.

The flashback is revealed to be the dream of Jyn while she’s stewing in an Imperial prison years later. The Rebel Alliance has gotten word that Imperial defector Bodhi Rook (Riz Ahmed) has a message from Galen warning of a planet killing ultimate weapon. Bodhi is in the custody of Saw’s rogue cell, so Rebel intelligence officer Cassian Andor (Diego Luna) is dispatched to spring Jyn from Imperial custody, make contact with Saw and get to the bottom of the situation. Along the way, Jyn and Andor collect a Seven Samurai-style ragtag team of misfits and hard cases for the desperate raid to steal the Death Star blueprints that Luke Skywalker will use to save the galaxy.

At times, Rogue One doesn’t feel like a Star Wars movie. For one thing, the films have always soft-pedaled the violence. In The Phantom Menace, war atrocities are alluded to but never seen. In A New Hope, the planetary genocide of Alderaan is seen from orbit, its doomed inhabitants are abstract. Rogue One foregrounds Imperial brutality, and the dire measures the rebels have to take to combat them. The pacing is different, too. J. J. Abrams has spent much of his career trying to recreate the rhythms editor Marcia Lucas developed in 1977. The first hour of Rogue One is paced more like Edwards' 2010’s shoestring indie Monsters. But if it stayed at that pace, it would have ended up like his turgid 2014 Godzilla reboot. Instead, it carefully accelerates into one of the most thrilling climaxes in recent memory. The blowout third act is a staple of Marvel movies; they have become almost interchangeable blurs of brightly costumed heroes beating up on dull villains. Rogue One’s climax features not only thrilling heroics on the ground, but also the best space battle since Return Of The Jedi. The visuals are unlike anything Star Wars has ever attempted before, and they represent the pinnacle of the photorealistic style Industrial Light & Magic has been pursuing since 1977.

But none of that would matter without characters you can love and root for. Diego Luna’s performance makes Captain Andor one of the best characters in the Star Wars canon. Jones’ performance put me in mind of Furiosa from Mad Max: Fury Road. Other standouts are Donnie Yen as a Jedi Temple guardian inspired by Zatoichi the Blind Swordsman, Alan Tudyk as the wisecracking droid K-2SO, and Whitaker as the bitter warrior Saw. Among the film’s many outstanding technical achievements is the uncanny digital reconstruction of Grand Moff Tarkin, even though the original actor Peter Cushing passed away in 1994. There are more digitally reconstructed cameos, but I won’t spoil them here.

Rogue One has the same dark tone as The Empire Strikes Back, which should be expected from a story that takes place in what Obi Wan Kenobi called The Dark Times. Its swashbuckling is more desperate, and its plot twists more unpredictable, even as it moves towards the inevitable conclusion. It may not be a traditional Star Wars movie, but it is the Star Wars movie we need as we stare into our own version of the Dark Times—a story of courage in the face of seemingly overwhelming evil.