July 03, 2017
1 comment
Of all the movies in theaters right now, Baby Driver kicks the most ass. Edgar Wright says he first conceived his film in 1994, and it shows. That was the year Quinten Tarantino’s Pulp Fiction premiered, plunging the indie film world into years of hep cat criminals snarling stylized dialog at each other. Tarantino’s use of pop music, drawn freely across genres from the past and present, was something new. Everyone wanted to try it, but not everyone had Tarantino’s ear.

1994 is also the year the Jon Spencer Blues Explosion recorded Orange. The former Pussy Galore frontman had made a pilgrimage to Memphis the year before to discover Stax soul and record with lo fi legend Doug Easley. Orange opens with “Bellbottoms”, a 5-minute epic that shifts gears from lush Issac Hayes strings to Oblivians-inspired, runaway train punk. Wright opens Baby Driver with a bank-heist/car-chase scene set to “Bellbottoms” that he’s obviously been planning in his head since the first Clinton administration. With Baby (Ansel Elgort) lip synching the words as he tears balletically through Atlanta’s nightmarish streetscape, the sequence plays as a perverse marriage between La La Land and Mad Max: Fury Road.

Atlanta is just as much of a character for Wright as Los Angeles was to Damien Chazelle. Baby (Ansel Elgort) is a creature of the streets, a supernaturally talented car thief whose knowledge of the city’s endless array of onramps to nowhere is surpassed only by his knowledge of banging tunes. His favorite leather jackets, with black body and white sleeves, make him look like Han Solo from a distance.

A while back, Baby tried to boost a car belonging to Doc (Kevin Spacey), a gangster in the mold of Harvey Keitel’s The Wolf. Rather than killing him, Doc decides to give him a job as a getaway driver, enabling a string of daring daylight bank robberies that, naturally, end in spectacular high-speed chases. The taciturn Baby is already having second thoughts about the collateral damage left behind by his partners in crime when he meets Debora (Lily James), a waitress at the local diner who instantly captures his heart. They make plans to run off together, but Doc keeps pushing him to do job after job, each one more dangerous and audacious than the rest. 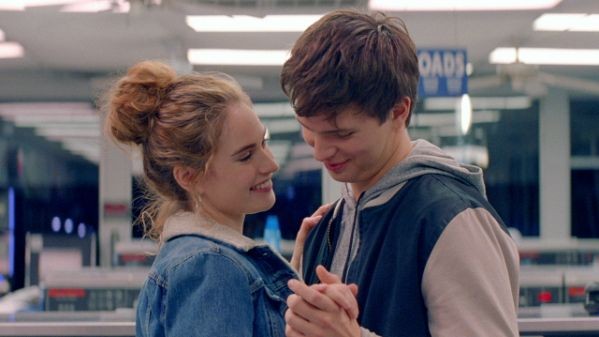 The plot’s pretty standard grindhouse crime fare, but it’s the execution that matters to Wright. Baby Driver sometimes feels more like a series of intertwining music videos than a feature film, with its 30-song soundtrack bleeding into the film’s reality at unexpected times. The editing by Scott Pilgrim cutter Paul Machliss is as immaculate as it is propulsive.

Wright’s having a blast, and his fun infects the cast. Jon Hamm grows a beard and lays it on thick as a heavy named Buddy, who is hopelessly in love with the assault-rifle-toting sexpot Elza Gonzalez. Jamie Foxx brings unpredictable menace to Bats, a bank robber with a major impulse control problem.

But the music is the real star of the show. In yet another homage to Hustle & Flow, when Baby isn’t running from the law, he makes beats on his eclectic analog equipment. Carla Thomas, Sam and Dave, Martha and the Vandellas, The Beach Boys and The Commodores all get loving treatment. The Damned classic “Neat Neat Neat” becomes the car chase anthem it was always meant to be, while both T. Rex’s “Debora” and Beck’s “Debra” get dedicated to the leading lady.

Baby Driver aspires to be cinema, a film experience that brings fans together. It should definitely been seen in the theater, if for no other reason than to fully experience the mesmerizing sound design. It’s a terrible shame that, with a dozen channels of flawless digital sound reproduction at their disposal, the vast majority of filmmakers are content to just make explosions louder, or do that awful “whamp” noise from Inception again. Wright aims for a much higher bar, and clears it with ease.