September 22, 2017
comment
As we were trailing out of the matinee of mother! at Studio on the Square, a woman in front of me asked of no in particular “What was that?”

A Malco employee, waiting to clean up the theater, said, “It’s the Bible!” 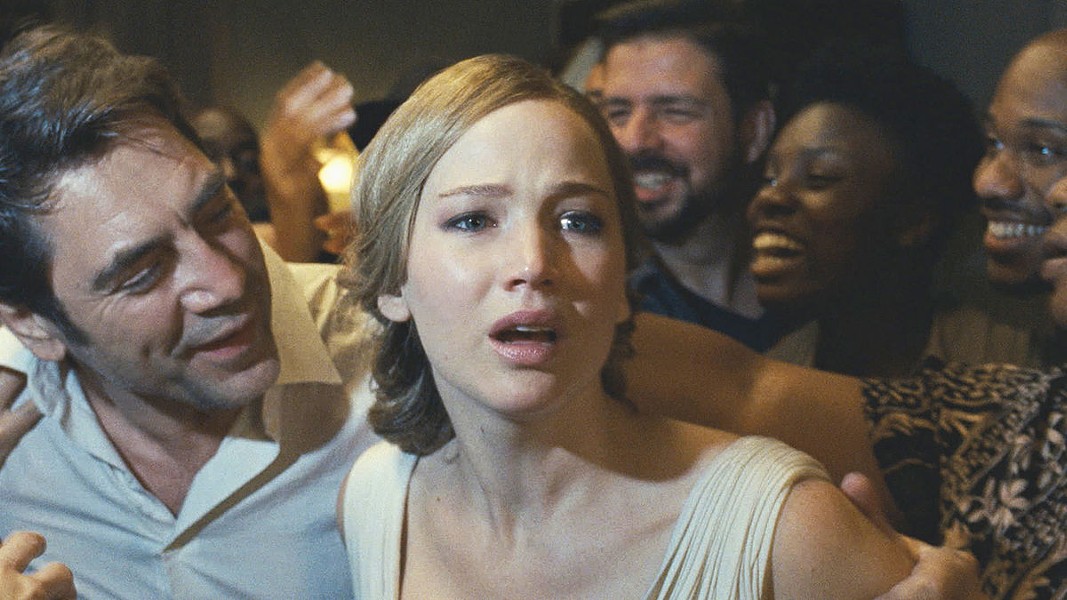 The weary few filmgoers in the theater groaned in unison. Mr. Malco was right, of course. That reading explained so much of the baffling imagery. What it didn’t explain was, why?

I’m a fan of everyone involved in mother! Darren Aronofsky’s Pi is one of the best indie films of the 1990s. I loved The Wrestler and particularly Black Swan, the psychedelic ballet body horror movie that got him five Academy Award nominations and Natalie Portman a Best Actress Oscar. Jennifer Lawrence is actually a great actress in addition to being one of the highest paid people Hollywood. Javier Bardem is a always a welcome presence, able to be either warm and human or terrifyingly cold. Michelle Pfeiffer is a legend. So is Ed Harris. Domhall Gleeson still has fun Lord Of The Rings vibes attached, and Kristin Wiig is frequently the best thing in all the films she’s in. So how could mother! have happened, and why?

After an arresting initial image of Lawrence in flames, she wakes up in a half-finished house in the middle of nowhere. The home burned down a while back, and she is rebuilding it while Bardem, a writer, tries to finish his new manuscript. Then Ed Harris, a chain smoking doctor with a hacking cough, shows up. He’s a big fan, and Bardem asks him to stay the night. Harris and Bardem get drunk and trash the place, while Lawrence tries to clean up. The next morning, Pfeiffer arrives. She’s Harris’ wife, and the two of them team up to be houseguests from hell. Lawrence wants to kick them out, but Harris is dying, and Bardem says he doesn’t have the heart. While they’re making a nuisance of themselves, their two squabbling sons show up, played by Domhall Gleeson and his actual brother Brian, and one quickly kills the other.

You can see in this scenario that Bardem is God (later in the film, he is asked his true identity, and he replies “I am I”, the literal translation of “Yahweh”), Harris is Adam, Pheiffer is Eve, and the Brothers Gleeson are Cain and Abel. But where does that leave Lawrence? Since she spends most of the film having anxiety attacks in extreme close up, she’s obviously meant to be the lead character, and yet she falls outside the symbolic system which seems to be the film’s reason for being—that is, unless you’re willing to go deep into the history of ancient Canaanite religions.

Back when Yahweh was the combination storm and military god of a tribe that didn’t yet call themselves Israel, he lived in a tent on a magic mountain and had a consort named Asherah, the goddess of motherhood and fertility. After the Babylonian diaspora, when the Yahweh cult made the Jews monotheistic, Asherah’s temples and altars were destroyed, and the goddess became a theological footnote. Considering all of the crap Lawrence puts up with in this picture, the neglected, semi-ex-wife of Yahweh seems like a good fit for her. But that doesn’t explain the soon-to-be-infamous sequence where Bardem and Lawrence have a baby, who is then torn apart and eaten by a crowd of Bardem’s fans. If the kid is obviously Jesus, doesn’t that make Lawrence Mary?

Aranofsky has said in interviews that Lawrence represents Mother Earth, and the Biblical structure is a hook on which to hang an allegory of man’s environmental destruction. I’m not big on authorial intent, which can be good to know but is usually beside the point, but somehow knowing that’s what the director was going for makes mother! even worse. It would be better if the artist had some kind of dense personal meaning he abstracted into symbols and I just didn’t get it. This, I got, and it’s bad. It’s bad because it’s both too obvious yet not obvious enough. It’s bad because it’s a 15-minute short film’s worth of ideas expanded into two hours. And it’s especially bad because the experience of watching mother! is so unpleasant. Aranofsky is really, really good at invoking anxiety, and this time around, he pulls out all stops. He’s basically revving up the audience’s endocrine system for 121 minutes for no reason. There’s no payoff, no catharsis, no changed understanding of the world. Just “It’s the Bible” and “Pollution is bad.”

There are occasional flashes of brilliance in mother! Lawrence has never looked as beautiful as she does under the lens of Aranofsky collaborator Matthew Libatique, and there’s a delicious shot where Wiig executes a bunch of counter-revolutionary refugees from Bardem’s book signing (don’t ask) before pivoting and glad handing Lawrence. But mother!’s sparse pleasures aren’t worth enduring its brain pounding absurdities. I’m a bigger than average fan of surrealism, but this is just a half-baked mess. As my wife asked after being confronted by Mr. Malco’s biblical hypothesis, “You’ve read the Bible, Is there a bloody floor vagina in it?”

No. No there is not.