November 03, 2017
comment
Biopics, with their vaguely cancerous-sounding name, are the scourge of the entertainment industry. They make the fussy details of life programmatic. Characters must always state their intentions in declarative sentences. Orchestral soundtracks must always manhandle viewers into scheduled emotions. What is it about actual lives, especially British period ones, that are so resistant to movies? 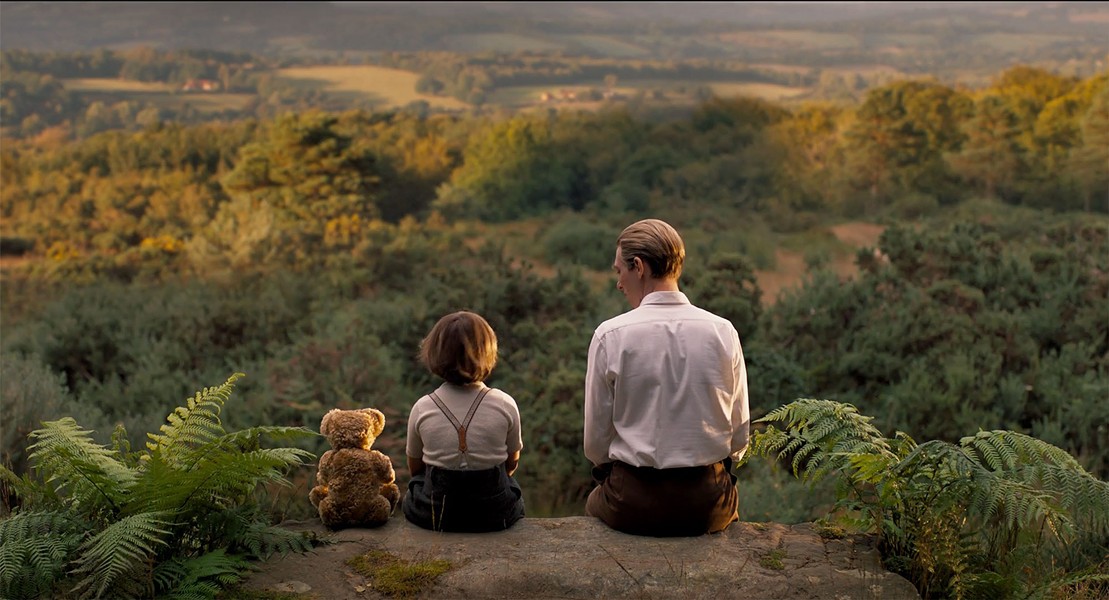 One reason is that they have predetermined ends before a screenwriter ever sits down. Another is that you've already experienced the most interesting aspect: the acts or accomplishments the story buttresses. In the case of Goodbye Christopher Robin, that accomplishment is beloved children's series Winnie the Pooh, about a bear and his friends who live in the woods. Goodbye is about the emotional neglect author A.A. Milne visited upon his son while making him the star of his books. It hits the note of parental abandonment well, but the staid tones of early twentieth-century Britain flood it and preserve the thing in amber.

There are points for trying, though. Some attempts to enliven—a croquet ball turning into a hand grenade in a pre-credits sequence, or Christopher Robin A-Ha video-ing his way through illustrations from the books—fall flat. Others work, from smart editing bluntly cutting off the ends of cookie cutter scenes, or the emphasis on the less-than-ideal qualities of A.A. (Domhnall Gleeson) and wife Daphne (Margot Robbie). They pretty much give the raising of their child over to his nanny (Kelly MacDonald). Child actor Will Tilston as Christopher Robin is good at beaming a wide smile—his constant reaction to Ashdown Forest/Hundred Acre Wood— but is a little more blank with other emotions. Gleeson is good with the arch cynicism of a World War I vet, but less solid at portraying gruffness and shellshock.

Milne moves the family to the English countryside to write a book arguing against the notion of war. His PTSD comes in the form of fright at champagne corks and balloon pops. He heals and bonds with his son while making up stories about his stuffed animals. Moments dedicated to naming them —Tigger, Piglet, Eeyore— play like the Star Wars prequels ("Anakin Skywalker, meet Obi Wan Kenobi") in their reliance on previous work for impact. But the movie gets childhood play right, like when Christopher Robin later accuses Milne of only playing with him in order to write a book.

Some lines have the feeling of compression of life for drama, like "Childhood was wonderful, it's growing up that was hard," or "I've had enough of making people laugh, I want to make them see." Director Simon Curtis’ earlier My Week With Marilyn had a good Michelle Williams performance as Marilyn Monroe, but neutered the other half of her love affair, making him an innocent when the source material promised a more interesting cad. In Goodbye the only emotions that worked for me had to do with abandonment. Those that had to do with war or whimsy seemed puffed up to sell their importance. Next to the wars that bookend the movie, the annoyance of fame to Christopher Robin, his motivation for joining the army, seems minor. 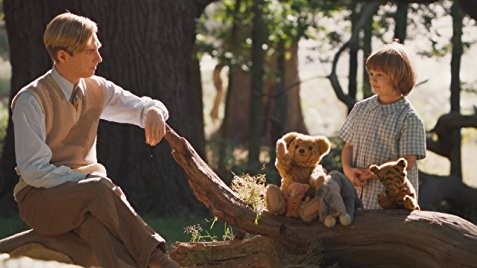 Films like My Boy Jack, about Rudyard Kipling and his son, and Ken Burns' documentary The Roosevelts, which dealt with Theodore and his son Quentin, covered similar material with a super-masculine historical father enthusiastically sending his boy off to World War I. Here, the Milnes prophesize they can't keep their child out of war before he’s born, and feel doomed as World War II gets closer. A.A. has no machismo like Kipling or Roosevelt to hurl his son into violence; his flaw is his coldness (or, living in a world where there will be more fighting).

Cinematically, World War I is World War II's shadow. Instead of a worthwhile fight against evil it's a meaningless slaughterhouse. That's actually more modern, and appropriate, as film portrayals of organized group murder go. WWII is the exception that proves the rule, and undergirds our military-industrial-entertainment complex. We see it much more often on our screens, though Inglourious Basterds' post-modern take might mark the end of its reign.

The Winnie the Pooh books and television show seemed to encourage emulation of its gentle main character. It's exciting for Goodbye to resituate that call for gentleness between two wars, as the message of a veteran father to his affection-starved son. But reaching for such honey it gets stuck.