November 10, 2017
comment
After a pause caused by the festival itself, here's the next-to-last installment of Indie Memphis' Greatest Hits, where we count down the winners of the Best of Indie Memphis poll. You can get caught up with part one, part two, and part three. 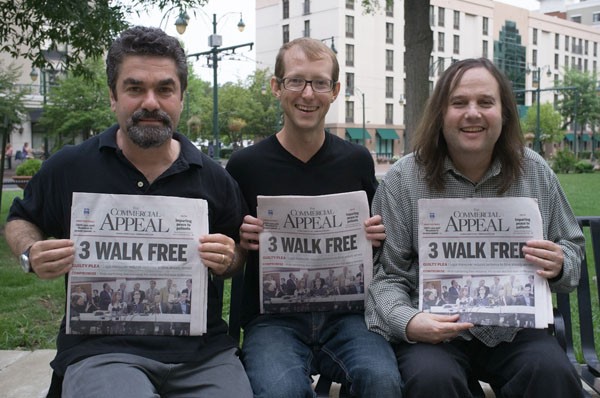 The West Memphis Three case is one of the most notorious miscarriages of justice in American history. But if it weren't for a couple of struggling directors pitching a true crime documentary to HBO in the early 1990s, Damian Echols, Jason Baldwin, and Jessie Misskelly would still be in jail for a crime they didn't commit. Bruce Sinofsky and Joe Berlinger's came to the Mid South asking, how could three normal teenagers commit such a gruesome crime? But once they got here, they quickly became convinced that the accused were innocent. Paradise Lost: The Child Murders At Robin Hood Hills would prove to be one of the most consequential documentaries ever, and has influenced a generation of works from Serial to True Detective. Berlinger and Sinofsky followed the case for 18 years, and when new DNA evidence came to light, their cameras were there. In 2011, Paradise Lost 3: Purgatory had its second public screening at Indie Memphis weeks after the West Memphis Three walked free. When Jason Baldwin walked onstage unannounced at the Q&A, it was one of the most electric moments in Indie Memphis history. Later that year, the film was nominated for Best Documentary at the Academy Awards.

The same film beat Paradise Lost 3 at both  the Oscars and Indie Memphis' documentary category that year. Undefeated was directed by Daniel Lindsey and T.J. Martin told the story of the Manassas High School Tigers and their coach Bill Courtney as they attempt to turn around their school's historic losing streak on the football field. Today, Undefeated remains a sports movie staple.

The Memphis punk scene started in January 1978, when the Sex Pistols played at the Taliesyn Ballroom—now the site of the Taco Bell on Union Avenue. A bunch of kids who thought they were the only ones listening to punk rock in Memphis found each other that night. Months later, some of them descended on The Well, a down-on-its-luck country western bar a few blocks from the Taliesyn, on Madison Avenue. In 1981, The Well became Antenna, the most radical music venue in the south. For the next fourteen years, Antenna was a haven for freaks and the home of new music in Memphis. National bands like R.E.M., Black Flag, the Red Hot Chili Peppers, and Green Day played at Antenna years before they were filling arenas. It was ground zero for Memphis' alternative creative explosion that flew under the national radar while spawning groups like Panther Burns, Pezz, The Oblivians, The Grifters, and Jay Reatard—just to name a few.

When I was approached by Ross Johnson and John Floyd about making a documentary about Antenna and the music scene that thrived there, I knew it was something the Memphis community sorely needed. But I balked at the opportunity. I worried about the availability of archival footage. Antenna existed before the age when everyone had a cameraphone in their pockets. Would there be tape of bands like The Modifiers playing at Antenna? Turns out, I needn't have worried. Antenna owner Steve McGehee knows everybody. By the time Antenna premiered at Indie Memphis in 2012, we had amassed more than 100 hours of vintage video, hundreds of still images, and 88 interviews, some of which were three hours long.

It's difficult for me to talk about Antenna today. After winning the Audience Award and a Special Jury Prize at Indie Memphis 2012, we have tried in vain for years to find finishing funds to pay for the music licensing fees. I am extremely grateful that enough people remembered Antenna to vote it onto the list. Hopefully one day, everyone can see it. Until then, this is the only bit of untold Memphis music history I can share with you:

One of the highlights of Indie Memphis 2017 was Shelby County Mayor Mark Luttrell proclaiming Friday, November 3 Best of Enemies Day. Director Robert Gordon, who helped originate the project he co-directed with Morgan Neville, has had a long and distinguished career as a writer and director before winning an Emmy for Best of Enemies. In 2012, a film he produced with Irish director Paul Duane made waves at Indie Memphis. Very Extremely Dangerous opens with Gordon and Duane almost getting in a car wreck with their subject Jerry McGill, a 70 year old junkie, criminal, and Memphis musician. McGill had been diagnosed with terminal cancer, and he brought along Duane and Gordon's camera to record his final comeback performance/crime spree. To call Very Extremely Dangerous a harrowing watch is a dramatic understatement, but somehow, McGill comes out of it as a sympathetic character.

Memphis-born Ira Sachs has long been one of the most intimate and truthful directors of the indie era. He got his start in the Bluff City before Indie Memphis got rolling with The Delta, an autobiographical coming-of-age story. In 2005, when Hustle & Flow won the audience award at Sundance, Sachs' film Forty Shades of Blue won the Grand Jury Prize. Keep The Lights On is the story of an extremely dysfunctional relationship between Erik (Thure Lindhardt) and Paul (Zachary Booth), a filmmaker and lawyer living in Sach's adopted home of New York who can't help but bring out the worst in each other. Sachs keeps the audience's expectations vacillating between "I hope these two kids can get it together in the end" and "They need to stay the hell away from each other." It's a story about the joys and limits of romantic love.

Keep The Lights On was the first film in a trilogy of sorts from Sachs about trying to stay human while living in New York. 2014's Love Is Strange stars John Lithgow and Alfred Molina as a pair of longtime partners whose love is finally legal, but who are unexpectedly ripped apart after they finally tie the knot. 2016's Little Men is a story Sach says was inspired by his Memphis childhood about friendship between kids from different social classes who find their lives disrupted by the creeping gentrification of Brooklyn. Sachs' work is humane, beautiful to a fault, and absolutely required viewing for Memphis film fans.

Remember when you were in high school and thought, "We should make a movie about our crazy lives!" Well, Alanna Stewart and Katherine Dohan actually did it, and their film is probably much better than yours would have been. The two White Station High Schoolers, with the help of Brett Hanover, created a home grown, magical realist masterpiece—imagine if Pretty In Pink had been written by Gabriel Garcia Marquez. Morgan Rose Stewart (sister of the director) stars as Molly, a woman who finds herself growing very-not-metaphorical wings in her senior year, just as she is preparing for college and the big essay contest. The practical special effects and handmade animation sequences carry considerable visual punch, but it's the unmannered acting and wild expanse of it all that elevates What I Love About Concrete to the level of the sublime. The film won at Indie Memphis, and has the distinction of being Commercial Appeal movie writer John Beifuss' only acting credit.

"I sometimes find it easier to reveal intimate details about myself through art. This is prime example" says Laura Jean Hocking. After spending years locked in a small dark room with me editing Antenna, Hocking wanted to do something completely different. She wrote, produced, and directed this Midtown memoir completely by herself. It is at once a celebration of place, a confession, and a series of visual experiments. Hocking collaborated transatlantically with Memphis expat musician Jimi Enck, who scored the film while living in London.

At the 2017 Indie Memphis festival, Hocking and her co-director Melissa Anderson Sweazy won Best Hometowner Feature and the Audience Award for their documentary Good Grief about kids who have experienced tragedy and the counsellors who help them at the Kemmons Wilson Family Center for Good Grief in Collierville.

I WANTED TO MAKE A MOVIE ABOUT A BEAUTIFUL AND TRAGIC MEMPHIS from oddly buoyant productions on Vimeo.

By 2013, Indie Memphis' profile had risen high enough to land the biggest films on the festival circuit. Destin Daniel Cretton's film Short Term 12, loosely inspired by his time as a counsellor in a group home for troubled teens, swept the Independent Spirit Awards and launched the career of Brie Larson. As one of the biggest vote-getters in the poll, it remains a favorite of Indie Memphis audiences.

Here's a little story that tells you what film festival life is like. In 2013, I was on the screening committee for Indie Memphis. We were tasked with finding the eight best features out of the hundreds of applicants that flood into Indie Memphis every year. Late in the season, we had whittled the list down to about a dozen when we noticed that no female directors were represented on the short list. Since it was pretty inconceivable that, in 2013, no women had made and submitted a decent movie, we dug back into the pile of DVDs. At the bottom was It Felt Like Love by Eliza Hitman, and when we popped it into the player, we were absolutely riveted. It was clear that this coming of age film was by far the best thing we had seen that year, and we almost lost it in the shuffle. Later, at the festival, the judges (who are not members of the screening committee) agreed, and It Felt Like Love won 2013's Best Narrative Feature award.