March 30, 2018
comment
Like a lot of people who follow political news way too closely, I’ve been thinking a lot about Russia lately. I’ve found myself regarding the country’s broken democracy as a kind of collateral damage from the Cold War. When the Soviet Union’s politically repressive system disintegrated, it was replaced with a system of economic repression that only vaguely resembled capitalism as its most fervent adherents describe it. Under the rule of former KGB agent Vladimir Putin, it has become essentially a mafia state run by and for the benefit of oligarchs. Putin’s interest in installing Trump in the American presidency is his version of “promoting democracy”. His goal is to extend the rule of oligarchs indebted to him to our hemisphere. In other words, its our turn to experience Cold War collateral damage.

In Andrey Zvyagintsev’s Loveless, collateral damage looms large and spreads wide. The person most damaged is Alexy (Matvey Novikov), son of Zhenya (Maryana Spivak) and Boris (Aleksey Rozin). The Leningrad couple is in the midst of one of the most bitter onscreen divorces since Kramer vs Kramer. We first meet Alexy in a long, symmetrical shot of the front door of his school. Kids run free at the dismissal bell past a Russian flag hanging limply from its pole. Friends chatter and conspire excitedly, but Alexy walks home alone through the winter woods, past a frigid pond. When he finds a discarded streamer in the leaves, he is at peace for a few precious moments between the torture of school and the emotional black hole at home.

Boris, who has a well-paying sales job in an anonymous cube farm has a new, pregnant girlfriend named Masha (Marina Vasilyeva). Zhenya has a new, rich boyfriend named Anton (Andris Keiss). Neither one of them seem to care much about Alexy. Zhenya mentions casually to Boris that, once she sells the couple’s apartment, she plans to ship the boy off to boarding school and then the army. “He’s starting to smell like his father,” she tells her stylist as she’s getting waxed. 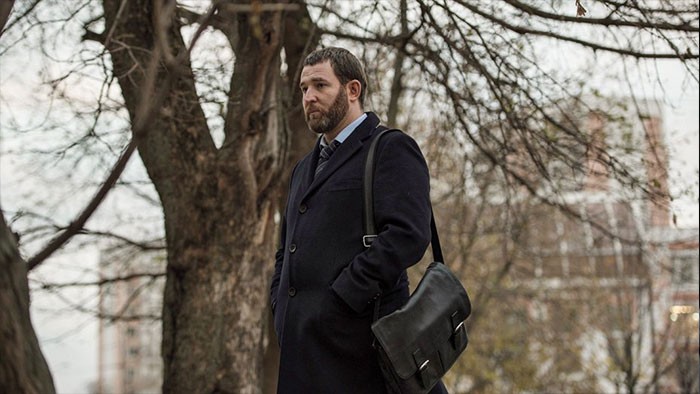 When Alexy goes missing, no one notices for two days. When the police get involved, they’re not much better. The chief inspector in the case says “the little dolt is probably hiding in a mall somewhere.”

But, he’s not. The bitterly bickering couple is reluctantly pressed together again to look for a son they don’t even really like, aided by cops who seem put out that they have to do their job. The search for Alexy gives viewers a tragic tour of contemporary Russia, from ruined Soviet facilities that wear their socialist optimism like a tattered old coat to the countryside where Zhenya’s bitter mother (“She’s a mixture of God and the Devil”) clings to vodka and fundamentalist Christianity. For a Western audience, there are moments of stunning recognition (“Look! Russians have bad sex just like we do!”) alternating with moments of profound alienation and sadness.

Zvyagintsev’s clearly an acolyte of Kubrick and the giant of late twentieth century Russian film Andre Tarkovsky. He knows when to use Kubrickian symmetry, and when to get up in someone’s face—one shot of Alexy crying bitter tears while hiding from his mom behind a door will stay with me for a long time.

This is a gut wrenching human story, but it’s also clear that Zvyagintsev and his frequent collaborator, writer Oleg Negin, see this film in political terms as well. The action takes place against a backdrop of propaganda barely disguised as news broadcasts that will be chillingly familiar to anyone who has listened to right wing talk radio or watched Fox News. I am sure that there are many sly moments of cultural commentary that flew completely over my head, but would land for a Russian audience.

Loveless, won the Cannes jury prize and was nominated for Best Foreign Language Oscar. It’s a wrenching, deeply thoughtful film that, once it casts its spell, makes it impossible to turn away.