April 27, 2018
1 comment
Doctor Who premiered November 22, 1963. It was an immediate hit, and over the years the hokey show about a time-traveling weirdo became a cultural touchstone. By 1983, the production team was at the height of its powers. The lead role was in the hands of the young and charismatic Peter Davidson, and the budgets were bigger than ever. In the post-Star Wars afterglow, the show finally made the jump to America. The BBC decided to celebrate the 20th anniversary with the greatest crossover event in television history: They would bring together all the actors who had ever played the Doctor for one universe-shattering adventure. After months of hype, “The Five Doctors” premiered on November 23, 1983. It was a disaster.

Getting the giant cast together was a nightmare of bruised egos and diva behavior. The most important actor, Tom Baker, pulled out late in the process, so writer Terrance Dicks had to rewrite around some clips of Baker salvaged from a scrapped episode. The ratings were good, but not significantly better than a normal week’s viewership.

Worst of all, “The Five Doctors” exposed the weaknesses that the show’s fanbase had learned to overlook. There were still great moments to come—in 1984, the series produced “The Caves of Androzani”, now regarded as an all time high—but viewership faltered, and before the decade was out, Doctor Who was cancelled. In the internet comment board fever swamps, this is what’s known as “jumping the shark.”

I think you can see where I’m going with this.

Picking up where Thor: Ragnarok left off, Avengers: Infinity Wars gets off to a strong start. Spaceships full of refugees from destroyed Asgard are intercepted by Thanos (Josh Brolin), who slaughters them and extracts the Infinity Stone from the Tesseract held by Loki (Tom Hiddleston). Bruce Banner (Mark Ruffalo) narrowly escapes the destruction and rides the Rainbow Bridge, opened by Heimdal (Idris Elba) to Earth, where he warns Doctor Strange (Benedict Cumberbatch) and Tony Stark (Robert Downy, Jr.) of Thanos’ plan to collect all six Infinity Stones, artifacts of immense power that control Mind, Soul, Space, Time, Power, and Reality, and use them to destroy half of all life in the universe.

One thing Infinity War has going for it that other superhero movies have struggled with is a compelling villain. Brolin’s Thanos, until now a barely glimpsed, purple skinned mound of muscle, turns out to be surprisingly complex. He gets some fine scenes with his two adoptive daughters, Gamora (Zoe Saldana) and Nebula (Karen Gilian, who has emerged as one of the best Marvel actors). Directors Anthony and Joe Russo are at their strongest when they take time to concentrate on pairs of characters, such as the doomed romance between Vision (Paul Bettany) and Scarlet Witch (Elizabeth Olsen), or the science/magic rivalry between Stark and Strange. Chris Hemsworth’s Thor gets paired off with Rocket (Bradley Cooper) and teenaged Groot (voiced by Vin Diesel), which makes for some pleasantly goofy comedy beats. But everything else seems rushed, thin, and worst of all, calculated for maximum fan service, such as when the Guardians of the Galaxy are introduced singing along to The Spinners’ “Rubberband Man”. Our heroes make a stand in Wakanda, but the snap Ryan Coogler brought to Black Panther is missing. The potentially touching reunion of Banner and Natasha Romanov (Scarlett Johansson) is completely botched. 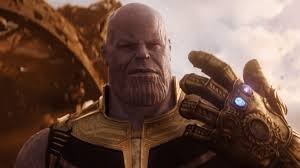 What ultimately sinks Infinity War is the unsolvable problem that sank “The Five Doctors”—the need to fit in references to 19 other Marvel movies. This is a film designed for superfans, and it could please many. But there inevitably comes a moment in long, episodic serials when the audience realizes that the catharsis they seek will never come. The demands of capitalism means there can never be a satisfying ending, and each installment of the story is reduced to a commercial for the next one. One way to read the ending of Infinity War is as a bold departure from formula. Another, more accurate way to read the ending is the plot equivalent of the moment in A Christmas Story when Ralphie uses his new Little Orphan Annie decoder ring to discover that the secret message is “Be sure to drink your Ovaltine”. It’s the moment when all of the superheroes team up to collectively jump the biggest, most expensive shark of all time.