May 31, 2018
1 comment
In its century long history, Hollywood has produced a handful of characters that have become icons of American manhood. Nick Charles, The Thin Man, was a hard living, but elegant aristocrat. John Wayne’s Ringo Kid from Stagecoach was the archetypal cowboy: laconic, upright, uncomplicated. Rhett Butler was an irresistible scoundrel. Humphrey Bogart’s Rick Blaine was a heartbroken cynic finding his way back to virtue in Casablanca. James Dean’s teenage misfit Jim Stark was the Rebel Without A Cause. Peter Fonda rode a motorcycle named Captain America on an LSD fueled trip in search of his nation’s soul, while Chris Evan’s Captain America was thawed out of the arctic ice to remind us of the better angels of our nature. The 1990s brought us both Will Smith’s wisecracking fighter jock from Independence Day and Tyler Durden, Brad Pitt’s hallucinatory, revolutionary alter ego. 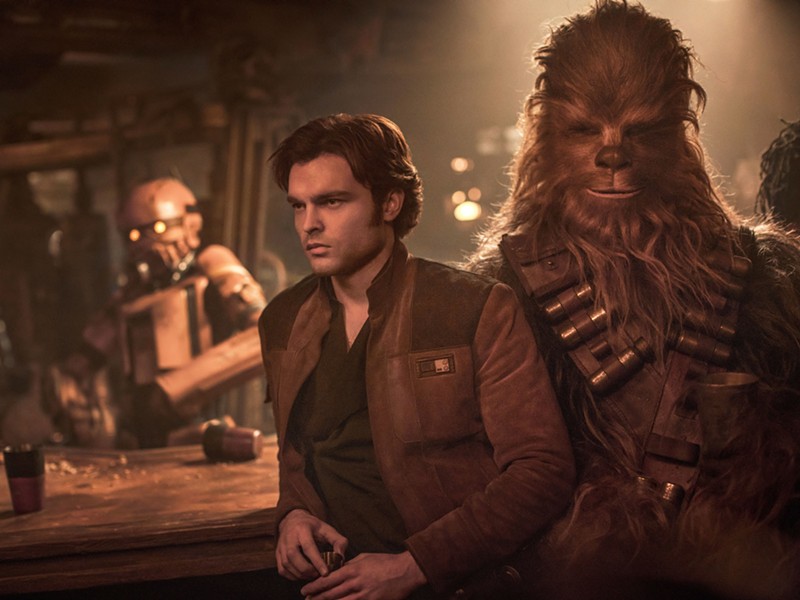 Then there’s Han Solo. When he first appeared in Star Wars, Harrison Ford was still a part time carpenter. Four years later, when he introduced Indiana Jones in Raiders of the Lost Ark, Ford was the biggest movie star in the world, and would remain at or near the top of the heap well into the twenty first century. Befitting Lucas’ postmodern pastiche approach to space opera, Solo was a mixture of Rick Blaine’s fractured romanticism, a card playing smuggler like Rhett Butler, a quickdraw gunfighter like Wayne, and unrepentant ladies man like, well, all of them. His ostensible role was to provide a counterweight to Luke Skywalker’s boundless optimism, but he was the one all the boys wanted to be and, when he won the hand of Leia in The Empire Strikes Back, the one all the girls wanted to be with.

Han was the outsized focus of the franchise’s earliest spinoffs. In the 70s and 80s, Luke and Leia got one spinoff novel, Splinter of the Minds Eye. Han Solo and Chewbacca’s adventures filled three volumes, then, in the 2000s, three more. When Disney bought Lucasfilm and started cranking out Star Wars movies on the regular, it was inevitable that Han would take a starring role. It started out promising, when Lawrence Kasdan, the screenwriter for The Empire Strikes Back and Raiders of the Lost Ark put together a script, but Solo: A Star Wars Story turned into a textbook troubled production when the original directors, Phil Lord and Christopher Miller, were fired after four months of shooting. Lucasfilm honcho Kathleen Kennedy hired Ron Howard to clean up the mess, who was met with howls of derision from the fans. Lord and Miller are comedy directors who, it was hoped, would take Star Wars in a new direction. Howard was a safe choice, a Hollywood veteran with a reputation for unremarkable competence.

And that’s exactly what Howard brought to Solo. Kasdan, writing with his son Jonathan, constructed a solid series of heists gone wrong, shootouts, and chase scenes. We first meet Han (Alden Ehrenreich) as a street urchin boosting speeders on Corellia. His latest score, a batch of coaxium, a volatile spaceship fuel, is valuable enough to get him and his girlfriend Qi’ra (Emilia Clarke) off planet. But the plan goes quickly wrong, and the pair are separated. Desperate to escape his organized crime pursuers, Solo joins the Imperial Navy, hoping to become a pilot. Three years later, our hero’s washed out of flight school and is fighting with the stormtrooper grunts in the trenches of the swamp planet Mimban when he discovers a crew led by Tobias (Woody Harrelson) in mid-heist, and deserts the army to join the pirate life.

The problem with Solo does not stem from its chaotic production history. It’s that the star never fills the role. Ehrenreich is upstaged by literally every member of the supporting cast. Clarke’s performance is assured and nuanced, better than most of her work on Game Of Thrones. Woody Harrelson steals every scene he’s in. Donald Glover’s turn as Lando Calrissian is absolute, caped perfection. Even Chewbacca, played by Joonas Suotamo under the tutelage of Peter Mayhew, is more magnetic than Ehrenreich.

To be fair, filling the shoes of Harrison Ford is an impossible task that would have defeated the vast majority of actors. Take it from someone who has to sit through a lot of true crap: this is not a bad movie, and far from a return to the bad old days of Attack Of The Clones. There’s plenty of swashbuckling and primo spaceship action, but also a fair amount of box-checking fan service. The sight of the crystal skull from the tomb of Xim the Despot and Lando’s offhand mention of the Starcave of ThonBoka make my sad little geek heart grow three sizes, but will mean nothing to the casual moviegoer. Howard’s pedestrian direction gets the job done while underlining the greatness of Rian Johnson’s work on The Last Jedi. The bottom line is, Solo is a fun two hours at the movies, while also being an all-too predictable disappointment.