June 08, 2018
comment
One thing the great filmmakers of the 1970s valued above all others was intensity. That’s evident in a pair of the decade’s masterpieces—Taxi Driver and Raging Bull—that were collaborations between director Martin Scorsese and writer Paul Schrader. 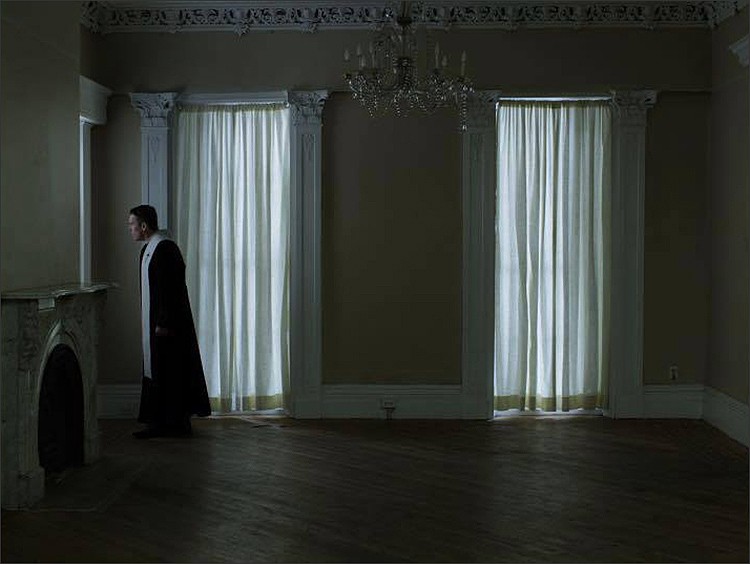 Schrader is something of a legendary figure in Hollywood, which is understandable when you see his filmography. He appears in the infamous New Hollywood gossip epic Easy Riders, Raging Bulls holed up in the Hollywood Hills with a pistol and a pound of weed, furiously pounding out the script to American Gigolo. Schrader called those films “man alone in a room stories.” They, along with his films like Auto Focus, rotate around a single individual, tortured, mysteriously driven, and often trying to make sense of a chaotic world. Usually, the protagonists, like Travis Bickle, come apart in the end in some spectacularly weird fashion.

First Reformed is a major comeback for Schrader, now 71. In this case, the man alone in the room is Ethan Hawke as Toller, an Episcopal priest in rural New York. His titular church was a stop on the Underground Railroad, but now it’s a dwindling congregation in a fading town. Toller spends more of his time giving tours to leaf peepers and school groups than ministering to his flock. That’s why, when Mary (Amanda Seyfried) asks him for counseling, it’s something of a relief. Her boyfriend Michael (Philip Ettinger) is a environmental activist who just got out of prison in Canada on charges related to an oil sands pipeline protest. Mary is pregnant, but Michael doesn’t want her to have the baby. He no longer thinks the fight against climate change is winnable and believes its wrong to bring a child into a world that is doomed to foreseeable catastrophe.

The scenes between Hawk and Ettinger are brutal in their intensity, even though they’re just two people sitting alone in a room, talking. In his diary, which Schrader uses as a voice over device, Toller says the philosophical, scientific, and theological debate felt “exhilarating” like “Jacob wrestling the angel”.

The repercussions of that single conversation echo through the lives of the three characters. Toller was an Army chaplain whose son was killed in Iraq, driving him from the service and breaking up his marriage. He’s struggling to keep his psyche together and his job intact as the 250th anniversary of the founding of his church approaches. Mary and Michael’s dilemma puts pressure on him at exactly the wrong time as he prepares for a ceremony where his megachurch-leading boss Pastor Jeffers and the governor will attend, bringing unwanted attention to a man who just wants to disappear.

Hawke puts himself into the frontrunner position for the 2018 Best Actor Oscar with his performance as a strong but brittle man nearing his breaking point. Schrader’s screenplay is unsparing in its honesty and directness. Toller’s inner turmoil is existential, but grounded in real world pain. The situations are entirely believable and throughly of today, but Toller’s philosophical ponderings are right out of Shakespeare. Is it all, in the end, worth it?
The film’s unsparing intensity is at once its greatest strength and biggest weakness. To watch First Reformed is to stare unsparingly into the most basic, unanswerable philosophical questions we have. It is, as Toller says, both exhilarating and exhausting. Schrader earns his depth—there’s no such thing as gratuitous Christ imagery in a film with a priest for a leading man—but it’s about as subtle as a gold brick to the face.