June 18, 2018
comment
This is the fourth superhero movie review I will write this year. People have been asking me, are you sick of them? The answer is yes.

But I still get excited about a sequel to The Incredibles. The Brad Bird film is a top tier Pixar creation, one of the best superhero movies ever made, and, since it was released in 2004, clearly way ahead of the curve. 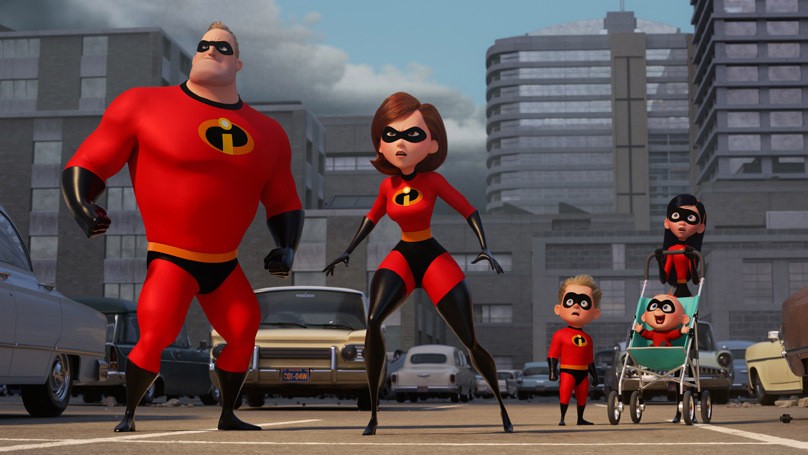 Incredibles 2 opens pretty much immediately after the events of the first film. Tony (Michael Bird), a classmate of Violet (Sarah Vowell), is recounting the events of the attack by the Underminer (John Ratzenberger) that served as the original’s coda. His audience is Rick Dicker (Jonathan Banks), a government operative whose job it is to keep secret the true identities of superheroes. Dicker dutifully erases the memory of moment when Tony saw Violet without her domino mask on, which has the unfortunate side effect of erasing all memory of her, including the fact that they had a date tomorrow night.

The battle against the Underminer provides the bravado opening action sequence any self-respecting superhero movie wants to have, and it immediately outdoes most all of them. The kinetic sections of The Incredibles, like the fight with the Omnidroid, were groundbreaking, and in the five-superhero-movie-a-year timeline we find ourselves in, frequently copied. Fourteen years worth of Pixar technological advances get splashed up on the screen in the first ten minutes, and it’s, well, incredible. A few jokes seem to be written just to show off the water modeling advances. The depth of the image in some shots is mind blowing, even in 2D. IMAX is definitely the preferred format for this one.

With the help of Frozone (Samuel L. Jackson), Mr. Incredible (Craig T. Nelson), Elastigirl (Holly Hunter), Violet, Dash (Huck Milner) and Jack-Jack stop the Underminer’s destructive rampage, but they still run afoul of the secret bane of every superhero—massive property damage liability. About to be cut off by their government benefactors, the heroes are contacted by Winston Deavor (Bob Odenkirk), a telecom tycoon who wants to mount a campaign to legalize superheroes once and for all. He and his sister Evelyn (Catherine Keener) have crunched the numbers, to discover that the least destructive super hero in existence is Elastigirl. They offer to back her with a generous salary, a new Mid Century Heroically Modern house, and most importantly, insurance.

After a heartfelt talk, the Parrs decide to accept the offer, even though it means that Mr. Incredible will be a stay at home dad to three super kids of varying ages. From there, the film falls into what is now a familiar episodic pattern. Pixar’s studio mates Marvel have succeeded by emphasizing character over plot, and Incredibles 2 follows suit. Mr. Incredible’s parenting tribulations are put on a equal footing with Elastigirl’s increasingly perilous confrontation with Screenslaver. Incredibles 2 once again proves that the key to truly great superhero films is a strong villain with the timely Screenslaver, who uses smartphones and TV screens as tools of mass hypnosis.

Judging from the responses of opening night audience, Jack-Jack is the breakout star of the picture. Trying to keep tabs on a toddler is hard enough for Mr. Incredible, but Jack-Jack is exhibiting all kinds of new superpowers, like eye lasers and shape changing. His ability to travel through parallel dimensions provides a great opportunity for Bird to stage a Poltergeist callback with Nelson, who plays the beleaguered dad in both films.

Bird, who returns to voice super-designer Edna, makes a major comeback after his last film, the disastrous Disney corporate branding assignment Tomorrowland. Incredibles 2 fires on all cylinders, but now that we’re all immersed in the expected beats of the superhero movie, it lacks the shock of the new felt in 2004. But it’s a genuine crowd pleaser that rewards viewing on the big screen, which is what a summer movie is all about.