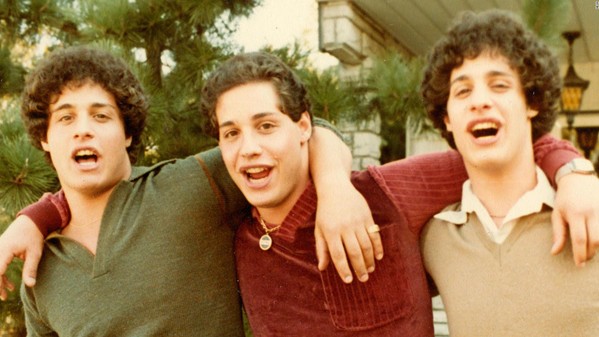 The documentary Three Identical Strangers tells the story of three college-age kids in 1980 who discovered they were triplets by accident. It covers their initial dream-like excitement, then unravels the reasons for their separation at birth.

Told in modern documentary style, no head is ever onscreen for an entire sentence, cutting multiple times away to re-enactments with faces tastefully obscured, stock footage, home videos, and slow zooms into old pictures. Emotive instrumental music puts the viewer into the mood of these disembodied quotes: Things must be understood immediately, and rushed along. Every further explanation is presented as a shocking reveal.

The material rewards this approach: The story is compelling. The three brothers got to fulfill the Cinderella-like fantasy of having a new family and a secret history. And then, over the course of their lives, the fantasy darkened.

The triplets, David Kellman, Robert Shafran, and Eddy Galland, initially became famous upon the discovery of their connection. We see them joking with Donahue and Brokaw on talk shows, cameoing in Madonna’s Desperately Seeking Susan, and opening their own New York restaurant named "Triplets" (scored to "Scenes From An Italian Restaurant" by Billy Joel, of whom they all look like a younger version).

Director Tim Warble's style works best at conveying their euphoria, savoring the details of Shafran's first day at college, where everyone already knows him and calls him Eddy. The fast cutting widens to include the viewpoints of his entire tripartite extended family, and beautifully sells the idea of being caught up in an unexpected reunion.

Strangers nods to more idiosyncratic documentaries. The surviving siblings look into the camera in the manner of Errol Morris’ Interrotron, while almost everyone else has a traditional, off-camera eyeline. We see sped-up, tilt-shifted New York crowds set to a Phillip Glass-ian score. But the film's dominant style is of its production company CNN Films — that of a televisual newsmagazine. To emphasize points, the film recycles its own footage and sound bites, apparently not expecting viewers to remember things said less than an hour before.

Since the documentary presents itself as a mystery, I won't offer any spoilers. Centered around the Louise Wise Services adoption agency and a study by the psychologist Dr. Peter Neubauer, the movie builds to a shocking reveal that never quite comes, like it would in a Morris doc. Without a face for its villain, the film parlays its vagueness into attempted heartwarming support for "nurture" in the nature vs. nurture argument — the triumph of family over genes. It then concentrates the viewers' ire on anonymous, bureaucratic sources of power: the adoption agency, researchers, and the modern custodians of that research. What ultimately weakens the film isn't its efficient style but an unhappy ending. It creates a tension but can never release it. It's a call to action that partially works.

Hierarchical structures concentrate power at the top, and when they do wrong, it takes great effort by individuals at the bottom to right the wrongs. This film has resulted in the release of some files, while alleging there are adoptees who still don't know they were separated at birth from siblings they've never met. It makes one long for a Panopticon showing everyone's misdeeds, for transparency in all things. While such openness would make life uncomfortable, with every institution and person's awful pasts on display, it would prevent any past, like that of these brothers, from being irretrievable.