Ever since I saw Werner Hertzog’s 2010 documentary Cave Of Forgotten Dreams, I have been interested in—possibly obsessed with—deep prehistory.

Homo sapiens—us—are only about 200,000 years old, and for 150,000 of those years, we had no art beyond decorative beads and jewelry made from seashells. Then, about 40,000 years ago, something happened—complex, figurative art appears. The paintings in the Chauvet caves which Hertzog captured in his documentary represent a complete change in how humanity interacted with the world, and how we understood ourselves.

Alpha is an ambitious film about another such moment when humanity changed: the domestication of dogs. The 3D film is set in postglacial Europe 20,000 years ago. Keda (Kodi Smit-McPhee) is a young man coming of age in a hunter gatherer tribe. He sets out from the village on his first hunt with a band led by his father Xi (Jens Hultén). Their mission is walk a torturous path laid down by ancestors as far back in their past as they are in ours. At the end, they will intercept a herd of migrating bison and, if they’re lucky, bring back enough food for the tribe to make it through the winter.

But it turns out Keda kinda sucks at being a caveman. It’s hard to be a good hunter when you’re too kindhearted to kill. Plus, he’s really bad in the fire-making department. When they finally find the elusive bison, he’s separated from the hunting band in the resulting melee and left for dead. 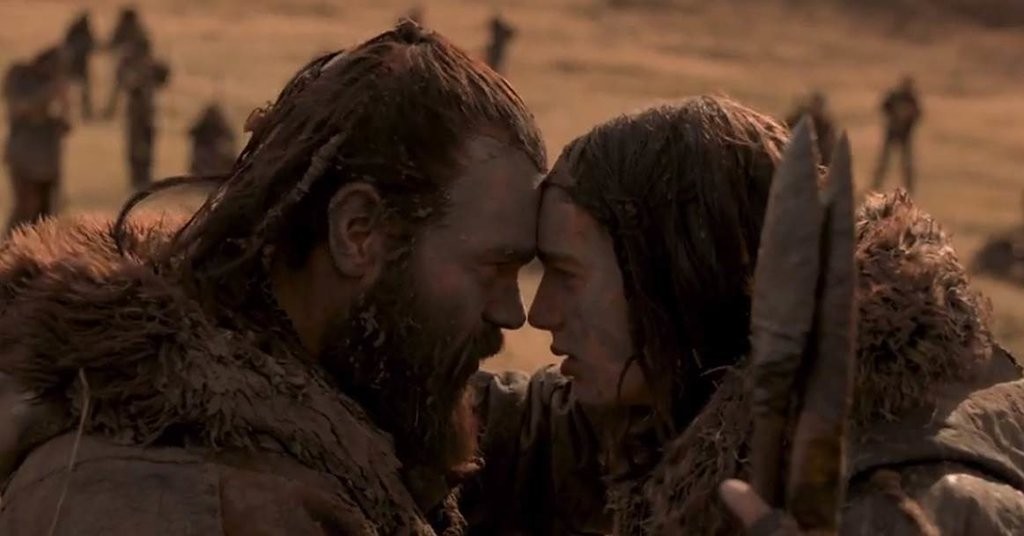 Through a combination of luck and pluck, Keda survives, alone in the harsh world. When he’s attacked by a pack of wolves, he drives them away, and they leave behind a wounded wolf. Instead of slaughtering it for food, he takes it back to the cave where he’s found shelter, and together they nurse each other back to (relative) health. Then the unlikely and still untrusting pair try to make their way back across the steppe to Keda’s village.

The film is the first solo effort from Albert Hughes, a director who has formerly shared a credit with his brother Allen for films like Menace II Society and From Hell. It is very nearly derailed right at the opening, when the story starts with the buffalo hunt before flashing back a week to what were surely the original opening scenes in the village. I’m sure this was the result of someone thinking this pastoral picture needed to start with a bang, but it was exactly the wrong thing to do.

Instead, they should have trusted the intelligence of their audiences and the power of the performance from Smit-McPhee. Long stretches of Alpha are wordless, and the rest is in a language that is supposed to be something like Proto-Indo-European, with English subtitles. That’s a hard row to hoe for an actor (ask anyone who has ever tried to play a Klingon on Star Trek how easy it is act in a made-up tongue), but amazingly, the young lead pulls it off, becoming more endearing with each near death experience.

But the Paleolithic proceedings really take off when Chuck the wolfhound arrives. This is a Lassie-level performance from a canine star who can summon easy laughs with a hangdog look. Smit-McPhee and Chuck have easy chemistry, and Hughes knows how to throw just enough challenge at them to keep it interesting. You really believe that every day life for these early people is like The Revenant, only with more psychedelics and shamanism.

Alpha has moments when it descends into cheese, and somehow, the parade of prehistoric 3D spectacle never looks quite as good as the Dawn Of Man sequence from 2001: A Space Odyssey. There's also the nagging question of why Keda would name his proto-dog Alpha when the Greek alphabet wouldn't be invented for another 17,000 years. But Alpha ultimately won me over with its pluck. It’s not a perfect movie, but its heart is in the right place, and that’s what counts.