MXT vs IMAX: Which Big Screen Format Is Better?

In Malco’s newest theater, the Powerhouse Cinema Grill, the region’s dominant theater chain debuted a new theater design they call MXT. In December 2016, theater one in the Malco Paradiso was converted to IMAX. The giant screen and booming sound system is generally considered to be the gold standard of theatrical film viewing experience. At the Powerhouse press tour on March 7th, Malco representatives were touting MXT as superior to IMAX.

Is that true? Well, it's complicated. Creating a viewing experience is really more a matter of finding the best solution to a set of variables than it is simply buying the perfect equipment and plugging it in. Some of my best film memories are from squinting at a CRT in a dorm room, and I’ve had painful viewing experiences put on by supposed professionals. It’s all relative. As I tell young filmmakers when they ask about cameras, the best one is the one you know how to use.

Your average living room HD flatscreen presents an image that measures 1920 pixels horizontally and 1080 pixels vertically. If you sprung for a 4K TV last Christmas, you’re looking at a 4096 X 2160 pixel picture. The current highest possible resolution outside of a lab is 70 mm IMAX film. That venerable format, familiar from museum settings and Disney World, is said to be the equivalent of 8K digital video. But that number is a rough estimate at best, as comparing digital video to analog is apples to oranges. Most digital cinema screens installed in the last 10 years use 2K (2048 X 1080) projectors, which provide more than three times as much “visual information” over a much larger area than your home HD set. Digital IMAX screens, like the one at the Paradiso, generally use a pair of proprietary 2K projectors working together, which greatly increases the light and provides a stereo visual channel for 3D, but doesn’t significantly increase the resolution.

But projector resolution is only one variable. If you’ve got a 4K TV, but the movie you’re watching was shot on a 2K camera, those extra pixels aren’t going to do you much good. Even on a big home screen with a clean signal, the difference between a 1080HD and a 4K screen is not going to be terribly apparent to casual viewers. Only when you blow the image up to theater size will you begin to see a significant difference.

You might have done a little mental math earlier and come to the conclusion that conventional 35mm film stock would have a higher pixel resolution than the 2K digital projectors that replaced them. But once again, that’s comparing apples to oranges. The intricacies of information theory notwithstanding, digital projection as a whole has been an improvement, says Malco Theaters Regional Director of Digital Operations Scott Barden. Film projectors are fragile, complicated machines, and celluloid film runs the risk of damage every time it’s run through one. Yes, a pristine print on a finely tuned and perfectly maintained film projector with a brand new bulb will probably look better than 2K digital projection, but that has always a rare set of circumstances in the real world. Barden says digital projection has allowed Malco, who, unlike many theater chains, take their presentation seriously, to present a more consistent product to audiences.

Where IMAX has an advantage over conventional theater projection is in the control of the variables. The screens are huge, and the theaters are custom built to take advantage of the unique, curved geometry of the IMAX. Until last week, theater one in the Paradiso was the undisputed champion of the city’s screening rooms.

The new MXT theater in the Powerhouse Cinema Grill is built like a conventional theater. Malco VP Karen Melton said its screen is virtually identical to pre-IMAX Paradiso theater one. But the projector is a brand-new, state of the art 4K laser phosphor model. The new projector presents a number of advantages for the theater. For decades, the heart of the projector has been a xenon light bulb of enormous power. They work great, but they have a number of disadvantages. First, a lot of the electricity fed into the bulb is wasted, as it is converted to heat instead of light. All that access heat has to be removed from the projector through a vent that goes through the roof of the theater. Lasers are much more efficient at producing light, and so produce a lot less heat, which can be dissipated without sawing a hole in the ceiling. Second, the expensive bulbs wear out, losing lumens over time until they eventually have to be replaced. Running one full blast will result in rapid degradation. “We typically run xenon lamps at a certain level so we get a very even drop off of the light level,” says Barden. “You don’t really notice over time. There’s not going to be a big drop off a the end, the way we run the bulbs.”

The laser-phosphor projector uses high wattage blue lasers fired through a constantly changing matrix of color filters to produce an image. More light makes it to the screen, and there’s no bulb to burn out, which greatly reduces maintenance costs.

Last Thursday, the stars aligned such that I was able to make a direct comparison between the two systems. I watched the Live Aid sequence from Bohemian Rhapsody on the Powerhouse MXT screen, then caught the Captain Marvel premiere at the Paradiso IMAX.

Which one was better? Visually, I would call it a toss up. The clarity and color of the image from the MXT 4K laser projector is mind blowing. But that IMAX theater architecture really does have a big effect. For Captain Marvel, I bought my ticket only 10 days in advance, so I was stuck in seat A-13—front row center, and it was fine. It’s true there are no bad seats in that theater.

The big difference was the sound, where MXT has the advantage. In keeping with their goals of creating an immersive experience, IMAX is configured to maximize the subwoofer boom effect. Rattling the chest makes those big explosions feel more visceral. Malco opted to pair a Dolby Atmos system with the 4K laser projector in the MXT theater. “The audio is something we wanted to do specifically for large format,” says Barden. “It’s got full Dolby Atmos, a 38-channel surround sound system, which is spectacular for the auditorium.”

For creating an immersive experience, I’d much rather have Atmos than 3D. With the exceptions of Avatar, The Walk, and Alita: Battle Angel, 3D has never risen from gimmick to art form for me. But you should never underestimate the power of great sound design. The entire horror genre is practically built on it. 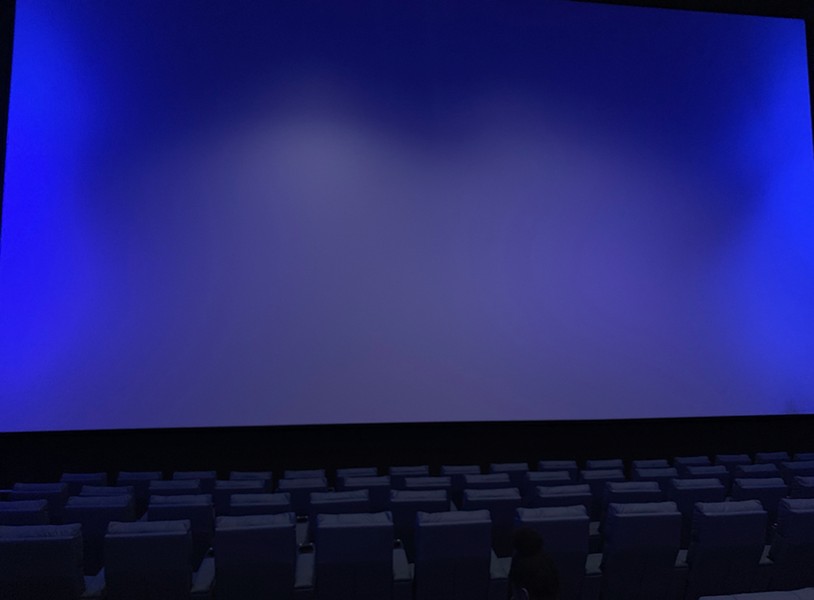 For me, the bottom line comes down to the source material. If some or all of the film you’re going to see was shot in the IMAX format, such as Christopher Nolan’s Interstellar, then you should see it in the IMAX theater. For any other film, including big Hollywood productions such as the digitally shot Marvel and Star Wars franchises, I would choose the superior sound at the Powerhouse MXT. But unless you’re a nerd like me, either theater is going to deliver a good experience — as long as the movie is good. Which is something else entirely.

[This piece was edited to clean up errant pixel counts.]