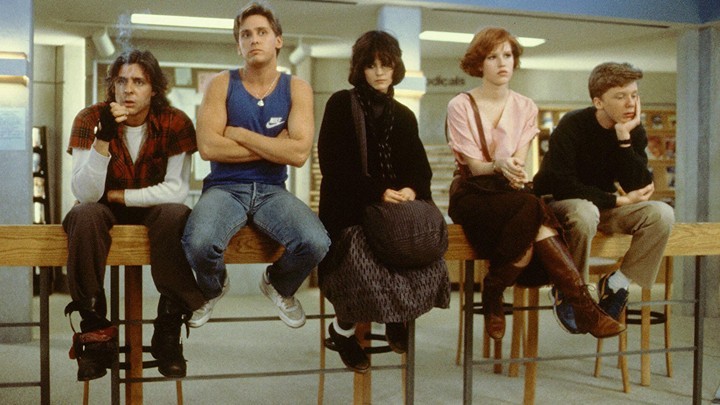 Time Warp Drive-In organizer Matt Martin says the most requested theme in the six-year history of the monthly retro movie night has always been the teen '80s movies of John Hughes. Saturday night, April 20th at the Malco Summer Drive-In, Time Warpers will get their wish.

Hughes grew up in suburban Grosse Point, Michigan. After getting his start with National Lampoon, he became one of the most prolific and successful writers of his generation. For better or worse, his insightful depictions of high school hierarchy became the default view of teenage life in the '80s and '90s. When they were released, they were often controversial due to their frank depictions of teenage sex, drugs, and rock and roll, while teenagers of the time praised the emotional honesty. Today's audiences in the teenage target demographic might find the film's almost exclusively white cast and creaky gender role assumptions problematic. It's the rare artist who can remain controversial over the decades, only for changing reasons.

Ferris Bueller's Day Off is probably Hughes' tightest screenplay, comedy wise. Putting the majority of those words in the mouth of a fourth-wall breaking Matthew Broderick made it an instant classic. Would Bueller have gotten away with his low-key crime spree if he'd been a black teenager who couldn't leverage his white privilege? Probably not. Does he show signs of borderline sociopathy? Arguably. But when this film is really clicking, you can't help but root for Broderick's portrayal of the consummate teenage con man with a heart of gold.


The Breakfast Club is Hughes at his most empathetic. He created the perfect portrayals of the teenage stereotypes of the jock, the beauty queen, the introvert, the waste-oid criminal, and the geek, and then proceeded to rip them to pieces by revealing the scared and hopeful people underneath.


Weird Science was Hughes' second film as director in 1984, and, as the title says, it's probably his weirdest. In what must be the most egregious example of the Manic Pixie Dream Girl in film history, two nerds, Gary (Anthony Michael Hall) and Wyatt (Ilan Mitchell Smith) use...well, weird science...to semi-accidentally create a super-powered supermodel, played by real life supermodel Kelly LeBrock. But like most stories of summoning a genie from a lamp, the wishers end up getting more of what they need than what they think they want.


The Time Warp Drive-in rolls at 7:30 PM on Saturday, April 20th at the Malco Summer Drive-In.