What is the essence of Spider-Man? Is it the hyphen?

In a time when people are pushed to accept some kind of singular identity, Spider-Man is hyphenated. Peter Parker (Tom Holland) would prefer to be just an ordinary teenager, but he got bit by a radioactive spider, and with great power comes great responsibility. So he's trying to live the best of both worlds.

Spider-Man is both a teenager and a superhero, which means he is both a powerful archetype and a member of the target audience for Marvel Comics. He’s like Shazam in that way. Superman is an alien; his everyman routine is just that — a routine. Bruce Wayne is so super-rich, he’s aspirational, but that also makes being Batman unattainable to us down here among the proletariat. Wonder Woman is literally a demigod. Spider-Man is just a teenager like you, only he’s got an opportunity for greatness. How he balances that opportunity with the needs of teenage life is the essence of the Spider-Man.

In Spider-Man: Far From Home, Parker just wants to go on a class trip to Europe, and possibly get with MJ (Zendaya) in the process. Being Spider-Man is cool and all, but kissing MJ on the Eiffel Tower would be truly amazing. Unfortunately for him, Spider-Man is on the agenda of Nick Fury (Samuel L. Jackson). Newly Avenger-less after the deaths of Iron Man and Black Widow, and the retroactive retirement of Captain America, he needs a new team, and Tony Stark picked Parker as his successor. Plus, there’s a new threat brewing.

In an opening scene reminiscent of Close Encounters of the Third Kind, Fury arrives upon a scene of devastation at a Mexico town with his S.H.I.E.L.D. right-hand woman Maria Hill (Cobie Smulders). A group of inter-dimensional elemental monsters is causing havoc worldwide, and only one hero, the similarly inter-dimensional Quintin Beck (Jake Gyllenhaal), aka Mysterio, knows how to fight them.

The key to making a good superhero movie is having a good villain. Gyllenhaal delivers as the vain, weaselly Beck. He and Holland, who is now in his fifth friendly neighborhood outing, have an enviable chemistry as they move from allies to enemies.

But remember, Spider-Man is also a teenager. So there’s a second movie going on at the same time as the Spider-plot. This one is more Hannah Montana. Peter’s plan to present MJ with a token of his love is repeatedly thwarted by his teacher (J.B. Smoove), Happy Hogan (Jon Favreau), and Nick Fury’s catspaws. His best bud Ned (Jacob Batalon) gets a chance to have his own relationship arc while covering up for his super friend’s unexplained absences when Spider-Man shows up.

If those were the only two movies unspooling here, Far From Home would be pretty good. The action sequences are decently constructed, even if some of Mysterio’s psychedelic sequences invite comparison to the superior Into the Spider-Verse. The tour of Europe frame allows for a Bond-esque travelogue feel. It’s a fairly simple comic plot, with thematic overtones that make it relevant in our world, where people rule by illusion. 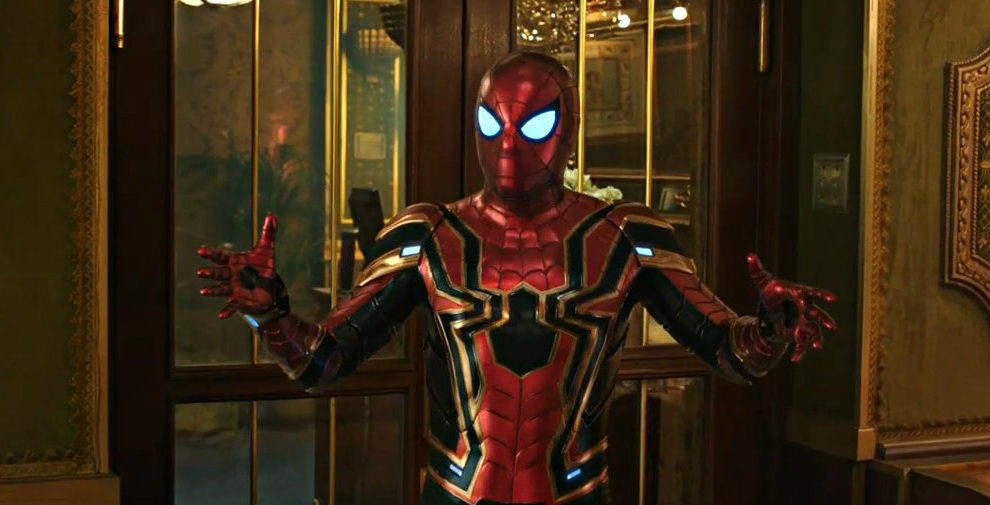 What drags Far From Home down is the perceived necessity to fit the story into a continuum with the larger Marvel Cinematic Universe. Way too much time is spent cleaning up after the events of Avengers: Endgame, especially during the film’s early passages. Tony Stark posthumously chooses to tap Peter Parker as the heir to his technological superhero operation, and it somehow diminishes the Friendly Neighborhood Spider-Man. Yet another subplot with Peter’s Stark handler Happy Hogan attempting to woo Aunt May (Marisa Tomei) is simply wince-inducing.

I understand the need to bring Spider-Man into the MCU after years in the Sony wilderness, but after the unabashed triumph of Into the Spider-Verse, there’s a strong argument for making Spidey an animated franchise and turning Marvel’s live-action resources towards finally doing a decent Fantastic Four adaptation. Spider-Man works better when he’s alone, just a scared high school kid trying to negotiate a crazy world where Jake Gyllenhaal wears a fishbowl on his head.