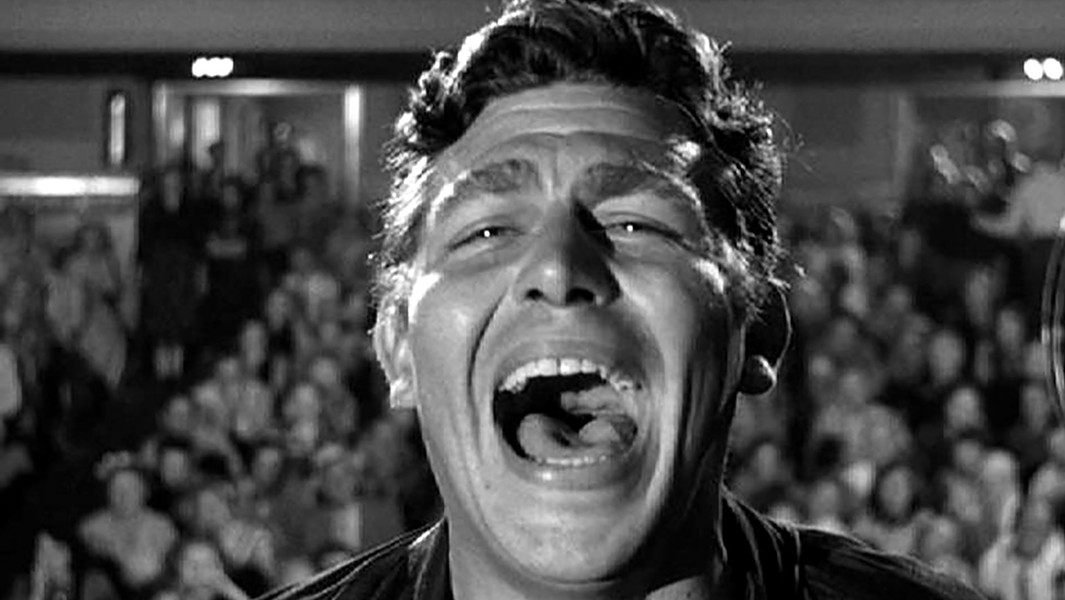 Merriam-Webster, the internet's favorite dictionary, defines a "demagogue" as "a leader who makes use of popular prejudices and false claims and promises in order to gain power." The American fear of the persuasive power of demagogues in a democracy goes all the way back to the Founding Fathers, who fretted that a "man of low cunning" might some day rise to be president. Welcome to 2019.

At the movies, there have been numerous cautionary tales of demagoguery, such as All The King's Men, Bullworth, and Network. The granddaddy of them all is Eliza Kazan's 1957 film A Face In The Crowd. Written by Budd Schulberg, who had collaborated with Kazan to create On The Waterfront three years earlier, it tells a distinctly American story that will seem all too familiar today. Larry Rhodes is in a chain gang in Arkansas when he's discovered by radio host Marsha Jefferys.  He's a singer, guitar player, and master country-boy bullshitter. It's the third part that gets him the farthest in life. After Marsha dubs him "Lonesome" Rhodes, he becomes a favorite guest on her radio show, before spinning off into his own program. Wildly popular with the rural heartland crowd, Rhodes gradually evolves into a political commentator, then becomes a political figure himself.

Kazan and Schulberg said Rhodes was originally inspired by comedian Will Rodgers, but he's got a distinctly Elvis feeling to him, which is not surprising, considering the film was being conceived in Elvis' miracle year of 1956. To play the lead, Kazan tapped an unknown young actor named Andy Griffith, and he absolutely knocked it out of the park. It's hard for audiences familiar with his wholesome sitcom image and second career as crusading lawyer Matlock to image Griffith as "edgy" and "dangerous," but he drips with Trumpian malevolence, as you can see in this clip, where he plays opposite Patricia Neal as his mentor Marsha.

A Face In The Crowd screens at 7:30 on Thursday, September 19th as a part of Crosstown Theater's Arthouse series. Tickets are $5 at the door.