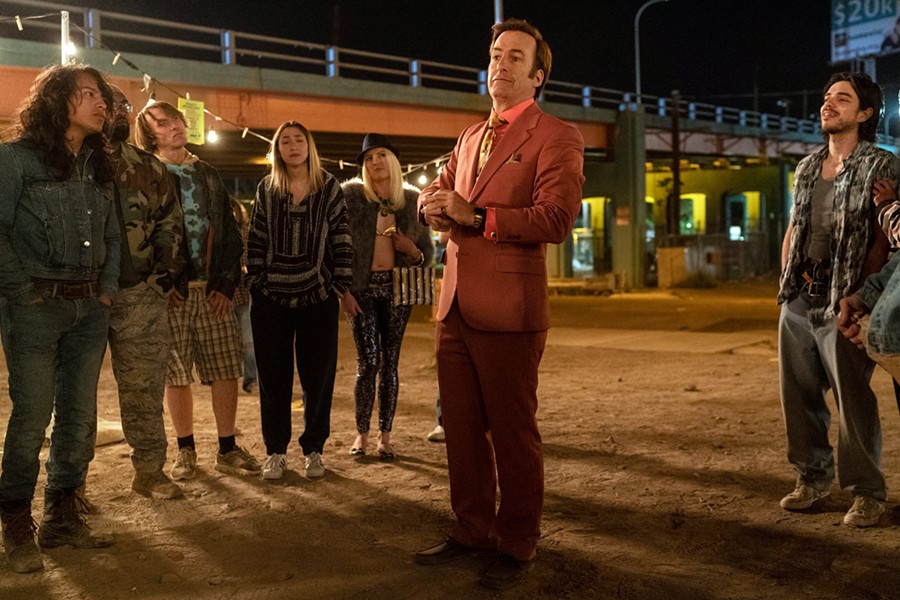 Here’s the trouble with prequels: Their ostensible reason for being is to explore an intriguing backstory suggested by their parent story. But here’s the rub: If the backstory was that interesting to begin with, it should have been the original focus of the story. Prequels are always at a disadvantage, story-wise.

This might be a daunting problem for most writers, but showrunners Vince Gilligan and Peter Gould are not most writers. Now, seven episodes into their fifth season of the Breaking Bad prequel Better Call Saul, they’re using the story of small-time shyster Jimmy McGill’s transformation into sleazy lawyer par excellence Saul Goodman to draw some of the deepest characters ever attempted on television. Like Titanic, we all know the ship is going to sink, and the important part is how it looks to the people on deck.

This penultimate season has been about the characters’ duality, the gaps between how they present themselves to the different people in their lives, and what that says about who they are inside. Bob Odenkirk has been masterful in his presentation of the slide from Jimmy the screw-up prankster to the calculating, creepy Saul. Jimmy/Saul is, like any expert manipulator, a fine observer of people. But his blind spot is himself. He can fine-tune his personal presentation to fit the audience he needs to con at the moment, but he is either unwilling or unable to turn his piercing insight inward. The closest he comes in season 5 is the end of episode 7, “JMM,” when he sees the family of a person his drug lord client Lalo (Tony Dalton) murdered. But his crisis of conscience is short-circuited when he sees his old nemesis, Howard Hamlin (Patrick Fabian) and explodes in a self-aggrandizing tirade that buries Jimmy under an avalanche of Saul.

But that’s only one of a slew of great performances. Giancarlo Esposito’s stone cold demeanor as Gus Fring, the meth kingpin disguised as a fast-casual restaurant owner, is as nuanced a performance as you will ever see. Unlike Jimmy/Saul, Gus — who, it is hinted, was a soldier before he was a drug lord — knows himself, and the clarity of his self-knowledge is his greatest strength. In season five, we find that Gus tries to balance the evil that he does with good works back home in rural Mexico. His interior steel brings his fixer Mike (the brilliant Jonathan Banks) out of his funk after having to execute a friendly German engineer last season.

This season’s surprise MVP, it’s Rhea Seehorn as Kim Wexler, Jimmy’s super-lawyer girlfriend. She alone sees the struggle between Jimmy and Saul, and tries to put a finger on the Jimmy side of the scale. Kim is the most ambivalent of them all. She reacts to Saul’s betrayal, which endangers her brilliant career, by forcing him into a marriage that is clearly the best thing that could happen to the guy. But, as her blowhard client Kevin (Rex Linn) points out to her in a rare moment of clarity, she could do so much better than Jimmy. Her ultimate goals, and how she intends to get there, remain a mystery.

Better Call Saul’s emphasis on character has been at the expense of the twisty, intricate narratives Breaking Bad did so well. The exception was episode 2 of season 5, “50% off,” where Saul Goodman’s introductory special of half-off felony defense representation sparks an epic crime binge that becomes the catalyst for Jimmy’s spiraling entanglement with the Salamanca drug cartel. A recurring theme has been meta-commentary on filmmaking itself. There’s a lot of overlap between the legal profession and acting, and Gilligan and Gould have found ways to blur the lines between the two. At one point, Saul becomes a director when he and his film student friends produce a TV commercial to gain leverage in a case against the Mesa Verde bank.

Breaking Bad helped launch the era of “prestige television,” and while it has spurred many imitators, its high points have rarely been equalled. Better Call Saul’s effortless virtuosity gives you what you really want out of a prequel — a chance to return to a familiar world and live there for a little while.