Palm Springs is Comedy with a Big Heart 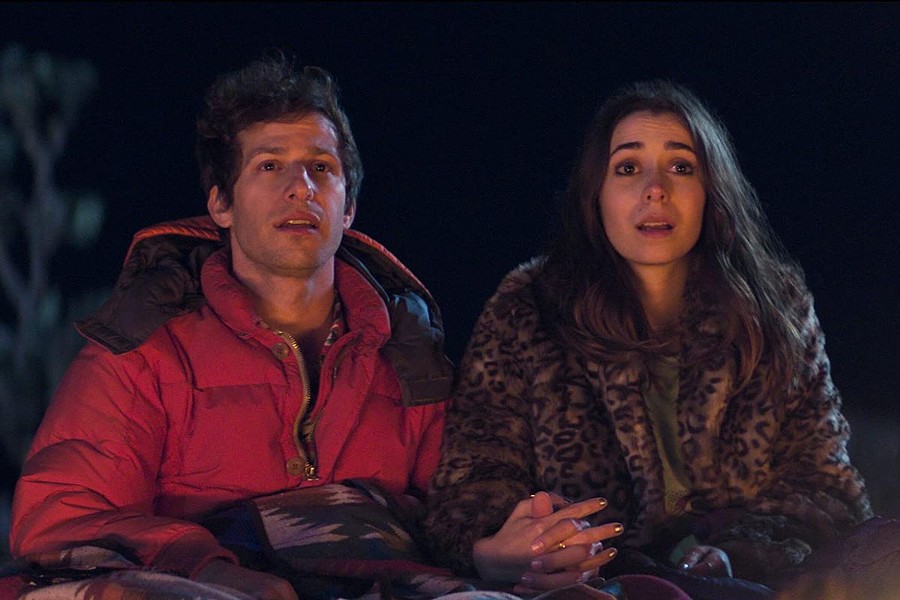 For screenwriters, Groundhog Day is the gift that keeps on giving. Danny Rubin’s spec script combined a simple sci-fi premise — a person stuck in a time loop, endlessly repeating the same day over and over again — with a deeply humanist message of repentance and self-forgiveness. In the hands of director Harold Ramis, the 1993 film gave Bill Murray the opportunity for one of film history's all-time great comedic performances.

Nobody outside the Star Trek universe was willing to touch the time loop trope for decades until a recent spate of projects, created by people who grew up with Groundhog Day on repeat on cable TV, have taken a crack at it. The results have been not too bad, beginning with the Tom Cruise vehicle Edge of Tomorrow, which was little seen due to a horribly botched marketing campaign. Most recently, the Netflix series Russian Doll gave Natasha Leone a chance to shine in the Bill Murray role.

Lonely Island, the folks who pioneered the digital comedy short, riffs on Groundhog Day with Palm Springs. They’ve got a good track record (seek out Popstar: Never Stop Stopping if you’ve never seen it), but if you’re going to play in the Ramis/Murray sandbox, you better bring your A game.

Nyles (Andy Samberg) wakes up in a Palm Springs hotel room. He’s there with his girlfriend Misty (Meredith Hagner), who is a bridesmaid at her friend Tala’s (Camila Mendes) destination wedding. Nyles spends the day of the wedding pounding beers in the pool and shows up to the ceremony still wearing his swimsuit. At the reception, Nyles meets Sarah (Cristin Milioti), Tala’s big sister, who is as deep in her red wine as he is in his beer. Sarah describes her relationship with her family as “I’m a liability who fucks around and drinks too much,” and when she is asked to give a speech about her sister, Nyles rescues her by giving a seemingly unplanned talk that is exceedingly eloquent and full of personal details that “Misty’s boyfriend” probably shouldn’t have known. As the party winds down, Nyles ditches Misty, and he and Sarah head out into the California desert. But just as it’s go time for their drunken wedding hookup, Nyles is attacked by a mysterious figure with a bow and arrow, and he flees into a cave. When Sarah tries to follow him, he warns her off. But it’s too late. When Sarah wakes up the next morning, it’s yesterday morning. She’s trapped with Nyles in what he calls “one of those infinite time loop situations you’ve heard about.”

Once the place setting is out of the way, Palm Springs can concentrate on its real strength: character work. Samberg might get top billing — understandable, since he’s the lead in the hugely successful Brooklyn 99 — but the real star of the film is Milioti. She’s been good in supporting roles, such as Fargo’s outstanding second season, but Palm Springs gives her the opportunity to stretch out and show what she can do.

Cinematographer Quyen Tran makes the most of Milioti's big, expressive eyes. She can hold her own doing schtick with a comedy vet like Samberg. Their chemistry together is excellent, which is a mission-critical factor for this rom-com hybrid. The script by writer Andy Siara, who had a hand in the criminally underrated series Lodge 49, avoids descending into a Rachel Getting Married retread by drawing each character as fleshed out as possible. Even Roy, Myles’ time-looped stalker played by the great J.K. Simmons, is rescued from pure heel status. And best of all, director Max Barbakow wraps the whole thing up in at a brisk 90 minutes.

Like Groundhog Day, Palm Springs delivers the yucks but has a lot more on its mind. Why keep going when things seem hopeless? What good is personal integrity when your little bit of virtue will disappear into the maelstrom of a world gone mad? This film is a good example of how great comedy can both bring escape and shed a little light in the world.

Palm Springs is currently playing at the Malco Summer Drive-In.