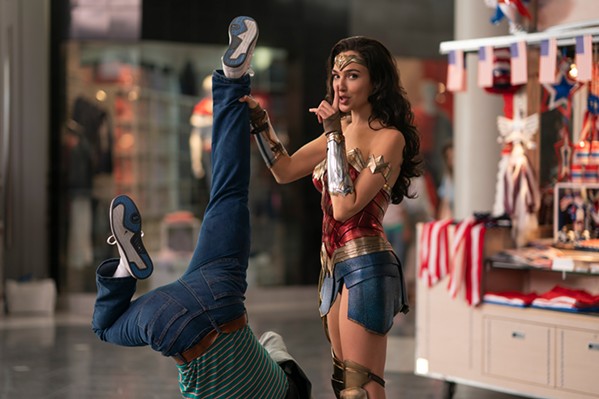 Mark Cousins’ Women Make Film provided some much-needed solace when it aired this autumn on Turner Classic Movies. The 14-hour documentary series traced the overlooked contributions of female directors from Alice Guy Blaché to Greta Gerwig. Using the frame of a virtual film school, Cousins narrated clips from literally hundreds of films, demonstrating how the directors achieved effects like controlling the flow of time, or how to use sex scenes to advance the story.

For the action section, Cousins presented one of the most iconic moments the superhero genre ever produced: Wonder Woman’s charge across No Man’s Land from Patty Jenkins’ 2017 film. It is the perfect encapsulation of the character’s appeal. The men are hunkered down in their trenches, insisting the problem can’t be solved. They’ve tried nothing, and they’re all out of ideas! Wonder Woman quickly assesses the situation, straps on her armor, and gets it done, exposing the men’s macho posturing as mere vanity.


In the context of a highlight reel from legends like Ida Lupino and Agnès Varda, the scene more than holds its own. Jenkins starts out intimate, with Gal Gadot as Diana Prince doffing a drab cloak to reveal her colorful armor, then expands steadily to reveal the sweep of the battlefield, and the strength of the forces opposing our hero. The hail of bullets Diana deflects with her shield stand in for every cruel and cutting remark offered by a sneering man to every woman who knew what they doing but couldn’t get anyone to listen to her.

Where the hell was that Patty Jenkins for Wonder Woman 1984? The much-anticipated sequel comes after a horrible, superhero-less year. We could use a little uplift right now, at the end of four years of Trump’s macho misrule, and who better to deliver it than the symbol of female competence and virtue?

Gal Gadot was up for the challenge. The genetically superior super-being is a quintessential movie star, able to hold the screen by just being there. Her first turn at Wonder Woman proved that, while she may not be Meryl Streep, she’s got the chops to deliver some light comedy and pathos along with the Amazonian gravitas. After an opening flashback in which young Diana competes in a kind of Themysciran ultra-quidditch, Gadot makes her entrance in full super-mode. Some crooks in the employ of Trumpian TV rich guy Maxwell Lord (Pedro Pascal) are busting up a jewelry store which acts as a front for international antiquities smuggling. Since we’re in 1984, the action takes place in a mall. Wonder Woman intervenes to throw out quips and tie up bad guys while preserving Reagan-era shopping enjoyment.

We last saw Wonder Woman in 1918, but since she’s a demigoddess, she hasn’t aged a day. Being an emotionally balanced career woman rather than entitled basket case like Batman, Diana’s got a day job as an anthropologist for the Smithsonian. It’s rewarding, but she faces the classic problem of an immortal living among mortals: loneliness. Her true love Steve Trevor (Chris Pine) sacrificed himself for the greater good at the end of the last movie, so despite Diana literally being the perfect woman, she sips her pinot alone.

Diana makes a new work friend in frazzled archeologist Barbara Minerva (Kristen Wiig), and the two are called on to find the provenance of a mysterious artifact rescued from the mall robber’s haul. It’s a crystal bound with a metal band, inscribed with Latin that claims to grant wishes. Diana finds the artifact has real power when she inadvertently uses it to bring Steve back to life. When Barbara wishes she could be “more like Diana,” she is shocked to gain not only the ability to walk gracefully in heels, but also super strength and nigh-invulnerability.

It’s about here, as we enter hour two of a film that is two minutes shorter than Apocalypse Now, that the writers of Wonder Woman 1984 discover what Dungeon Masters have known for years: If you introduce an artifact that grants wishes, you have to use it sparingly, or your narrative will quickly fly off the rails. While Diana enjoys some well-deserved (and, to be fair, well-acted) canoodling with Stevie-boy, Maxwell Lord charms the still-naive Barbara into giving up the wish crystal. He then wishes to actually become the wish crystal.

I’m not sure why the standard “I wish for unlimited wishes” gambit wouldn’t have worked, but I’m just here to observe and report. Lord’s poor wishmanship leads to a situation where he can’t wish things for himself, but must force others to wish things to him. It turns out that the wish-granting magic balances the universe by taking away something of equal value from the wisher. Ain’t that always the way? Lord’s play is to use that “take things away” power as leverage over the wishers. This leads to a shockingly ill-conceived scene where Lord cons an Arab leader out of his oil by restoring his ancestral caliphate. It really is 1984, Iranian hostage crisis xenophobia and all!

Meanwhile, Barbara has lost the humor and humanity that made her Diana’s only friend as she becomes Wonder Woman's arch enemy Cheetah. Wiig is, of course, an incredibly gifted comic actor. She and Jenkins seems to be going for something similar to Michelle Pfeiffer’s transformation from Serena Kyle to Catwoman in Batman Returns, but it never gels. It doesn’t help that Cheetah’s final costume makes her look like a stray from Cats.

From there, Wonder Woman 1984 steadily loses coherence as it slogs towards an uninspired climax. Jenkins’ intention seemed to have been to resurrect the positive spirit of the Richard Donner Superman films, a worthy goal to counteract the hopelessness of 2020. Indeed, there are shades of Superman II. The price Diana pays for bringing back her lost love is the loss of her invulnerability. Like Superman, she must chose between human love and the super powers she will need to save the world. But Donner’s great gift was for the clarity he needed to tell the elemental story of Superman and Lois Lane — aided in no small part by Mario Puzo’s screenplay.

Somewhere along the line, Jenkins lost the plot. Wonder Woman never loses all of her power, never has to taste to taste human vulnerability and solve problems only with her wits. Jenkins can still conjure up a good set piece, such as the Fury Road-inspired riff where Diana and Steve drive a taxi to take on a column of armored vehicles. But it lacks emotional resonance because the movie can’t find the courage to commit to the bit. Wonder Woman fans deserve better.