Black Lodge Video started out as an independent video store in Cooper-Young in the late 1990s. Founders Matt Martin and Bryan Hogue were mostly looking for a way to feed their passion for collecting movies on VHS and DVD, but when they outlived their corporate competition to become the last video store standing in Memphis, it was clear that the Lodge had become something more. It was a hangout store, an artist’s salon, a no-budget film school, a venue for outré music, and a haven for the weird kids.

But even the Black Lodge couldn’t stand against the power of Netflix, finally closing in 2014. Bryan Hogue bowed out, but Matt Martin and a group of would-be entrepreneurs kept searching for ways to bring back the Lodge magic. Finally, in late 2019, the re-envisioned Black Lodge opened at 405 N. Cleveland in the Crosstown neighborhood. It was a much bigger space, meant to combine the video store with an arcade and a flexible theater space for film screenings, bands, DJs, or theatrical performances.

But thanks to the pandemic, the Lodge is on shaky financial ground. They're asking for help with a crowdfunding campaign and an upcoming live-streaming telethon.

I spoke with Martin about the campaign to save the Black Lodge. Our conversation has been edited for length and clarity.

Matt Martin: Literally six months. Obviously, there were years of planning, and once we implemented it in September, 2019, we knew we were going to be having to run thin. Everybody's going to have to work a lot and get paid very little for that first six months. But we could make it work if we fought and cut every corner. We had gone through Halloween and New Year's, which for us like any other venue is the big time. They were hugely successful nights. It told us what we needed to know, which was the space was working. The people liked it. Cut to February of 2020. We can actually get the last of the loans together that will help us build out a kitchen. And then of course, what no one could have expected showed up. The entire new business model was designed around live shows, movie screenings, club nights, parties, so 80 percent of our revenue disappeared overnight. Not just us, every bar, every venue all over the country, same exact thing. We've lost a bunch that may never get to come back. We knew when it came here to Memphis and when it was time to shut everything down, that the only hope of survival was to lean on the video store and see if we could just pay the basics and make it to the other side.

Right off the bat, we were absolutely touched. Huge numbers of people at the beginning of COVID didn't want to go out anywhere, and rightfully so. Many could have canceled their memberships with us. We sent an email about that and said, look, for the first month of this, we've got to completely shut the doors just to be safe. And we're going to hope to crawl it back open in May, which is when we wound up reopening. It was one of those early signs that Memphians are wonderful people who love art and fight for the things we have that are unique in this city. Almost no one canceled. People would call me and say, ‘I am not going to be able to come during COVID, but I don't want you to stop charging me. I want you all to survive.’ That was a beautiful and touching. And it really has been our saving grace from when COVID broke till now, just the goodness of people agreeing to let their memberships keep going. As COVID stretched on, we actually started to gain people, because there were so few things for anyone to do. And of course, we had to implement all kinds of safety precautions, like temperature checks at the door, mass required hand sanitization, no more than five or six people in the store at a time. We've tried to be as safe as humanly possible.

This all went on so much longer than any of us thought. We knew there's only so long we can survive at this level. A lot of the reason we were able to make it was because the landlords were good enough to slash the rent down to the very basic, just to give us some time.

CM: They’ve got to realize that, if you guys aren't here, what's going to be here? There's not gonna be like an Urban Outfitters coming in here to replace you in the middle of a pandemic.

MM: Exactly. Like, you might eventually, but for now, you're just going to be stuck with an empty building you're paying insurance and utilities on. That's worked very well, even though we've even had to limit the hours we're open, just because we can't afford to pay enough people to be here. When we got past New Year's, it became clear that if, if this is going to drag on as long as we're fairly sure it will, safe shows of the nature of which we give are not feasible probably till the fall. And even that is speculating that vaccinations go well over the next six months. We realized we're cutting so close to the bone we may not make it. For every bar right now, it's a waiting game. How long can you go with a minimal amount coming in and still get the bills paid, keep the heat on and make it to the other side? Because we all know, especially those of us in the business of throwing nightlife, that when it's safe to do so again, it will be huge, bigger than it was before, because so many people have gone so long without being able be around other people and see a band, or sit in a movie theater and watch a movie together.

We've hesitated a long time in asking for help, mainly because everyone needs help right now. It almost felt bad to say something when other places were suffering, when other people were suffering more. When we set it up, we were like, let's do an Indiegogo so that we can offer rewards for every level and give something back, make it something more exciting for people to get involved.

And right off the bat, we were flabbergasted at the generosity of everyone. We went over the analytics of the donations. It wasn't, you know, 19 rich people out in East Memphis gave us $500 to $1000. It was nickels and dimes, five bucks, 10 bucks — the norms were low and clearly large numbers of people just gave what they had at a time when no one has anything. That blows me away. Obviously, I'm touched personally, and thankful for the business, but there's another level of it that I think speaks loudly about how good people can be, and how giving they can be, even when they have nothing left. Memphis is an arts town. We make music here. We make great food. We make movies. It's wonderful to see the populace show once again, as they have time and time before, that they're ready to fight for unique things and don't want them to go away. They don't want those things that make Memphis Memphis to disappear. And I'm proud to have gotten to that point where people think that way about Black Lodge, We started as just two guys in a video store, in the middle of a beat-down house. I never thought that many people would ever come around. It turned into something very big in the cultural zeitgeist of the city.

CM: If the pandemic wasn’t enough, you lost Bryan Hogue last year, too.

MM: That was the most painful thing of all. He'd had some health problems, and it was something we feared. I was heartbroken as a friend and heartbroken as a business partner to lose Brian from the world. But after it happened, not dozens, but hundreds of people came in, sometimes just to say, ‘He was a gruff, crazy guy, but when he would talk to me about movies, he inspired me to want to see new things and to find new art.’ It helped them and changed their lives a little. I wish he had been here to see how many people he touched. I wish he'd been here to see how well this fundraiser has gone! When we put it together, even I'm like, you know, nobody's got anything right now. It's not that people don't want to give, it's that they don't have anything to give. And yet they did. 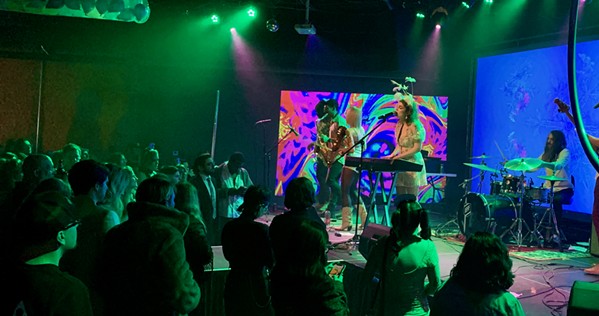 CM: Tell me about the streaming telethon.

MM: It’s the third weekend in March, the 19th and 20th. We are going to be doing a two-day streaming telethon that's going to incorporate a good dozen bands — local, of course— local films, local music videos, and local performance art of various types. It’s going great so far. I would love to say I thought of this telethon, but I want people to know this is, again, about the goodness of other people who walk in the door. Sara Moseley, Frank McLallen of the Sheiks, they came to me. We never asked them for any of this. We can all do prerecorded sets, but none of us want a dime for this. We just want to help because all of us have played a show at Lodge had a great time. But they’re also saying, we’ve got to work together. We're musicians. We need places to play when this is over.

CM: What is Memphis without juke joints and punk clubs?

MM: Exactly. There’s a whole universe of phenomenally talented musicians that need places to play, places to do their sound. They're not easy to sell in a simplified bar venue on Beale, where there's a certain sound, and that's what we do here. So when they came to me, they said let us arrange this. We'll do all the work. They went and looked for sponsors. They reached out to sound engineers. They reached out to people who just said, yes, I will give of my time, expect nothing back. And that alone brought me to tears. It really hit home right then. We're lucky enough to be in a city that cares about art and artists. We're lucky this city is full of good people.