A lot of people have their attention on the skies above, afraid of unmanned government predator drones, unpredictable weather, or even alien invasions. But it's not the sky you have to worry about it's the ground beneath your feet. No, I'm not talking about mole people. I'm talking about my greatest fear...sinkholes. 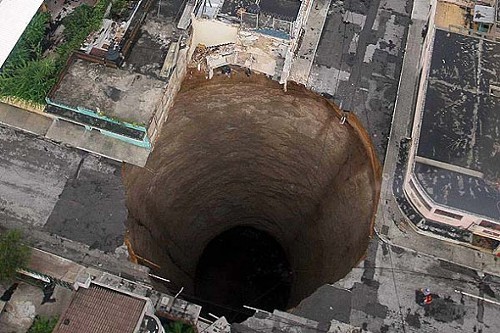 Sinkholes occur when underground water erodes the bedrock above it creating a cave that grows increasingly unstable until it collapses. Also according to my old catholic sunday school teacher, when you touch yourself.

And if creating a giant hole to a dark deadly death pit isn't terrifying enough, they are also virtually unpredictable and undetectable. That's right. Sinkholes are the Batman of natural disasters.

You're at Yolo, flirting with Jessica the cute girl behind the counter. You ask her what the difference is between gelato and ice cream (even though you know the answer) and then she asks...SINKHOLE!!!

Or maybe you're in line to see a movie and you can't decide whether or not you want you want to go see The Lone Ranger . I mean you've read some bad reviews, but your a really big Johnny Depp fan. He usually has a good eye for scripts, plus you... SINKHOLE!!!

What's that reader? Your saying to yourself, "Not me Mike! Maybe sinkholes are eating peoples swimming pools in places like Florida, but not Memphis". Well, what if I throw some knoweldge at your "I'm not afraid of sinkholes, McCarthy is just a crazy guy who is 25 and still afraid of the dark, also this might be some sort of metaphor for why he's afraid to be in a committed relationship" face!!!

Just read this article about a home in North Memphis being directly threatened by a ninja sinkhole. Or this report about sinkholes in Downtown's Tom Lee park!

Scared now? Feel like running away to a tropical paradise where you can relax and not worry about the earth swallowing you whole? Sounds like a good plan maybe you can grab some pina coladas and...SINKHOLE!!!