Elvis Trivia Nobody Has Ever Heard Before

by Fly on the Wall

1. Elvis' favorite small appliance manufacturer was Sunbeam. It is rumored "Burning Love" was originally written as a jingle for the toaster manufacturer.


2. Elvis hated the comic strip Alley Oop, and would draw a fake mustache on the title character out of spite each week.

3. Elvis was considered for the lead role in The Godfather. 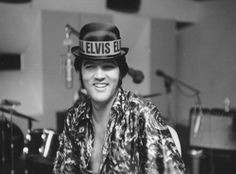 
Elvis first encountered 80's band Winger in a meditative vision of the future.

8. Elvis' middle name is commonly misspelled. It is actually "Aronn"

9. Elvis wrote To Kill A Mockingbird under the pseudonym of Harper Lee.

10. Elvis was an honorary member of the National Society of Quail Enthusiasts.

12. Designers presented Elvis with more than 170 shades of white and off white before manufacturing the first iconic jumpsuit.

13. Elvis gave all of his close friends unusual nicknames. He affectionately referred to Col. Tom Parker as “Turd Blossom.”

14. Elvis often wore a disguise consisting of a top hat, monocle, and false mustache to go out in public as Lord Jiggleton. He would greet people by simply shouting "Blimey!" at them in a loud, fake British accent.

17. Elvis and George Klein would often do puppet shows for Dutch children, which delighted the youth to no end!

18. The hit song "Return to Sender" was inspired by the true story of a man who mailed a letter only to have it returned. 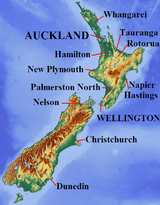 19. Elvis was the first person to have contact with New Zealanders.

23. Elvis had a giraffe named Becky that he kept in his jungle room.

25. Elvis regarded the Jungle Room as a vast improvement over the original Tundra Room.

27. After discovering he was too tall to be an astronaut Elvis started his own space program.

28. The most rare Elvis recording is of his live "The King's Klezemer Kavalcade" recorded in 1971 in the Catskills.

29. Elvis once used his karate skills to defeat an entire ax gang.

30. For Elvis, no day was complete without prank calling Robert Goulet. Elvis pretended to be a DJ calling from a local radio station. He told Goulet he was giving away a fabulous prize and the first lucky listener to drop by the station would collect. As a result, employees at KXPT Las Vegas thought Goulet was “nutty as a sack of pecans.”

31. Given a choice, Elvis preferred several tiny marshmallows to one large one in a mug of hot chocolate.

32. Elvis beat Chuck Norris so badly in a karate fight...

33. Elvis hated the word smudge. He would punch anybody who said it.

36. When asked about Ann Margaret, Elvis would often smile and say "Yeah, she is pretty!"

38. When in Vegas, Elvis would often call Sammy Davis, Jr. and demand he bring him a Clark Bar. When Sammy refused, Elvis would yell "Well, you don't seem like much of a candy man to me!"

39. Elvis was pretty adamant in his position that Submariner was superior to Aquaman.

40. Whenever Elvis played Monopoly, he insisted on being the thimble, and he refused to utilize that house rule where you put fees in Free Parking and then whoever lands there gets them. "That's just too much, luck, Jack!"


41. If you play In the Ghetto Backwards you can hear somebody saying what sounds like, "Ottehg eht ni."


42. During Gandhi's hunger strike, Elvis would call daily to offer him a peanut butter banana and bacon sandwich. He genuinely wanted to be helpful.

45. Elvis had the bomb even before the British.

46. Richard Nixon made Elvis an honorary commissioner of the Federal Reserve, complete with voting rights.

47. Elvis made most of his money as a striker for Manchester United.

48. In addition to his love of gospel, Elvis also studied Qawwali,the devotional music of Sufis, which is credited with helping him maintain his voice.

50. While serving in the army Elvis met and befriended a young Andre the Giant. The 1959 single “Big Hunk of Love” was inspired by their friendship.

51. Elvis was allergic to his own hair color, which is why he dyed it black.

52. Elvis once got into a Scimitar duel with the Sultan of Brunei.

53. In order to save on maintenance costs, Elvis and Charlie Hodge became certified TV Repairmen.

54. Elvis had a private subway that ran from Graceland to the basement of Godfather's Pizza in Overton Square

56. Elvis was once offered the role of the zeppelin pilot in a film called "HindenBoogie"

57. Elvis once threw an urn at Slim Whitman's head.

58. While in the army, Elvis was used as a subject in the MK-Ultra experiments.

59. Elvis would often rent out the Memphian theater to enjoy private showings of the films of Ingmar Bergman.

60. Elvis used to rent out Libertyland for parties and would amuse guests by playing "Whack-A-George-Klein"

63. Elvis Presley bought Graceland because he thought it was cool that it was on a street that had his name on it.

64. Elvis sometimes felt that cucumbers were spying on him.

65. When he was not performing, Elvis would often wear a beard of bees for days at a time.

66. Elvis only discovered his musical powers after he watched a robber shoot his wealthy parents in an alleyway.

67. Elvis would often leave pies cooling on a window sill only to have them stolen by lovable neighborhood scamps.

68. Portrayed Avery Schreiber in three episodes of Chico and the Man. 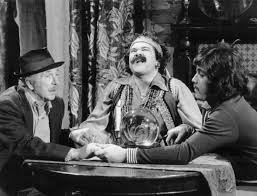 69. Elvis once fought alongside the armies of man and dwarf to put down the Dark Lord Sauron and save Middle Earth.

70. Elvis created a chain of yogurt shops called "Taking Care of Business Yogurt". This was later shortened to YOLO.

71. Elvis' final thoughts were of Rosebud, a sled he had as a child which symbolized lost innocence, youth and the love of his mother. We think. It's up to interpretation.

73. Elvis played bass for a few months in KISS in 1976. His face makeup theme was "The Catfish"

Fly on the Wall is compiled by Chris Davis with funniness provided by The Wiseguys.