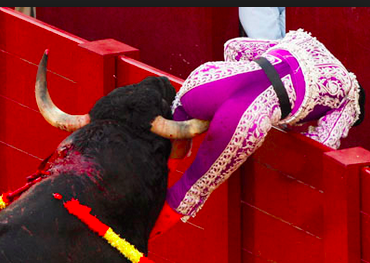 In case you missed it, a 20-year-old Ole Miss student named Benjamin Milley was gored by a fighting bull during the Carnival del Toro festival in Ciudad Rodrigo, Spain.

The key quote here comes from the surgeon who says the injury wasn't the worst he'd ever seen, but it was the largest he'd ever had to operate on: "The operation took three hours to repair damage to thighs, sphincter, and back muscles."


While this is not a video of the actual event, it may give readers some sense as to what just such an encounter between bull and human might look like.