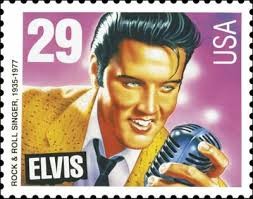 Okay, okay, it's technically a "forever" stamp. Same idea.
U.S. Postal Service will dedicate the new Elvis Presley forever stamp August 12. At Graceland. During Elvis Week. Can we get a "hell yeah," and an "American Trilogy," please?

Presley is only the sixth inductee in the USPS Music Icon Series, but the second Sun Studio recording artist. Johnny Cash became a forever stamp in 2013. Other icons in the series include Ray Charles, Jimi Hendrix, Janis Joplin, and Lydia Mendoza.

Postmaster General Megan Brennan says a preview of the stamp will be available at a later date.

“Elvis is a natural addition to our Music Icon Series. His life and talents are an incredible story. Spanning from his humble beginnings in a Tupelo, Mississippi, two-room house to becoming one of the most legendary performance artists of the 20th Century, Elvis Presley’s works continues to resonate with millions the world over.”

The obvious hashtag for tweeting and such: #ElvisForever.