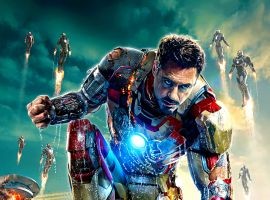 Memphis looms large in American pop culture history, and your pesky Fly on the Wall likes to keep readers informed when the Bluff City’s notably name-checked in movies, TV shows, comic books and other media. For example, the rooftops of Uptown were showcased in Invincible Iron Man #4, which was originally published last December, but just became available to digital Marvel Unlimited subscribers last week.

Here's the shot: Billionaire industrialist/Golden Avenger Tony Stark was supposed to visit sick kids at St. Jude Children's Research Hospital but, in typical Stark fashion, he forgot about the appointment and tried to bail.

Always the futurist Stark anticipated this craven moment and pre-recorded a video of himself shaming his future self for being such predictable dick. So, of course he goes to St. Jude, brings his Iron Man armor, and has a great time with all the kids. Well, until Dr. Doom shows up and things get weird.

So yeah, the images aren't all the Memphis-y. Even the rooftop conversation with Doc. Doom is pretty generic. Nevertheless, that happened.