Matthew Hill and Bill Ketron foresaw tragedies like what happened in Charlottesville, VA and attempted to make the world a safer place -- for terrorists

On Saturday, August 12, 2017, a nazi sympathizer killed one person and injured many more when he drove his car into a group protesting the White Supremacist rally in Charlottesville, VA. With that in mind, now seems like as good a time as any to take a look a pair of Tennessee politicians who were farsighted enough to imagine just such a scenario and introduced legislation to make drivers immune from civil liability for doing something similar.

Tennessee Rep. Matthew Hill (R-Chumpsville) is a "firebrand Southern conservative." Swipes right for tort reform, the Ten Commandments and good old-fashioned nullification; left for abortion and taxes. Hill's the owner of Right-Way marketing and the host of Bible Buddies Radio. He's super against child rape but favors fear-mongering legislation and thinks sometimes rolling over protesters in your SUV is totally justifiable. Hill has been a vocal proponent of birtherism, the racist conspiracy aimed at delegitimizing Barack Obama's presidency. (For fun, here's a recording of our Bible Buddy interviewing birther gadfly Orly Taitz.) In 2010 Hill introduced HB2685,[24] requiring employees to only speak English in Tennessee workplaces. Hill was called out by media for taking a "dangers of Islam"  fact-finding trip courtesy of the Tennessee Freedom Coalition, a designated hate group according to the Southern Poverty Law Center.

Bill Ketron (R-Suckertown) has sponsored many bills but, apart from making it okay to run over protesters if you're using due caution, the Senator from Murfreesboro is probably most famous as the national laughingstock who mistook a mop sink for Muslim prayer basin. And had a spell about it.

When he's not hard at work pushing legislation crafted by white supremacist David Yerushalmi to criminalize Sharia Law, Ketron has also made time to see the world courtesy of the Tennessee Freedom Coalition, a hate group that dines well, apparently.

Ketron wasn't the only Tennessee Senator who thought this idea had merit. SB0944 Passed on first and second consideration and was assigned to General Subcommittee of Senate Judiciary Committee. 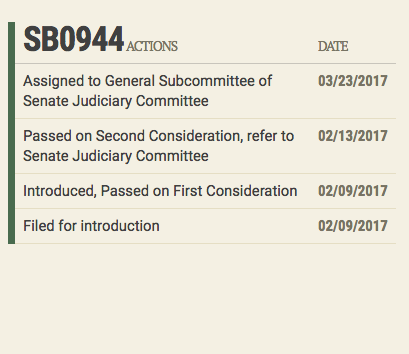