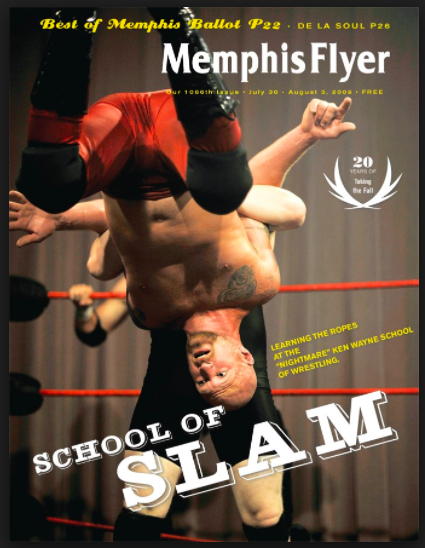 The most exciting part of moving offices after decades in one place is the archeology — all the lost and forgotten wonders you find along the way. I recently cranked up an old G4 laptop with a badly damaged screen and a keyboard that only half worked to see if it contained any photos or files I wanted to keep. The machine I hauled across Louisiana and Mississippi in the wake of Hurricane Katrina, and barely saved from being  trampled by police horses while covering protests in St. Paul, was shockingly clean and mostly broken. I did, however, find and extract a crudely-made half-hour documentary titled "School of Slam" about a wrestling in school in West Memphis. Finding this was exciting for a couple of reasons but mostly because I thought the video — originally created as a "web extra" for a Memphis Flyer cover story about Mid-South wrestling culture — was lost forever during an update of memphisflyer.com.

Technology changes so fast it's funny to compare the future you once imagined with the future we got. 8-years ago I bought a Flip digital video camera and thought it would revolutionize how I prepared long-form stories. Why not shoot all my interviews and fact-finding? Why not develop stories and lo-fi web documentaries simultaneously? Sounds like a reasonable plan, right? My first (and only) real attempt to work this way resulted in "School of Slam," a Memphis Flyer cover package and short documentary about students at the Nightmare Ken Wayne School of Professional Wrestling. The whole process wound up being more work than I'd anticipated. It took forever to assemble using the slow-moving gear at my disposal, and while the story found its audience, the accompanying video hardly seemed worth the effort. Looking back, knowing it was made with an $80 camera, a zero-$ budget, and a whole lot of desire to create as much regionally flavored content as I could with what I had, it's not a terrible effort, and entertaining top to bottom. I couldn't wait to re-share the "lost" package.

This is the point in the story where things start to go dark.

Before posting I wanted to check in and see if the school was still open. What I discovered was unsettling. Last year the school's namesake Nightmare Ken Wayne was sentenced to 20-years in prison for child pornography.

From The Clarion Ledger:

The former professional wrestler known as Nightmare Ken Wayne has been sentenced to 20 years for child exploitation, officials said Thursday.

Attorney General Jim Hood announced Wednesday afternoon that Kenath Dwayne Peal, 57, of Horn Lake will serve five years and spend 15 years in post-release supervision after he was found by investigators with the attorney general's Cyber Crime Unit and the DeSoto County Sheriff's Department to have numerous images and videos of child pornography. He was arrested in September 2014 by the attorney general's Crimes Against Children Task Force.

Now that you know the rest of the story, to borrow a line from the late radio personality Paul Harvey, here's the original "Flipumentary" — School of Slam.