Gabriel DeRanzo and Greg Cravens seem like unlikely partners. Cravens is a veteran illustrator, cartoonist, and comic strip creator. DeRanzo has a sterling reputation as a bartender, but when he and Cravens met at 901 Comics in a networking session for artists interested in contributing to Bad Dog comics first Memphis-made anthology of graphic fiction, he had no idea what he was doing. What did the inexperienced DeRanzo possess that nobody else had? A completed script. According to Cravens, who's been around the block a time or two, that made all the difference.

“Other people may have had ideas,” Cravens says, explaining why he gravitated toward DeRanzo. “But he had a completed 5-page script.” According to all involved, it wasn’t a very good 5-page script, but it was a spark — a beginning. There were plots to be hammered out and characters to develop. There was also an ethos to explore: The weed should be freed — and it would be too if not for those meddling, “Pharmaceutical companies, the alcohol industry, and organized crime," and money spent on “politicians to keep it illegal.”

The meet-up where DeRanzo and Cravens first teamed up is part of the origin story for 901’s house brand, Bad Dog Comics, which published its second anthology earlier this month. Bad Dog will soon publish the second installment of DeRanzo and Cravens’ Stoned Ninja, which is currently receiving its finishing touches. Meanwhile, the creators continue to produce t-shirts and other fun, useful merchandise that, if things go according to plan, may ultimately position Stoned Ninja for wider distribution than most indie comics ever see. What has Stoned Ninja got that other indie comics don't? Its own brand of ninja-approved, 100 percent hemp rolling papers, that's what. 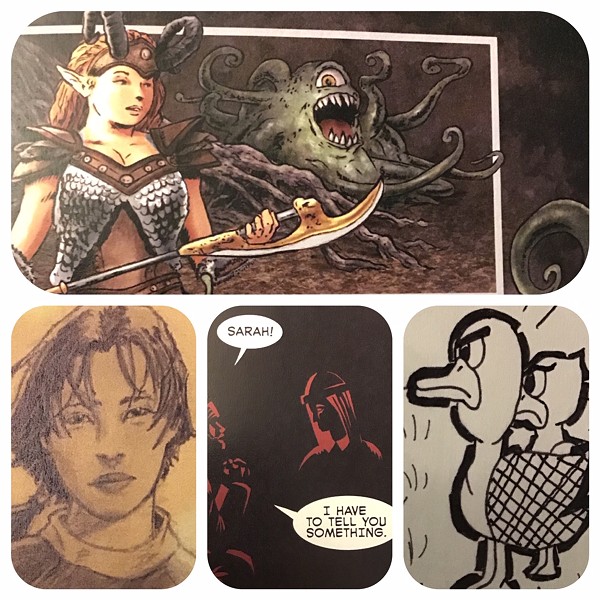 “When I was a kid, comics were in every grocery store and quickie mart in the country, and they aren’t anymore,” Cravens says explaining the potential for head shops to expand comic distribution. “The market has narrowed down to where you have to go hard target search for a comic shop to go get comics,” he says. “What we’ve got is something we can sell in another store to another targeted audience. So, that’s the pitch when we approach larger publishers. There are potentially 25,000 more shops you can put your comic into, if you’ll just pay attention.”

“Given the content of the comic I figured there was no reason to go less than 100% pure hemp,” DeRanzo says of Stoned Ninja rolling papers. “So it’s as good a quality paper as anything out there and we’re offering fun packaging. On the inside flap there’s a comic and we’re going to change that flap every time we put in a new order. So Stoned Ninja will be like Bazooka Joe Bubble gum.”

Stoned Ninja was originally inspired by the classic Kung Fu comedy Drunken Master, and developed as a means to explore pot culture beyond the usual burnout stereotypes.

“So I asked myself, if there can be a Drunken Master, why can’t there be a Stoned Ninja?” DeRanzo says.


Don’t anticipate kung fu Cheech and Chong, or Jackie Chan-inspired antics, even. Stoned Ninja is packed with fun stuff. Pizza boxes (featuring DeRanzo’s face) make cameos. The hero, Japanese American college student Kazunori Takagi, appears and disappears in clouds of dank smelling smoke. But, for being the story of a young man granted ninja superpowers by toking on a special strain of marijuana, the narrative content is fairly straight-faced.

For 10-years DeRanzo daydreamed about Stoned Ninja while he tended bar. “I had this insane amount of story content for movie ideas,” he says says. Comics weren’t in the plan so when Shannon Merritt from 901 said he wanted to start making comics DeRanzu said, “That’s great, I will buy your comics!”

“No,” Merritt answered. “I want you to help me make these comics.”

One problem: DeRanzo couldn’t draw. Okay, two problems: He had no experience writing either. But the characters were there. And after a decade of thinking about it, the stories were there too. So DeRanzo leaned on Cravens’ experience in graphic storytelling, and Cravens trusted DeRanzo’s vision. Inker Josh Lindsey has since joined the team.

“I drew the knives all wrong,” Cravens says, admitting a learning curve of his own. DeRanzo gave his illustrator some sharp examples as a gift. “I nearly cut my toe off twice,” Cravens says of his sample cutlery experience. But now his knives are proper. 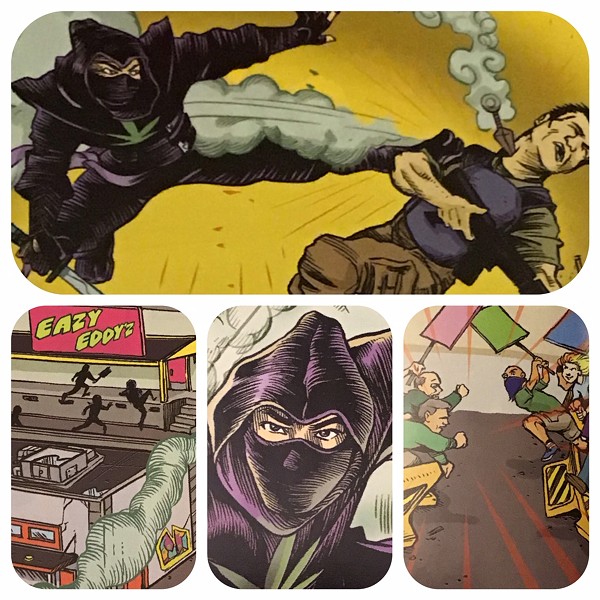 "Right now we're trying to build the first six issue story arc at a pace that lets us be normal people. Once it's done we plan to release it on a monthly schedule. Ideally going mass distribution," DeRanzo says.

For the completely appropriate price of $4.20, comics are available locally at 901 Comics, Whatever stores, The Wild Hare smoke shop, Tobacco Zone, and Memphis Made Brewery. Stoned Ninja starter packs, which include a comic book, a t-shirt, and a pack of Stoned Ninja rolling papers are available online at stonedninjacomics.com.