Memphis In May Scientist Warns Against Dinosaurs In Tom Lee Park 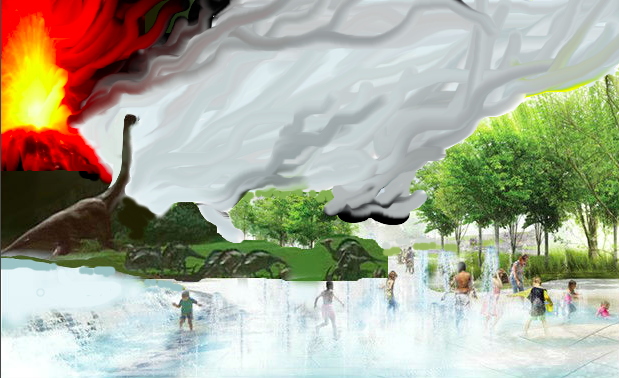 Dr. Ian Malcolm, Senior Chaos Theorist for Memphis In May, warned of grave danger to the public if a plan devised by the Memphis Riverfront Public Partnership (MRPP), to exhibit genetically engineered dinosaurs in a newly revamped Tom Lee Park, is allowed to go forward.

“Life will find a way,” the dashingly handsome, black-clad scientist told an enraptured crowd at a recent public forum on the proposed revamp of the city’s premiere riverfront acreage.
"I simply cannot guarantee the safety of the food trucks and merchandise vendors in such a situation.” — Dr. Ian Malcolm click to tweet

MRPP was represented by Dr. Perceval Petrodopolos, a paleo-genetic engineer who said new advances in CRISPR technology has enabled him to reconstruct the genomes of dinosaur species that have been extinct for millions of years. The dinosaur DNA material was recovered from blood found in the stomachs of mosquitoes trapped in amber and spliced with that of dinosaur descendants such as frogs and birds. Plans and renderings unveiled by MRPP showed brontosaurus, tyrannosaurus rex, and velociraptors playing whimsically with school children among the rolling hills of Tom Lee Park.

“The lack of humility before nature that’s being displayed here staggers me,” said Dr. Malcolm, pounding the table. “Don’t you see the danger in what you’re doing here? Genetic power is the most awesome force mankind has ever seen, but you wield it like a kid who has found his dad’s gun!”

“I don’t think you’re giving us our due credit,” said Dr. Petrodopolos. “I have done something that has never been done before!”

“But you were so preoccupied with whether they could, you didn’t stop to think whether you should,” replied Malcolm. “Isn’t that right, Dr. P.P.?”

Dr. Malcolm described the prospect of revived, probably carnivorous thunder lizards  sharing a park with some of the top musical acts in the country and tens of thousands of revelers during the Beale Street Music Festival as “chilling. I simply cannot guarantee the safety of the food trucks and merchandise vendors in such a situation.”

Dr. P.P. was incredulous at what he called “Luddism from a scientist” and questioned why Memphis In May even needed a chaos theorist on staff.

“Have you ever been to Music Fest?” replied Dr. Malcolm.

City officials are expected to rapidly approve the Jurassic improvements to Tom Lee Park, which will include pterodactyl roosts on the heavily populated bluff overlooking the riverfront.
————————————————————————————
YES! This article is a parody. We said so in the tab up top!