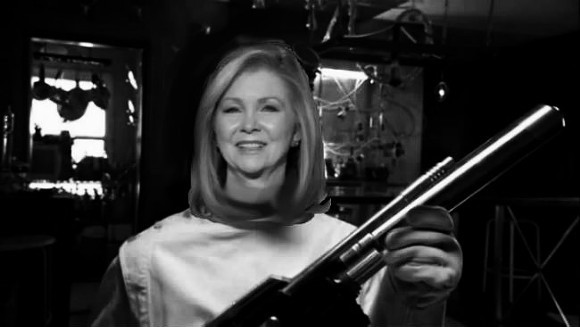 In an act of cold-blooded not giving a shit, Senator Marsha Blackburn created a fictional Memphis police officer then murdered him in a press release. She was responding to a tragic, true-life event that climaxed with the death of an African-American male following a confrontation with U.S. Marshals.

"My prayers are with the family of the fallen officer," Blackburn wrote, expressing her shared grief with the imaginary wife and children of a true fake hero.

“We can’t let the fact that Blackburn’s police officer is a complete fabrication and probably a fantasy expression of her thinly veiled racism obscure the fact that she also killed the man,” says the University of Midtown’s frequently cited Crypto-criminologist Roger Datt.

In an act of cold blooded not giving a shit, Senator Marsha Blackburn created a fictional Memphis police officer then murdered him in a press release. click to tweet
While some observers have suggested that Senator Blackburn is an evil genius posing as a simpleton, Datt thinks this description misses the point. “What she is is a murderer,” he says. “Sure, she retracted her original statements. But what good did that do? The bad information was already circulating, and a fictional officer was already dead.”

Popular political commentator Helmut Mann offered an opinion as to why Blackburn would create a fictional police officer only to murder him. Mann, known for his cheeky, Nazi-light views, and for being a snappy dresser, says there's only one thing we can know for sure.

“This is most definitely not rooted in deeply held white supremacist values,” Mann says, offended by the very idea. “Nor is it a lazy, but effective projection of racist cliches designed to stimulate a political base or gin up unrest, and the need for strong authoritarian action. To even suggest something like that should be punishable by disembraining.”

Memphis activist Bing Hampton has organized a memorial for the dead officer who was never alive in the first place. “It’s bad enough that this event resulted in the actual death of a civilian of color,” Hampton says. “But the senseless death of an innocent, imaginary, probably white police officer is just too much to bear.”

“Blackburn is a true freedom fighter who’s struggling to ensure that everybody, including hostile foreign governments have a say in our public elections,” Mann asserts. “If she killed an imaginary police officer, you can bet your last ruble he probably deserved killing.”
——————————
Yes, this article is a parody. We've said so twice already!