The Memphis Grizzlies: Heartbreak and Hope

The late Bart Giamatti — commissioner of Major League Baseball at the end of his life — described his favorite game as being “designed to break your heart.” Giamatti was a wise man, and he was right about baseball. But doesn’t the same hard truth wrap itself around all professional team sports? Forced to say goodbye to the 2011-12 Memphis Grizzlies, aren’t we victims to precisely the kind of heartbreak Giamatti described in poetic form?

There are 30 NBA franchises. If the only pure form of joy is winning a championship, then the fan bases for 29 teams must endure the offseason with at least a degree of disappointment, if not utter heartbreak. Every year. (Let’s add the fan bases of NFL and MLB teams to the mix, and you have 89 of 92 legions of towel-wavers forced to dry the tears of also-rans one year after another.) There’s a cold permanence to a season-ending loss, even though we know our favorite team will suit up again, share our optimism of a new season, and fight toward the same challenge we had to concede most recently. But the offseason, as it begins, feels like the first day of school.

Had you suggested through the din at FedExForum during Game 1 of the Grizzlies’ series with the Los Angeles Clippers — Memphis up by more than 20 in the fourth quarter — that L.A. would win the series despite the Grizzlies taking a game in California, you would have learned the taste of a brand-new “Believe Memphis” growl towel. Looking back over the last two weeks, this is the heartbreaking element of the games Memphis fans will be reviewing (teeth grinding) over the next six months. There were so many chances for the Grizzlies to seize control of the franchise’s first series with home-court advantage.

Even with the collapse late in Game 1, Rudy Gay had a shot to win the opener and cure a bad-loss hangover before it could even take hold. Had but one errant shot in Game 3 found its mark, the difference would have been a Memphis win and a 2-1 series lead. Any game that requires an overtime period could go either way, but Game 4 went to the Clippers. That close to a four-game sweep, and today’s column being a forecast of a Grizzlies-Spurs rematch.

The NBA belongs to its superstars. The formula has long been securing a star worthy of an ad campaign, adding a big-name sidekick, and making sure the supporting cast gets out of the way as the trophy is being shined. Which makes the Grizzlies’ loss to Chris Paul, sidekick Blake Griffin, and the Clips so much more disheartening. Because we know the superstar formula doesn’t always hold. It didn’t last spring when the Grizzlies took down four-time champion Tim Duncan and San Antonio. It didn’t in last year’s Finals, when Dallas upset LeBron James, Dwyane Wade and a Miami team that seemed to take the formula to its ugliest, most expensive extreme. Match up the Grizzlies’ starting five with the Clippers’ starting five and the edge belongs to Memphis. Still. But it was the Clippers who somehow took control of the final quarter of Game 7 ... with their superstars combining to score two points. Ouch.

Just as teams evolve, so do fan bases. Memphis NBA fans didn’t know the thrill of a playoff series win until last year, the franchise’s 10th here in the Bluff City. And honestly, Memphis fans didn’t know real playoff disappointment until Sunday afternoon, when Mother’s Day got all too gloomy because of a basketball game. The faces we’ve made familiar over two playoff runs now — Tony, Z-Bo, Rudy, Marc, and Mike — will hardly fade from our consciousness. But they won’t be smiling, screaming, gritting, or grinding for a summer suddenly too long.

Late Sunday afternoon, my family took a walk around our neighborhood. It was entirely pleasant, my wife the center of our attention (a championship mom). We rounded a corner and I heard a basketball being dribbled at the end of a driveway. A boy — looked to be about 10 years old — was shooting on his own, his shadow longer than his actual height as the sun managed to split a few clouds. He was wearing a number 9 Tony Allen jersey. Enough to make you believe. 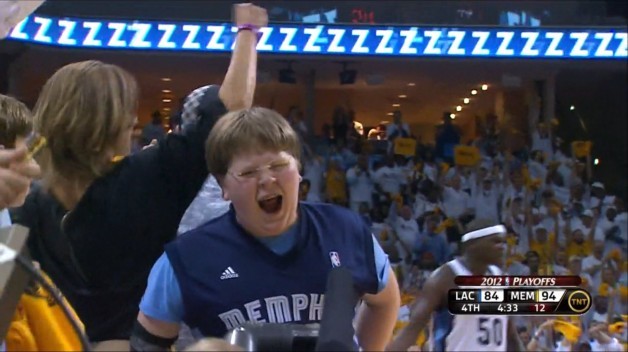