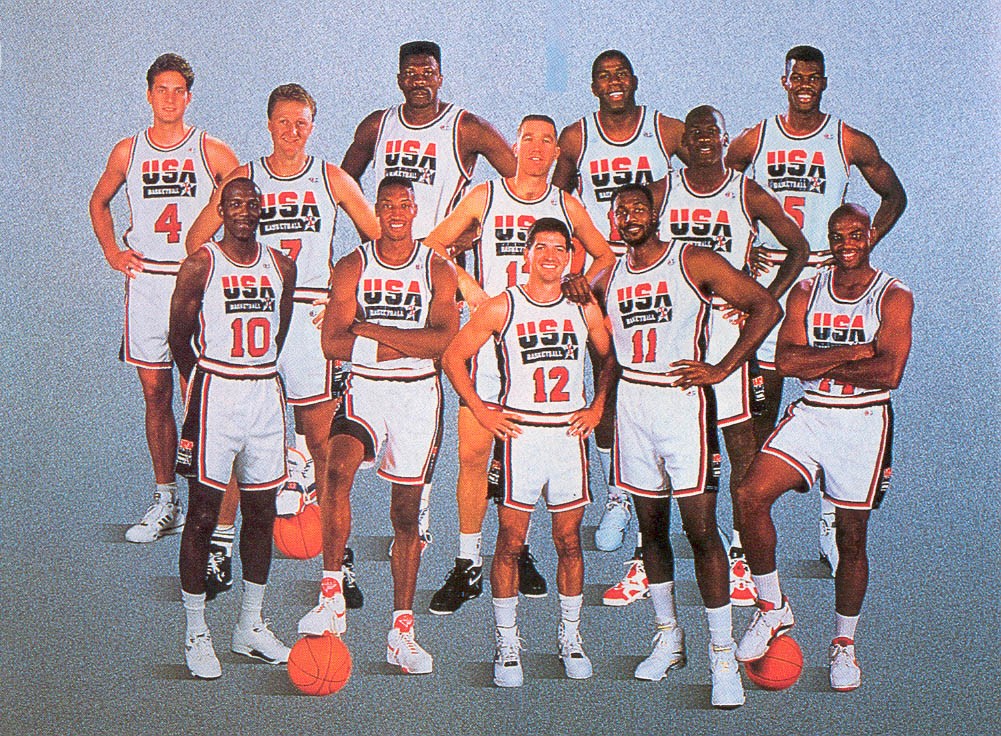 I love the cross-country verbal feud that surfaced last week between a pair of basketball legends. When current star (and 2012 Olympian) Kobe Bryant suggested this year’s “Dream Team” could handle the original version of 20 years ago, a retired legend — and to many, the greatest player ever to don sneakers — argued quite publicly to the contrary. Always wondered what Kobe vs. MJ might look like? This may be the closest we’ll ever get.

This kind of debate is manna from a sports historian’s heaven. It goes beyond scores, stats, or standings. It goes beyond a number of championship rings (Jordan has six and Kobe five, in case you insist on keeping score). It goes beyond jersey sales and contract figures, endorsements and special appearances. (Kobe has never starred alongside Bugs Bunny.) This kind of cross-generational feud is about that most basic sports ingredient ... competition. Rivalry. Bryant stands by his current cohorts in red, white, and blue. Jordan stands up for his bunch (Magic, Larry, Charles, etc.) from another era, perhaps, but as alive today for most basketball fans as they were in embarrassing international competition in Barcelona.

If modern sports fans have a shared weakness, it’s living too much in the moment. Worse, they tend to live for what’s to come at the expense of what has been achieved. Let’s check NBA jersey sales next December. I’m willing to bet David Robinson’s gold medal (he played for the 1992 Dream Team) that Hornet rookie Anthony Davis will sell more jerseys than living legend Tim Duncan. A 15-year veteran with four championships and two MVP trophies, Duncan signed a three-year contract extension with his Spurs last week and got less national attention for doing so than various players being “amnestied” (waived) by clubs in cost-saving decisions. Many call Davis the next Tim Duncan ... while we still have the actual Duncan to watch, admire, and emulate.

How would the 1973 Memphis State Tigers fare against Keith Lee’s 1985 crew? (If UCLA couldn’t bottle up Larry Finch, I can’t see Andre Turner or Baskerville Holmes pulling the trick.) Could the Whiteyball Cardinals of 1982 handle Tony LaRussa’s Wild Cards of 2011? If only we could see Nick Saban’s 2011 Alabama squad confront Bear Bryant’s fabled 1965 champs. Pull up a seat and we’ll debate who’d win these contests, and, while we’re at it, try and concoct a time machine that would allow such a treat.

I didn’t forget the quotation marks in my reference to the ’92 Dream Team. The only mistake that squad (and its coach, Chuck Daly) made was not copyrighting — once and forever — the catchy name it adopted in making basketball history. When the Olympic team (including Memphian Penny Hardaway) four years later was called “Dream Team III,” the moniker was ruined. (The team that competed in the 1994 world championship, believe it or not, was called “Dream Team II.”) Now 20 years later, anointing the latest band of NBA All-Stars a “Dream Team” is patently offensive. There was, is, and will always be only one Dream Team, whether or not they’d win a game against another band of ballers.

When I look at the roster of the 2012 U.S. Olympic basketball team, I count four players who, if they stay healthy and perform at their current level at least 10 years (one already has) are certain Hall of Famers: Bryant, LeBron James, Kevin Durant, and Chris Paul. Three others are possibilities, though with much still to accomplish for Hall status: Carmelo Anthony, Kevin Love, and Deron Williams. As for the other five (Tyson Chandler, Russell Westbrook, Andre Iguodala, James Harden, and Anthony Davis himself), you tell me. A great team, but hardly dreamy.

When pondering how Jordan and company might handle today’s Olympians, you’d do well to remember the apocryphal tale of Ty Cobb at the middle of the twentieth century. A man who competed against Cobb decades earlier was asked how the great Tiger hitter would do against modern pitchers. According to legend, the man replied, “I think Cobb would hit about .330. Of course, he’s 64 years old.”